Wondering if the Bengals and Bills will be on television where you are? The TV coverage map is out and holds your answer.

As one can only imagine, the Cincinnati Bengals and Buffalo Bills really isn't generating that much interest outside the scopes of Bengals and Bills fans. In fact, with ESPN on at my office on Wednesday, I was led to believe that the New Orleans Saints and New England Patriots were the only games being played.

The Bengals ARE playing this weekend and they ARE on television... in most of Ohio, Kentucky and scattered locations in Indiana, North Carolina, South Carolina, Illinois, Georgia, Florida, Louisiana, and Arkansas. It's possible that Buffalo and the surrounding markets won't have the game if they're unable to move nearly 7,000 tickets by 1 p.m. on Thursday (Friday if they're granted an extension). 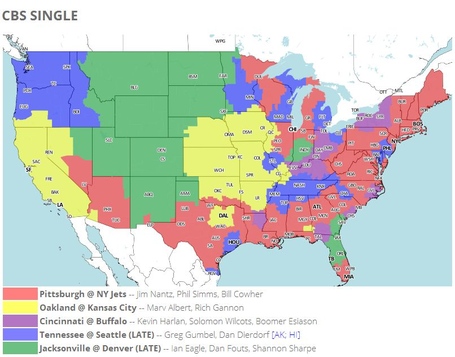 Fox has the double-header this week. Cincinnati will have the Green Bay Packers and Baltimore Ravens during the early game and then New Orleans at New England for the late game.