Curious to see if the Bengals and Browns will be shown in your neck of the woods? We have your answer.

Share All sharing options for: Bengals vs. Browns: TV Map

If you're looking forward to Cincinnati's return to Paul Brown Stadium this Sunday, you're not alone. After playing consecutive games on the road in Miami and Baltimore, the Bengals will play their first home game since beating the New York Jets on Oct. 27.

However, if you're not in the state of Ohio or at least in the Cincinnati region, you might be forced to locate alternative options to watch Sunday's Battle of Ohio. 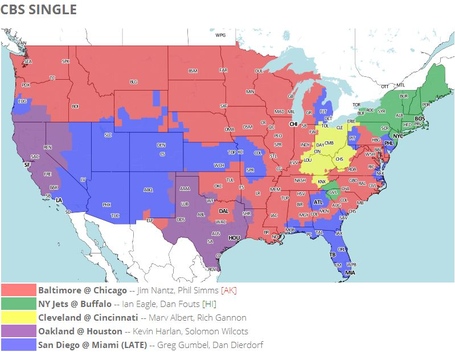 Fox has the double-header this weekend but Cincinnati will only get one game due to NFL regulations. However, once Cincinnati's game against the Browns concludes, Cincinnati (and most of the country) will get the San Francisco 49ers and New Orleans Saints.