With the upcoming game on Sunday, I thought I would enlighten you with a little info and smack talk about the Browns

Share All sharing options for: 5 things to keep in mind for Browns Bengals this Sunday - Smack edition

Ahhh, Browns week. As we have discussed, this is a big game for both of these teams. Rarely has a Bengals Vs. Browns game mattered so much for both teams this far into a season. So as you watch the Bengals exact revenge against the Clefeland Stains, keep the following in mind. 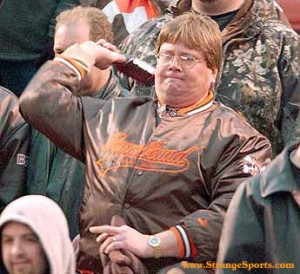 1. The Dawg Pound - ok, the concept is kind of cool. Get all of the most rabid fans, seat them together and make the stands behind the end zone very intimidating for the other team. Where Cleveland fails is the execution. For example: team officials banned the carrying of dog food into the stadium, as fans would shower the visiting team with Milk-Bones, along with other objects. In the fourth quarter of a 1989 game against the Denver Broncos, the rain of batteries and other debris coming down from the bleachers was endangering the safety of the players. At the final game at Cleveland Stadium in 1995, members of the Dawg Pound ripped the bleachers from the stands (many having brought wrenches, crowbars, and other tools to dislodge the seats), and tossed them onto the field.
This is the same thing that prisoners do in prison riots, way to bring that kind of class to an NFL football game Browns fan.

2. Staph - One of the chief exports of Cleveland since the decline of industry there has been the staph infection. Kellen Winslow blows out a knee and the team sends him to the Cleveland Clinic and he becomes one of far too many players to contract staph infection after surgery. LeCharles Bentley, a fan favorite, was born and raised in Cleveland and cries as he is interviewed putting on his uniform for the first preseason practice. On the first 7 on 7 drill he is hurt and never plays a game for the Browns. He suffers multiple staph infections and almost loses his leg. Joe Jurevicius plays almost 2 seasons before suffering a knee injury. He is sent to the Cleveland Clinic and he contracts not one but two different staph infections and may never play again.

To top it off, Winslow opens up to the media about the staph infection problems with the Browns and the team suspends him for conduct detrimental to the team.

3. The people of Cleveland hate Cleveland - Cleveland as a city has declined from a population of 914,000 in 1950 to less than half that today. The mass exit can be attributed to many things, but mostly is a testament to how bad the city sucks. The Plain Dealer (the local city newspaper) found that the higher a young person's education degree, the more likely said person was to move out of Cleveland.

4. The Environment - The Cuyahoga River at one time was one of the most polluted rivers in the United States. The stretch from Akron to Cleveland was devoid of fish. There have reportedly been at least thirteen fires on the Cuyahoga River. The largest river fire in 1952 caused over $1 million in damage to boats and a riverfront office building. Fires erupted on the river several more times before June 22, 1969, when a river fire captured the attention of Time magazine, which described the Cuyahoga as the river that "oozes rather than flows" and in which a person "does not drown but decays."

5. The Mistake by the lake - The city has high unemployment, dismal weather, hefty taxes, corruption and mediocre sports teams, all of which have propelled it to the No 1 position in the Forbes.com list: most miserable city in USA. "Cleveland nabbed the top spot as a result of poor ratings across the board. It was the only city that fell in the bottom half of rankings in all nine categories," Forbes said on its website.
The rankings are based on jobless rates, inflation, taxes, commuting times, crime rates, performance by the city's sports teams, weather, pollution and corruption by public officials.