The third-year wide receiver took the blame for Dalton's first quarter interceptions on Sunday. Dalton called it miscommunication between the two.

The one thing about A.J. Green, which differs greatly from his predecessor in Chad Johnson, is that when his quarterback throws an interception, he takes a majority of the blame. Not fighting aggressively for an underneath pass, miscommunication, or missing a read that Andy Dalton saw; whatever it is, Green acknowledges his own mistakes when they happen.

That was the case on Sunday as Andy Dalton threw two first quarter interceptions -- leading to Michael Johnson's disapproval when fans justifiably booed a team on a two-game losing streak and watching the postseason slip through their hands.

Dalton's first interception came with 4:10 remaining in the first, from Cincinnati's 20-yard line. A.J. Green is bunched to the right with Browns cornerback Joe Haden sitting less than ten yards off the line of scrimmage. 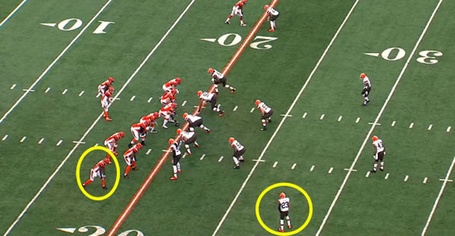 Green reaches the 25-yard line and slows while Haden, staring intently at Green and Dalton, sits five yards off.

Now Green has two options: Go inside or outside. If he goes inside, he has a linebacker to contend with (the safety was picking up Gresham's go-route). If he sits or goes out, he has position against Haden for the easy reception. Since the "out" had more open space, Dalton believes that's the route that Green would run; it was the proper read for Dalton, who expected Green to be there. 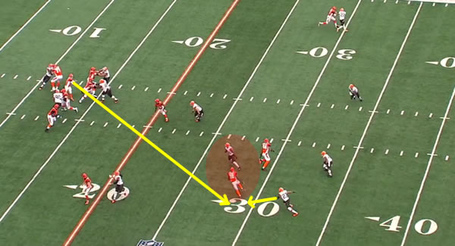 Instead Green runs directly into coverage, leaving Haden with a wide-open opportunity to pick off Dalton's pass. Green recognized that his read was off, accepting the blame for Dalton's interception.

"The linebacker dropped underneath. I have to go to the outside on that," Green said via Bengals.com. "It's my fault, I think I could have filled that. He was throwing to the open spot. And I was thinking about wrapping around the linebacker. That’s stuff I need to clean up myself."

The second interception wasn't so much on Green.

On Cincinnati's next possession (and Dalton's next attempted pass), Green ran a ten-yard out with Joe Haden in coverage. Dalton appears to think that Green is running a curl-like route, but the receiver pushed towards the sidelines. As Haden jumped the route and returned the interception 29 yards for the touchdown, Green threw up his arms.

"I was frustrated. I saw the safety buzz underneath and I knew he was just sitting there because he had nothing to worry about," Green said via Bengals.com. "With his ball skills and the way he breaks on the ball, it's all over after that."

Like the previous play, if this was an option-route, Dalton was the one that misread it. As Green said, the safety ran underneath and shifted towards the sidelines whereas Dalton threw inside. 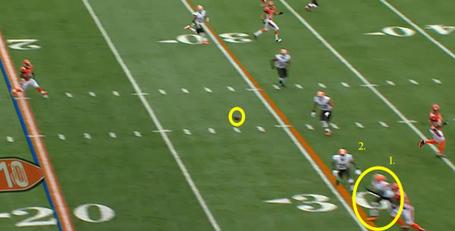 This exposed the football for Haden's pick-six.

In our view, Green should accept responsibility for the first interception but not the second -- that appeared to be a mis-read by Dalton with Haden and safety in Green's proximity.

Dalton used the word miscommunication during his post game presser.

"I think there was a little miscommunication on what exactly what we were doing," Dalton said. "Unfortunately it happened right there where Joe (Haden) was able to make those plays. We didn’t let it hurt us. We bounced back and found ways to score points and helped us get the win."

"My numbers are going to come regardless," Green said. "I'm just glad we came out with the 'W.' That's all that matters."

And that's another thing that differs from Johnson.