The Cincinnati Bengals will head to Cleveland in a game that most of the nation won't see.

Share All sharing options for: Bengals at Browns: TV coverage

The Bengals have uncharacteristically generated enough in the first three games this season, that the networks shipped their best crew for games with wide-open coverage. It was Jim Nantz and Phil Simms calling the Bengals regular season opener in Chicago. It was the Monday Night crew in Cincinnati during week two. Then it was Joe Buck and Troy Aikman at Paul Brown stadium last week.

This week, it's back to the usual routine.

Most of the state of Ohio, western Kentucky, and areas close to Cincinnati in Indiana will get the Bengals on television this Sunday. 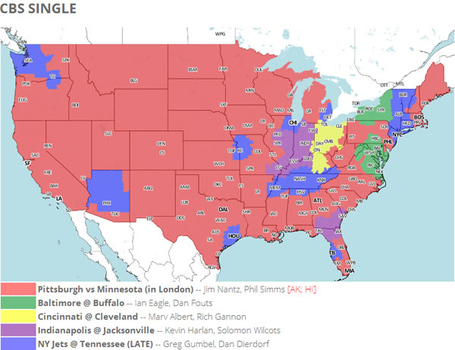 If you're in Cincinnati, the Bengals and Browns will be the lone CBS game -- while a majority of the nation will get Pittsburgh and the Vikings in London. Have fun with two team that have a combined zero wins, mates.

Other games received in Cincinnati on Sunday will be the Seattle Seahawks at the Houston Texans (1 p.m) and the Philadelphia Eagles at Denver Broncos (4:00 p.m).