Bengals vs. Browns: Sleeping on Browns secondary is dangerous

Share All sharing options for: Bengals vs. Browns: Sleeping on Browns secondary is dangerous

Cincinnati Bengals quarterback, Andy Dalton, comes into Sunday's game with a solid 3-1 starting record against the Cleveland Browns, generating eight touchdowns, 1,050 yards passing and a passer rating of 104. But it was last year that Dalton's production against the Browns really accelerated. During Cincinnati's 34-2 win on Sept. 16, Dalton completed 77.4 percent of his passes (third-highest in his career) with three touchdowns and a passer rating of 128.2 (second-highest in a single game in his career). During the week six follow-up last year, Dalton generated 381 yards passing, three touchdowns... and three interceptions.

To say that Dalton is aware of Cleveland's secondary would be an understatement. Cornerback Joe Haden and A.J. Green have been foes dating back to their SEC days and their battles are setting the stage for a war that could continue for the next 5-10 years. So far Green has held the advantage, generating 18 receptions, 344 yards receiving and four touchdowns in four career games against the the Browns (Haden only played three).

"It's not like we’re scared," Haden said via Cleveland.com. "They have to plan for us, too. It’s not all about what they’re doing, it’s about what we’re gonna do to them. We have to come out and be aggressive and put hits on people. He’s really, really talented, but you've got T.J. (Ward) and (Tashaun) Gipson over the top, lurking, ready to come across the middle if he comes across the middle."

Dalton will have to figure out a way to get the ball to Green but if trends are any indication, the Bengals star wide receiver has the momentum. In their last meeting (Bengals lost 24-34), Green posted seven catches for 135 yards receiving and two touchdowns (all career-highs against the Browns).

One was against Haden.

In fact, the third-year cornerback hasn't had much success against the Bengals. In three career games played, he's given up two touchdowns. And the game he didn't give up a score, Haden allowed 125 yards receiving and an 83.3 completion allowed rate.

"He’s got such good feet and good ball skills," Dalton said of Haden. "He’s quick. That’s the biggest thing for him, and he plays with a lot of confidence. When you've got all of those things, you've got a chance to be pretty good. He’s done a good job and he’s a really good corner."

It's not just Haden that Dalton has to be concerned about in Cleveland's secondary. At one point during Wednesday's press conference, Dalton agreed to a Troy Polamalu comparison with safety T.J. Ward, who generated the highest PFF defensive score in Cleveland last season, and the sixth-best safety grade in the NFL.

Opposing quarterbacks completed only 48 percent of their passes when targeting players that Ward covered for a quarterback rating of 60.4 last season. This year, the opposing rating has dropped to 43.1, which includes a second-quarter interception against the Vikings last week. Minnesota has second and 26 from their own 31-yard line with 5:23 remaining in the second quarter when Buster Skrine follows Jarius Wright in motion; which identifies to the quarterback man coverage. 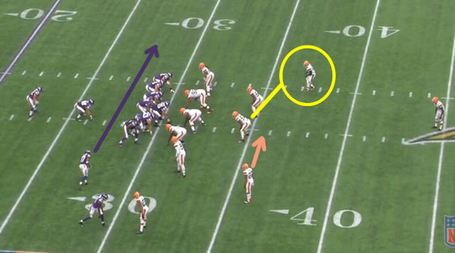 Ward shifted from the strong-side to the middle, initially covering Wright but then shadowing Christian Ponder's eyes, who was completely locked into Jerome Simpson's deep post. 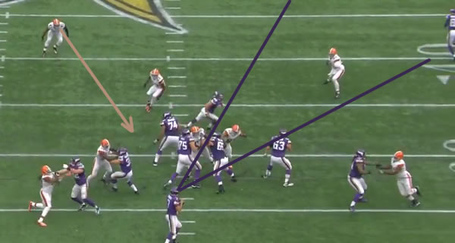 Ponder tried to float the football, but linebacker D'Qwell Jackson tipped the football and Ward, already in a full-blown sprint when Ponder released, had the presence of mind to complete the interception and return it 13 yards to the Vikings 38-yard line. Cleveland would take a 10-point lead on a fake field goal six plays later.

Along with decent instinct, Ward has impressive closing speed. With 11:38 remaining in the fourth quarter, Ponder fakes the handoff to Adrian Peterson on second and five from the Browns 15-yard line. Tight end Kyle Rudolph goes into the flats and Ward has no security blanket behind him. If Rudolph avoids the tackle, it's an easy touchdown. 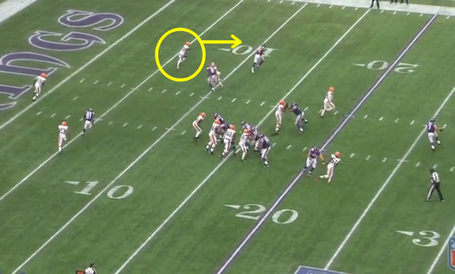 Rudolph caught the football for a three-yard gain with Ward nearly five yards away. 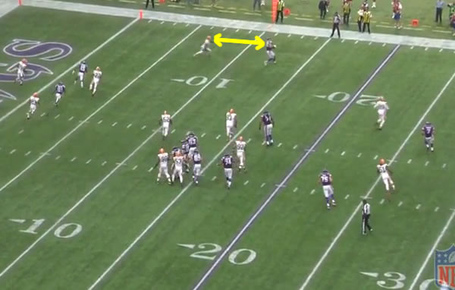 He wouldn't gain another yard.

Dalton hasn't had huge problems with Ward in their three meetings (Ward was hurt in week 12 in '11), completing five of ten passes for 70 yards and a touchdown. But he's someone that has to be accounted for.

Earlier this June, Pete Prisco called Ward the most underrated players in Cleveland.

In his third season, this hard-hitting safety improved in all areas and could have easily been a Pro Bowl player.

Ward made the PFF top-101 ranking.

Playing in Cleveland doesn’t always lend itself to having your performances rewarded with nationwide praise. So while you don’t often hear the name of Ward mentioned among the better safeties in the league, don’t think that’s a reflection on what he did in 2012. A real force in the box, Ward is more than just adequate in coverage, allowing just 12 receptions into his coverage all year.

Fellow safety Tashaun Gipson has the second-highest PFF score in coverage for the Browns this year. Along with a week one Ryan Tannehill interception, the longest pass that Gipson has allowed has only gone 15 yards. Browns head coach Rob Chudzinksi generally praised the Browns secondary for having their best game of the season last week.

"Those guys have improved. Buster played his best game," Chudzinksi said via Cleveland.com. "I think our secondary’s playing really well. Gipson is playing well. T.J. Ward had his best game, made some big plays and some open-field tackles. Joe Haden’s been outstanding all along."

Disregarding the Browns this weekend is extremely dangerous; in fact, generally looking past Cleveland for New England's arrival in Week 5 may make things complicated. Along with coming off their best game of the season against the Vikings, the secondary is playing extremely well while the Browns pass rush is ranked third with 12 sacks and Cleveland's overall defense sits sixth in the NFL.

"They played good football," said Lewis of Cleveland's performance last week. "They played aggressive and attacked, and that’s what you’ve got to do. It’s no different than what I told our football team. We’re going on the road, we've got to go play aggressive, attacking football. They did a great job of that. They faked a punt, they made the first down, made a big play. They faked a field goal, and scored a touchdown. They did some things that you've got to do, and they took advantage of what they felt were some things that schematically they thought they could take advantage of. We've got to play alert, attacking and be focused on our game."