The Cincinnati Bengals passing defense should temper the Cleveland Browns passing game, which featured three touchdowns and over 300 yards passing.

For only the third time in his career, quarterback Brian Hoyer will get the start this weekend against the Cincinnati Bengals. Replacing the injured Brandon Weeden and ineffective Jason Campbell, Hoyer generated 321 yards passing last week with three touchdowns.

It was the type of game to drive hope into an otherwise hopeless season for the Cleveland Browns this year.

"Hoyer played an excellent football game," Bengals head coach Marvin Lewis said. "He got knocked around a bit, but he stayed in there and won the game when it counted. He made big throws, big completions, big third downs. He had third-and-10 a few times and converted them. He did a nice job on third-and-10 and fourth-and-10 and was able to convert the drive."

Josh Gordan and Jordan Cameron were Hoyer's favorite targets, accounting for 30 of Hoyer's attempts. Gordan set career highs in receptions (10) and yards receiving (149) and the last time he faced the Bengals, the second-year player posted a 71-yard first quarter touchdown. Cameron tied a franchise record with three touchdown receptions in a single-game while setting another franchise mark for most receptions (20) by a Browns tight end after the first three games.

It wasn't all perfection from Cleveland's offense against the Vikings though. Hoyer may have stacked impressive numbers, but he also attempted 54 passes, completed three passes to the defense (in the final 31 minutes of the game) and was dropped three times in the final 18 minutes.

Minnesota's Harrison Smith intercepted Hoyer's second quarter pass with 51 seconds remaining in the first half. And it wasn't even a complicated pick. Gordan ran a deep curl and Smith jumped the route. 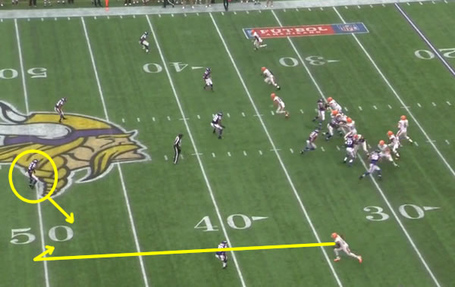 With 11:32 remaining in the third quarter, Hoyer targeted Jordan Campbell in the middle, but never saw linebacker Chad Greenway. 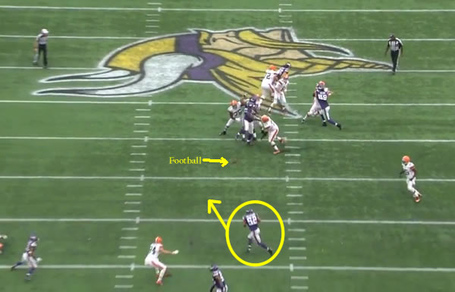 Hoyer's third interception was a floater after having his throwing arm hit in mid-throw, picked off by linebacker Erin Henderson.

Yet, when it mattered the most, Hoyer led the Browns with 18 consecutive pass attempts in the fourth quarter, completing 11 for 100 yards passing, a passer rating of 94 and a game-winning touchdown to Cameron. The drive featured a combination of slants, hooks, and flair routes into the flats. Virtually every throw utilized a quick three-count against a prevent-like Vikings defense, which depended on missed tackles from Minnesota -- they gladly capitulated. Hoyer's reads were fairly simplistic; in most cases, he had two and if the second was covered, the football landed out of bounds.

"I thought it was a gutsy performance," said Browns head coach Rob Chudzinski on Monday. "He had some turnovers in the second half, a couple of throws I know he would like to have back. But that didn’t phase him. When we needed to rise up to the occasion on the last drive, he was able to do that and make the plays ultimately that helped us win the game."

Cleveland will face a Bengals defense that may have to play without starting defensive backs Leon Hall and Reggie Nelson -- both of whom have already staged critical fourth quarter interceptions this season. Nickel cornerback Adam Jones figures to replace Hall in the starting lineup and the team will may use a combination of Chris Crocker and Taylor Mays at nickel and safety.

Critical to Cincinnati's success will be the pass rush. During nine of Hoyer's attempted passes against the Vikings, only three were completed with one interception. According to Football Outsiders, Cleveland's pass protection is ranked No. 28 in the NFL with an adjusted sack rate of 9.4 percent, allowing 41 quarterback pressures, 18 hits on the quarterback and 14 sacks allowed -- tied for 30th in the NFL.

It always starts in the trenches.