Bengals vs. Browns: Confusion Lead To Failed Fourth Down Conversion

The Cincinnati Bengals had an opportunity, not only to score points, but to claim much needed momentum in the second quarter against the Browns. Instead, it was a disaster.

Share All sharing options for: Bengals vs. Browns: Confusion Lead To Failed Fourth Down Conversion

There's 4:34 remaining in the second quarter when the Bengals offense elected to go for it on fourth and one from the Browns seven-yard line, down by four points. It's agreeable for the Bengals to go for it. Considering that they were doing their best Walking Dead impression early against the Browns, Cincinnati needed to build confidence and a fourth down conversion would greatly help with that.

Cincinnati lines up with two tight ends (both on the right side of the field) and tight end Alex Smith at fullback. Alright. So you cut John Conner in favor of Orson Charles (who hasn't played an offensive snap since week one) and then decide NOT to bring in Domata Peko, who can level entire cities? Not that I have anything against Alex Smith, but couldn't that have been handled differently? 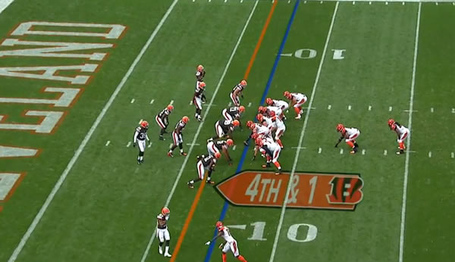 Convert this and sustain the possession, if not score a touchdown to take the lead.

Instead the Browns aggressively attacked the rushing lane when BenJarvus Green-Ellis took the handoff. Barkevious Mingo sacrificed himself by taking out Alex Smith in the backfield, forcing Green-Ellis to redirect inside. Whitworth initially showed pass protection and punched Desmond Bryant inside before his attention was transferred to Mingo while Clint Boling helped pancake linebacker Craig Robertson. 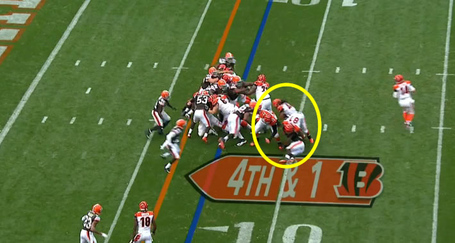 In fact, it's fairly evident that some offensive linemen were pass protecting while the others were drive blocking.

Confusion or not, this one is on Whitworth, who should have blocked down. But there was definitely an issue when Green-Ellis was dropped for a two-yard loss and the offense is forced to turn the football over on downs.

"It got real loud and we kind of had a play where we had a couple of options and it just seemed to be a lack of communication," Whitworth said via Bengals.com. "Half the people were thinking one play and half the other people... it was a cluster basically. We had an opportunity... a critical moment. A bad, embarrassing moment. Pull out or take a timeout and have a play that's easy to communicate."

Fair enough. Actually, that's concerning if those thoughts existed in the players' mind prior to the snap. But as a team captain, shouldn't Whitworth have taken that on his own shoulders?

"Everybody had to come down," Green-Ellis said via Bengals.com. "We've got to get to another play, hopefully get to a better play or take a timeout. They brought their guy in the A gap, which made the guard go down and made everyone come down a gap. They did a good job. We have to just do a better job getting ourselves into a better play and executing."

If Whitworth had stayed with his block on Bryant, who made the stop in the backfield, there is a lane that opens up; well, as much of a lane that a fourth and one conversion attempt allows. Instead the Bengals turn it over.