Bengals A.J. Green and Andy Dalton struggling to get on the same page

When Andy Dalton and A.J. Green are out of sync, bad things tend to happen for this Bengals offense -- which is what happened against the Cleveland Browns on Sunday.

Share All sharing options for: Bengals A.J. Green and Andy Dalton struggling to get on the same page

Alright, so it's not entirely unfathomable that A.J. Green is frustrated. Who isn't frustrated right now? I am. You are. The coaching staff is. The players are. In fact, anyone that isn't feeling frustrated after Cincinnati's 17-6 loss to the Cleveland Browns, doesn't belong here. Of course, this doesn't mean panic is setting in, nor does it invite self-righteousness from those countering legit criticisms. There are issues with this offense right now.

One of those problems is that Andy Dalton and A.J. Green are lacking synchronization.

"It’s not that we weren't on the same page, there’s just things like the way they were playing him, the way they were doing things that made us either go other places or take our chances that might not end up exactly how we want it," said Dalton after the game. "I've got to do a better job of giving him (Green) a chance to make plays. I think that’s what he is so good at, when the ball’s in the air making plays, when it’s him and one other guy or him and a couple guys. When it comes down to it, we have to be better."

With 14:39 remaining in the second, Dalton launched the football deep down the right sidelines from the Browns 37-yard line. Green, who had beaten the cornerback, ran a go-route. Since the football took its sweat time getting to Green, the all-star receiver was forced to slow while safety Tashaun Gipson tracked the football like a center fielder eyeing a routine fly ball. 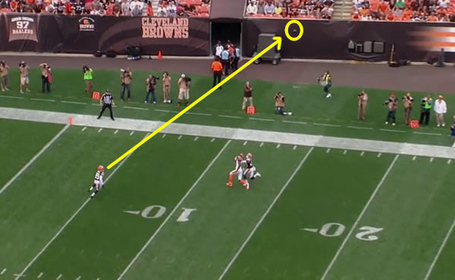 Nearly picked off. With 2:21 remaining in the second quarter, Green from the slot, goes vertical and Dalton overthrew his receiver on third and four from the Browns 45-yard line.

Fast forward to the 8:50 mark in the third quarter when the Bengals have third and seven from their own 16-yard line. Green had beaten Buster Skrine (easily) on a slant route without much interference in the pattern. Leading Green on a floater over D'Qwell Jackson should have led to a significant gain. 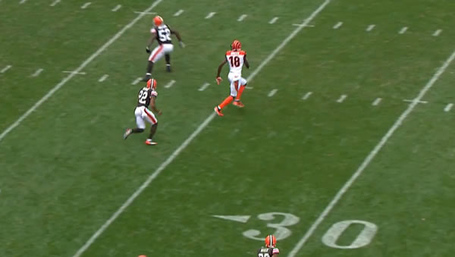 However, the football is badly thrown behind Green. 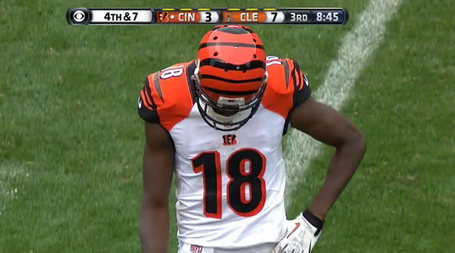 At the 2:04 mark in the third quarter from Cleveland's 32-yard line on first down, A.J. Green runs a "go" route while Dalton threw an out/curl pattern (or at the very least his back shoulder)

Green removed himself from the game at that point.

"I want to be fresh every play," Green said via Bengals.com. "I ran a 'go' ball, got a little tired and came back the next snap."

Not that a player like Green isn't allowed some rest, but who actually buys that excuse from a receiver that generally runs all but one (maybe two) offensive snaps during any given game (and the times that he's out, the Bengals are running a jumbo package on goalline situations).

In truth, Green's overall production in the first four weeks is similar to last season with one exception -- average yards per reception.

After scoring twice on nine receptions and 162 yards receiving against the Chicago Bears, Green is averaging just under six catches, 46 yards receiving throughout the last three games with one just total touchdown.

Green accepted equal share after the game, but clearly the two are not on the same page at times.

"Sometimes we are, sometimes not," Green said via Bengals.com.

The high-percentage short throws, such as a quick slant or a short in-out route and those connections are being made.

"But we've got to get back to a consistent basis on some of those deep balls when it's there," said Green. "My part. His part. We have to put more work in. It's there. You saw the play when I was in the slot. The plays are there. We just have to go back with me digging more and him putting it in a better spot. Both of us."