When you consider the most basic examples on how teams succeed in the NFL, identifying third down production would be a good start.

Share All sharing options for: Third down production ate the Cincinnati Bengals alive

However, based on the team's extreme reliance on the defense's overall production, their failure to produce on third down weighs heavier on the Bengals overall successes than the offense. Consider that the Chicago Bears converted nearly 43 percent of their third down opportunities, including three of the final five when the Bears took a 24-21 lead (and eventual win) midway through the fourth quarter. It was a similar story against the Browns, except let's replace one half (like against the Bears) for the entire game in Cleveland, converting half (9/18, 50 percent) of their third down opportunities.

"Third down killed us," said defensive tackle Domata Peko. "And we didn't get a turnover. We have to get better at that. Hoyer was getting the ball out because he knew we were going to rush him."

Cleveland has third and one from the Browns 14-yard line with 7:29 remaining in the first. Chris Ogbonnaya gets the call for a power run off the edge; a fairly simple game of man-vs-man -- reality television at its finest. Joe Thomas flipped Michael Johnson inside. Vontaze Burfict couldn't get off the block and Taylor Mays was sealed out; the lane parted. 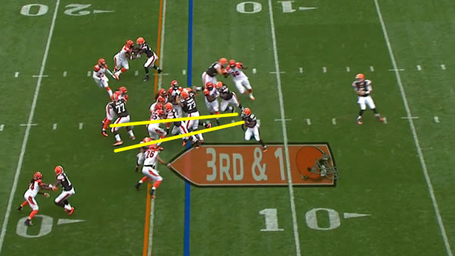 Later during the same possession, with 3:32 remaining in the first, the Browns have third and six from Cincinnati's 18-yard line. Brian Hoyer takes the shotgun snap and targets Davone Bess' slant. As Bess breaks into his route, Ghee lost his balance which gave the receiver (with a Christmas postcard) the advantage and eventual separation.

One play later, the Cleveland Browns open the scoring with a Jordan Cameron touchdown over Taylor Mays. Two successful third down conversions for Cleveland leads to an opportunity to score. This was the theme for Cincinnati's defense on Sunday.

Let's not characterize the Bengals with a poor performance... technically. Cincinnati held Cleveland to a 4.7 yard/play average; their best this year. There were at least 24 plays that were identified as failures for the opposing offense, per Pro Football Focus. And the pass rush was decent with 10 hurries, three hits and multiple sacks. Yet, for some reason Hoyer completed 10 of his 13 third down passes for 108 yards passing; stepping up when it matters defines teams.

At the 8:29 mark in the first, the down (third) and distance (14) favors Cincinnati on a possession that nibbled Cincinnati's 40-yard line. Hold the Browns outside of the first down marker, force them to punt; it's as simple as that. Instead wide receiver Josh Gordon found a significant gap in zone coverage with Brandon Ghee, Vontaze Burfict, Taylor Mays, and Adam Jones unable to compress.

Gordon picks up 16 yards and the first down. These are the type of third down plays that Mike Zimmer's feared defense shouldn't be allowing. And how does Jordan Cameron's 15-yard gain by on third and four with 1:08 remaining in the second quarter happen? 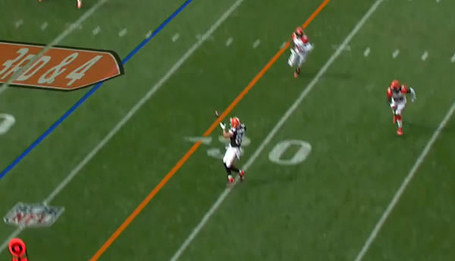 Cameron, one of Hoyer's most consistent targets, finds ways to get open while the defense scratches their collective head giving Cleveland the sidelines during a two-minute offense. Look at that space. Cameron added another 11-yard reception over the middle with over 30 seconds remaining. Vontaze Burfict and George Iloka helped Cleveland by adding another five yards taking their time to remove themselves from the pile, earning a delay of game.

We just allowed too many third-down conversions defensively and too few we didn't convert enough on offense. - Head coach Marvin Lewis

Hoyer nailed Gordon on a quick slant with 6:56 in the third with Terence Newman trailing, picking up nine yards on third and seven to Cincinnati's 20-yard line. How is that passing lane wide open? Cornerbacks aren't going to shut down receivers, but schemes should make those passing lanes more difficult. Thankfully, a massive James Harrison stop and a quarterback sack split between Geno Atkins and Carlos Dunlap, the Browns were unable to convert on third and 23. Billy Cundiff nailed the 51-yard attempt anyway to give Cleveland a 10-3 lead. The Browns were only faced with one third down situation on their 91-yard touchdown drive in the fourth; an easy Chris Ogbonnaya two-yard gain to convert the third and one.

Cincinnati's offense, on the other hand, couldn't replicate Cleveland's third down production, converting only four of 14 on third downs -- by far their worst output yet this season.

"When you have ‘third down and longs’ it’s hard and you can’t expect a lot out of those," said Bengals offensive tackle Andrew Whitworth. "It was just a bad offensive day and it’s embarrassing."

There is truth to Whitworth's wisdom. Dan Hoard talked about the team's inability to gain ground on first down, leaving frustrating situations where the Bengals have to cover a lot of ground to convert.

Against the Browns, the Bengals gained 99 yards on 25 first down plays – an average of 3.96 per play. Take away a 29-yard-pass to Tyler Eifert and that average drops to 2.92 per play. Through four weeks, Jacksonville and Tampa Bay are the only teams in the NFL averaging fewer than four yards on first down plays. It’s no coincidence that they are a combined 0-and-8.

Sometimes the Bengals converted. Dalton unleashed a fastball over the middle to a wide open Jermaine Gresham with 12:12 remaining in the first quarter, converting a third and ten on a 26-yard reception to Cincinnati's 44-yard line. Yet the Bengals are unable to sustain the drive after a failing on a third and three from the Browns 39-yard line during the same possession. Problem? The architect that assigns Giovani Bernard on Paul Kruger, who impacted Dalton in mid-throw. 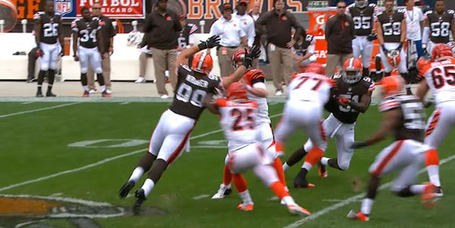 Cincinnati converted the first third down on their second possession of the game after Desmond Bryant was flagged for illegal hands to the face. Sanu picked up seven yards on third and five with a variation of the bubble screen with A.J. Green and Marvin Jones blocking (Jermaine Gresham was split out wide right). 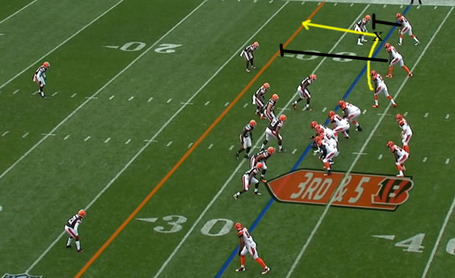 With over 11 minutes remaining in the third quarter, Cleveland overloaded a blitz to one side, outnumbering blockers 2-1. Chris Owens knocked the football out of Dalton's hand (he argued for an incomplete pass) and recovered the third down fumble.

Cincinnati faced third and sevens on their next two possessions, failing to convert both; Dalton threw a poor pass on the following possession to force a three and out and A.J. Green was inches short on his six-yard reception with 2:45 in the third. Andy Dalton's quarterback sneak picked up the first down.

Unfortunately it was the same chorus for the entire game; and when they did do the impossible, they shot themselves twice over. Third and 13 with 13:25 remaining, Dalton finds Jermaine Gresham over the middle for a 24-yard gain to the Browns 41-yard line. On the next play, Dalton and Kyle Cook botched the traditional snap exchange and Cincinnati is eventually faced with a third and 24.

In a way, it's not surprising. Sunday was the fifth straight game in which the Browns offense converted 40 percent of their third down opportunities. And when the Bengals allowed the opposing offense to convert over 40 percent last year, Cincinnati's record was 1-4. That's not a coincidence. That's a disturbing trend.