Geno Atkins doubtful but not out against the Arizona Cardinals

Cincinnati Bengals defensive tackle Geno Atkins is climbing a difficult road recovering from an ACL tear. He's still scheduled for an opening day return, but may play this preseason.

Share All sharing options for: Geno Atkins doubtful but not out against the Arizona Cardinals

What's the story on Geno Atkins?

Despite head coach Marvin Lewis remarking on the possibility, don't bet the house that he'll play this Sunday against the Arizona Cardinals... 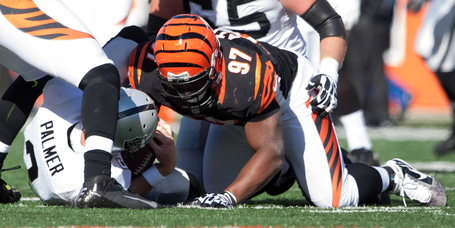 (hey, how did that get in there)

...but the plan for him to play in the team's regular season opener. ESPN beat writer Coley Harvey conjectures that Atkins may get some snaps in against the Indianapolis Colts.

Guess that's to say I'm pessimistic for now that we see Geno Atkins Sunday, but I wouldn't be surprised if he suited up once before season

As is usually the case with these type of injuries, after Atkins suffered his ACL tear against the Miami Dolphins last year, it left a devastating shoulder-shrug on his ETR. In February, someone said that he's on pace for training camp at "some point". Those expectations were significantly dialed back in May when ESPN's Coley Harvey saying that it was "anyone's guess" as to whether Atkins would be ready for the regular season. Maybe that's more of an existential remark. He'll be "ready" physically, but the mental hurdle is... yesh. But isn't that sooo Cincinnati? Reward a player with a big contract, only to frustratingly watch him become a durability issue (See: Votto, Joey).

Atkins has been doing work in training camp and thus our question has evolved: We know that physically he's close, if not all the way back. Where he is mentally (aka, confidence in that knee) remains unknown.