Bengals at Chargers will be a test for both teams

The San Diego Chargers are trying to rise above the other wild card potentials to claim a postseason berth while the Bengals are looking to settle any lingering disputes about who will win the AFC North.

Share All sharing options for: Bengals at Chargers will be a test for both teams

With the Cincinnati Bengals taking a 20-13 lead following an offense that finally awoke from their slumber and a defense that forced their first turnover of the game, the San Diego Chargers only need a touchdown to tie the game with an expiring clock and two timeouts. Following a 14-yard completion to Ronnie Brown, consecutive incomplete passes and a 17-yard reception to Danario Alexander, the game reaches the Two Minute warning while the Chargers began threatening from the 49-yard line.

That was the opening paragraph during our postgame reaction to Cincinnati's eventual 20-13 win over the San Diego Chargers last season. Adam Jones was called for defensive holding on the following playing and Philip Rivers completed a pair of passes to Danario Alexander and Malcolm Floyd for a combined 27 yards, reaching the Bengals 17-yard with 1:11 remaining in the game. Plenty of time on the clock, with two timeouts sitting in San Diego's pocket, this felt like a game that Cincinnati was destined to lose.

Rivers steps into the pocket to avoid the parameter pass rush from Carlos Dunlap and Michael Johnson on first down. Rivers finds Malcolm Floyd's fade towards the front left pylon. Despite Chris Crocker trailing the route, the pass fell inches short. Incomplete. Defensive coordinator Mike Zimmer dialed up an all-out blitz, bringing seven defenders and forcing Rivers to throw off his back foot. With Leon Hall disrupting Alexander's route, Rivers threw the football outside of arm's reach. Incomplete. On third down, Robert Geathers looped around Carlos Dunlap and forced another errant throw, well outside of Brown's reach -- if he caught the football, he would have been out of bounds by five yards.

Fourth down. San Diego calls a timeout. Would Zimmer blitz the house or drop everyone into coverage? Terence Newman played Floyd physical off the line of scrimmage and when Rivers tried to lead his receiver down the right sidelines, center fielder Reggie Nelson read the desperation throw and intercepted the football, sealing Cincinnati's win with 50 seconds remaining in the game. 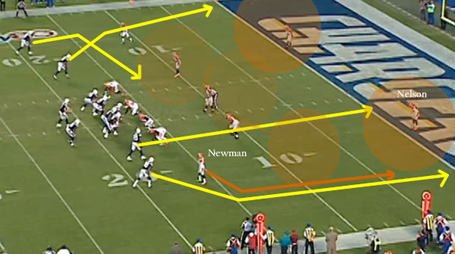 Tied with Peyton Manning and Ben Roethlisberger, Rivers leads the NFL with most 20-yard completions (47) and second with 172 passes resulting in a first down. The weapons he's surrounded with have been brilliant, such as rookie wide receiver Keenan Allen, who leads all NFL rookies with 50 receptions and 737 yards receiving. Receiver Eddie Royal has a career-best seven touchdowns already and free agent pickup Danny Woodhead has also set career marks in receptions (59), yards receiving (469) and touchdown receptions (50) -- all of which are most by a running back this year.

Yet, we're talking about Cincinnati's defense. Mike Zimmer's crew, a mad scientist display of confusion, bloody lips and creative coverage to hide some of the issues in the secondary (aka, make you worry about the pass rush). Cincinnati has already beaten Tom Brady, Aaron Rodgers, Matthew Stafford and Ben Roethlisberger this year, and placed Rivers in their deep pocket of defeat last year as described above.

When Rivers takes to the field, he'll be facing one of his toughest tests against a defense that currently holds the league's sixth-best passing defense (211.1 yards/game) and have frustrated opposing quarterbacks to a passer rating of 74.0 (only the San Francisco 49ers and Seattle Seahawks have secured lower passing scores). They've limited opposing quarterbacks to only 28 passes beyond 20 yards (fifth in the NFL) and their 34 quarterback sacks is three off the league leaders (tied by five different teams).

Sunday's game will be a test of tests. San Diego is coming off an emotional victory resulting from a last-second touchdown to secure a win over Kansas City. Cincinnati is exiting their bye week with a rising Pittsburgh Steelers squad that's suddenly on their heals. This will be the battle of the game.

The wild card? Andy Dalton of course, facing a passing defense that's 27th in the NFL with only six interceptions (t-27th in the league) and an opposing quarterback rating of 102.7 (31st in the NFL). It's a perfect storm for Dalton to sing his redemption song.