Interested in watching the Bengals play in virtual tropic-weather compared to the hypothermia that we're dealing with in the Queen City? We'll let you know if you'll be able to.

Damn you, Cincinnati Bengals for scheduling a game in southern California which appears to be the only region in the United States untouched by the arctic blast that's dropping the country's temperatures into the teens. At least when the Bengals kickoff at 4:25 p.m., we'll see how nice the weather is in sunny San Diego. In fact, the entire state of Ohio still see it, along with the extreme northwest section of Pennsylvania, extreme southeast section of Indiana and most of West Virginia and Kentucky. 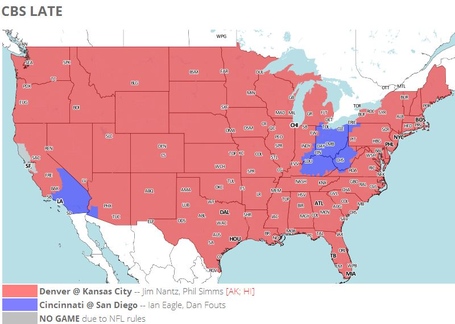 If you're in the Cincinnati region, this won't be the only game on television (of course). CBS has honored us with the Jacksonville Jaguars and Cleveland Browns during their early game. FOX has the single-header, showing the Arizona Cardinals and Philadelphia Eagles at 1 p.m.

While the Bengals are playing in the late afternoon, the entire nation (save for Bengals and Chargers regions) will have the Denver Broncos at Kansas City Chiefs. Note: The Chargers game isn't actually sold out yet, so Ohio and the surrounding states might be the only one's getting the game.