Bengals vs. Chargers: First game locally blacked out in the NFL

There are over 5,000 tickets remaining in Cincinnati's game against the Chargers, failing to sellout by the deadline and forcing a black out in San Diego.

Share All sharing options for: Bengals vs. Chargers: First game locally blacked out in the NFL

The NFL's blackout policy has been a nuisance that's affected Cincinnati for years. After a relatively quiet period for a six-year stretch from 2004, the policy and the degradation of the on-field product has threatened several black outs since 2010. Cincinnati lost an ocean of season ticket holders after the 2010 Bengals finished 4-12, compounded by Carson Palmer's trade demand and the NFL lockout. The affect remains felt today as Cincinnati is forced to push more tickets on a per game basis (why do you think they're doing Orange and Black Friday?)

Though there wasn't a chance that the Bengals game against the Chargers would be blacked out in Cincinnati, apparently the matchup wasn't good enough to sell out in San Diego.

Sunday's game between the San Diego Chargers and Cincinnati Bengals will be the first game blacked out on local television this year. More than 5,300 tickets remain, according the San Diego Union-Tribune.

Cincinnati won't be impacted at all, but Bengals fans in the region will be. Everyone in Ohio and parts of West Virginia, Kentucky, Indiana and Pennsylvania will see the game (small portions of southeast California and Arizona will also). But the significant portion of southern California (namely San Diego, Los Angeles and Palm Springs) that was originally scheduled to broadcast it, have now been switched out to the national game between the Kansas City Chiefs and Denver Broncos. 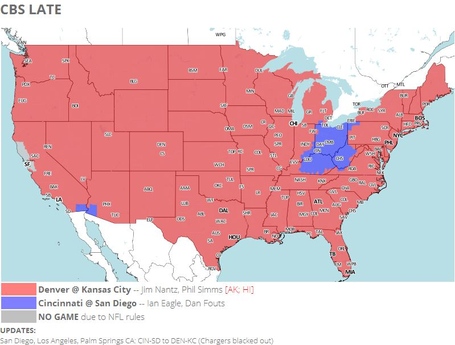