Bengals offensive line powers the rushing offense against the Chargers

The Cincinnati Bengals went back to some old school football, pounding San Diego's defense and preventing their offense from having an opportunity to tie the game.

Share All sharing options for: Bengals offensive line powers the rushing offense against the Chargers

How good was the offensive line on Sunday during Cincinnati's 17-10 win over the San Diego Chargers? Looking to pound the football against the Chargers 17th ranked rushing defense, the Bengals generated 164 yards rushing, one yard shy of the team-high 165 yards against the Buffalo Bills in mid-October. Their 4.3 yard/rush average was also second their performance against the Miami Dolphins, where the running game generated 163 yards on a 4.7 yard/rush average.

Yet it wasn't the original configuration in the Bengals old school performance against the Chargers. Cincinnati opened the game replacing Andre Smith with Collins as the starting right tackle. The team has yet to explain the reason for (essentially) benching Smith, but we have our guesses -- it's either performance-based (hasn't played well in the last three weeks) or disciplinary.

Ironically, the Bengals actually found their rhythm when Clint Boling suffered what appears to be a season-ending injury and the offensive line was reconfigured again. Smith entered the game with 3:29 remaining in the first quarter to his customary right tackle spot, moving Anthony Collins to left tackle and Andrew Whitworth to left guard. Cincinnati would run on five of their next eight plays after Boling left, generating 43 yards rushing and scoring a four-yard touchdown to take a 7-0 lead on the first play of the second quarter.

The play Cincinnati that was most often used was the familiar "Power O", with Kyle Cook and Mike Pollak doubling down, Andre Smith navigating to the second level, Jermaine Gresham kicking out and Whitworth, pulling from left to right, looping around and wiping out the first linebacker that he crosses. The design of the play at the 2:56 mark in the first quarter was even more impressive when you note that Marvin Jones and Andrew Hawkins showed a bubble screen, holding the backside of the defense. 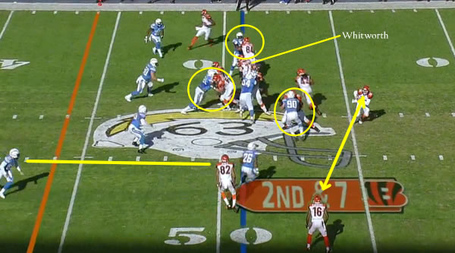 Whitworth wiped out Manti Te'o while the nimble Andre Smith zeroed in on linebacker Donald Butler. Gresham is still holding his block, as are Cook and Mike Pollak, and by the time San Diego reached BenJarvus Green-Ellis, the Bengals picked up 13 yards and the first down at San Diego's 38-yard line.

With Boling suffering a "significant" knee injury, it would make sense that the Bengals keep using the chemistry from that lineup against the Chargers. Keep Anthony Collins at left tackle and Andrew Whitworth at left guard, Andre Smith at right tackle and wait for Kevin Zeitler, currently dealing with a foot injury, to return at right guard.

Whitworth recognizes the need for Cincinnati's running game to generate momentum, mostly as a means to help the passing offense.

"There’s no question, you see it every year," said Whitworth via the Enquirer. "You read a lot about some of the big throws that are made in the playoffs but you really go back and look at most of the drives it is 4-5 yard carries that puts the offense in great position to throw the ball. If you can keep the offense in great position you have an opportunity to throw. When it comes down to games on the line late in the season you have to run it effectively."

Once the run was established, quarterback Andy Dalton found success, going nine of 13 in the second half for 149 yards passing, a touchdown and a passer rating of 133.2. By our count, Dalton has gone 65 consecutive drop backs without being sacked, which includes nine straight quarters (including the overtime loss in Baltimore). The last time he was sacked was the 21 second mark in the fourth against Baltimore.  Additionally, according to the NFL, Dalton wasn't even hit while in the pocket against the Chargers.

The rushing effort was at its most effective in the fourth quarter. After Nick Novak converted a 48-yard field goal to reduce San Diego's deficit to within a touchdown, Cincinnati surprised everyone with a 28-yarder to A.J. Green on a go-route down the right sidelines. After that, Cincinnati ran the football eight times (and two knees) for 35 yards while wiping out over four minutes on the clock, preventing the Chargers from having an opportunity to tie the game.

BenJarvus Green-Ellis willed himself to convert a third and two with 3:08 remaining and a game-winning five-yard run that converted a third and four from San Diego's eight-yard line that psyched up the offensive line for their efforts. The Bengals took two knees from victory formation and sealed the 17-10 win.

"We all were. I felt like offensively we played with a lot of emotion. There are a couple plays we would like back but the emotion was good. If we can bottle that up and keep it for this stretch we’ll have the chance to be good."

Cincinnati might want to continue running the football based on their remaining schedule, even using the configuration that they applied against San Diego. Their next three opponents are ranked 28th (Colts), 18th (Steelers) and 23rd (Vikings) against the run, allowing an average 121.4 yards rushing per game with 36 combined rushing touchdowns allowed. Baltimore is ranked sixth with 100.1 yards rushing allowed and two touchdowns, tops in the NFL.