The Weekend In San Diego: Part One, Saturday

Cincy Jungle's Anthony Cosenza spent last weekend in San Diego for the Chargers/Bengals game. We share his interesting stories and pictures from the weekend, starting on Saturday when he and his family stayed at the same hotel as the team.

Share All sharing options for: The Weekend In San Diego: Part One, Saturday

It's a funny thing working for this website--I try to keep my professionalism and remain unbiased when writing Bengals stories, but deep down, I'm a huge Bengals fan. All of us that work for CJ are and that is what makes this opportunity to work for this site awesome: the inner fan inside of all of us is embraced.

This past weekend I had the opportunity to head down to San Diego and watch the Bengals play against the Chargers. Most Bengals fans live within driving distance to watch the team play eight home games and/or attend Training Camp for a meet-and-greet if they so chose to. I don't have that opportunity and/or luxury, so when it comes around I have to leap at the chance. It's a rarity that the team plays two consecutive years in San Diego, so for the second straight year I made the jaunt.

Though I had a great time last season, this year was over the top for a variety of reasons. Topping the list is that I got to spend the weekend with a chunk of my immediate family members. What also made this trip particularly special was that we stayed at the same hotel as the Bengals team this time around. We thought we had that dialed in last year, but found out otherwise. We weren't going to miss that opportunity this year.

I'm going to take some time (over two posts) to share my experiences, photos and stories from the weekend. Some are pretty humorous, so I hope that you enjoy what I wanted to show and tell you all.

My brother, sister-in-law and I all arrived in San Diego from Orange County at around 1PM after an hour drive south. My wife would join later and the rest of our family and friends would arrive on gameday morning for our tailgate. We were unsure if this was the actually hotel that the team was staying at, but our fears quickly vanished. Upon entering the main courtyard of the hotel we saw a number of Bengals players walking around with their friends and families. Stoked!

We shot out of the car and into the lobby and I soon realized that I didn't have anything for anybody to autograph. I was wearing my white Cincy Jungle shirt and decided that that would be a great piece of memorabilia for signatures. Unfortunately, since it was lunch time, players and team members were sparse and/or on their way out to check out the area outside of the hotel, so we went down to the Pacific Beach area for a little lunch of our own. When we came back to the hotel, team players and members were everywhere and mostly accessible.

The Meet And Greet:

Though I met and received an autograph from linebacker Michael Boley before we ate lunch, he was the only Bengals member that I met early on. When we returned, it was difficult not to be able to meet someone that we knew was associated with the Bengals in some fashion. Initially it was players, then we ran into coaches, fellow media members and even some former Chargers greats, such as Hall of Fame quarterback Dan Fouts.

The first players we met were linebacker J.K. Shaffer, offensive lineman Mike Pollak, defensive back Chris Lewis-Harris and others. As the afternoon wore on, I was also privileged to meet defensive ends Carlos Dunlap and Michael Johnson, offensive tackles Andre Smith and Andrew Whitworth  We hung around the lobby for a few hours and most the players were cordial, given the fact that they were being hounded for autographs and small talk.

The elevators were a great way to meet other players, mostly by chance and accident and I received a few more signatures that way. I was pleased to meet Marvin Jones and he was an extremely nice guy. We talked about being fellow Southern California natives and he dug on that while adding his name to my shirt of signatures. Devon Still and Vincent Rey were two other guys I spoke to a bit on the elevators and I was stoked on their pleasantry as well. Adam Jones even got a kick out of signing my brother's Bengals beer coozy, while it had a full beer residing in it.

I'm no small guy at 6'2" and 235 pounds, but some of these guys were just enormous and puts into perspective what kind of size and talent goes into playing NFL football. You can see that by the pictures below. 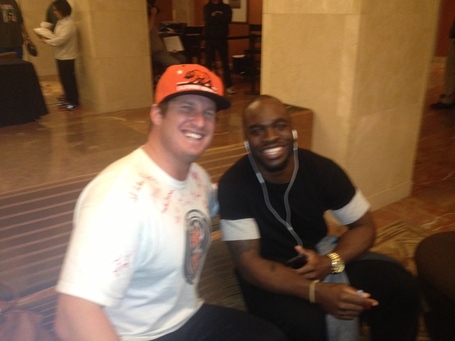 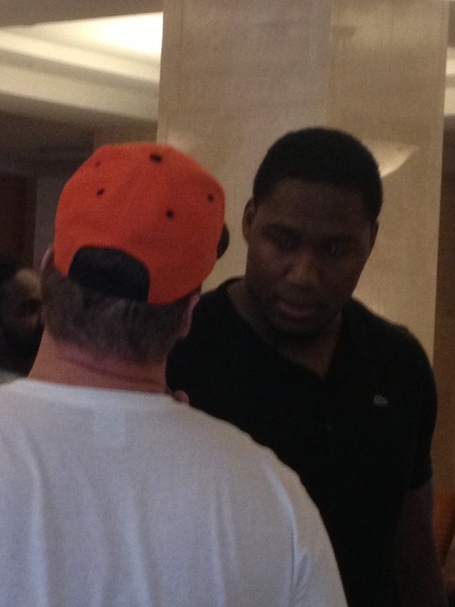 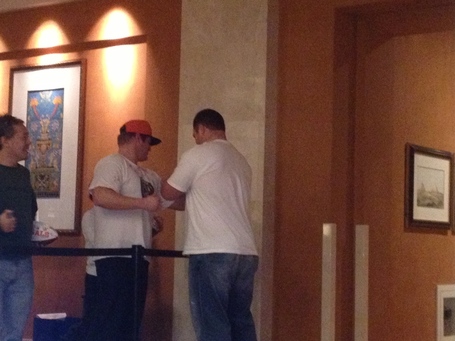 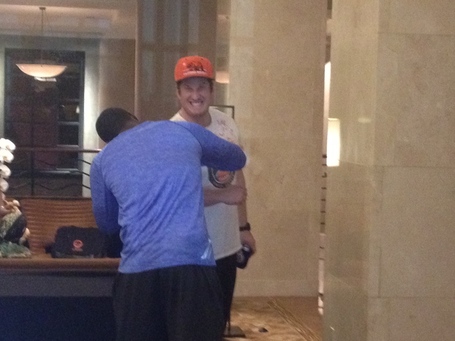 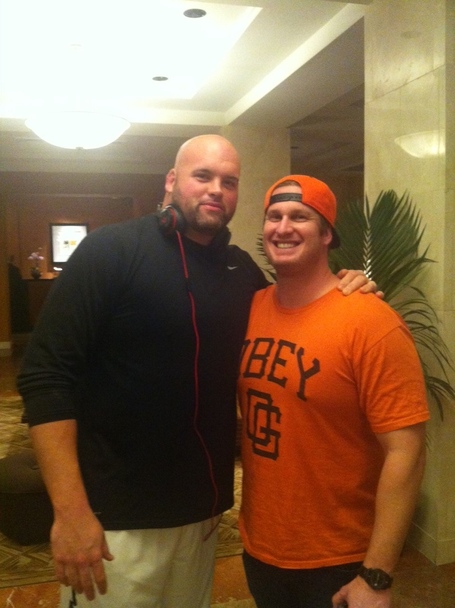 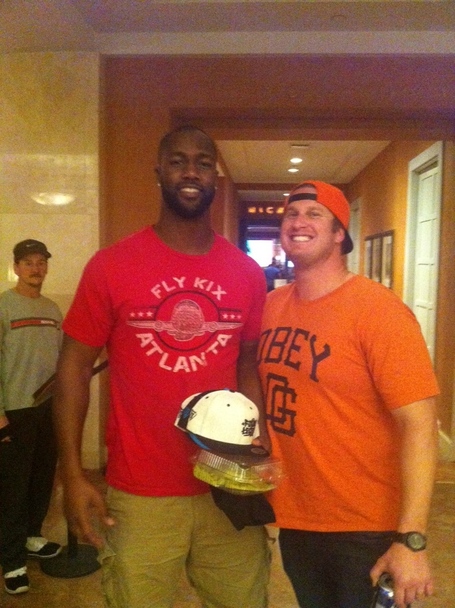 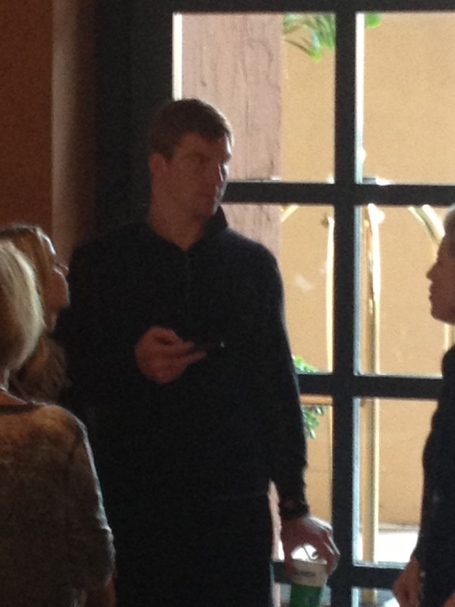 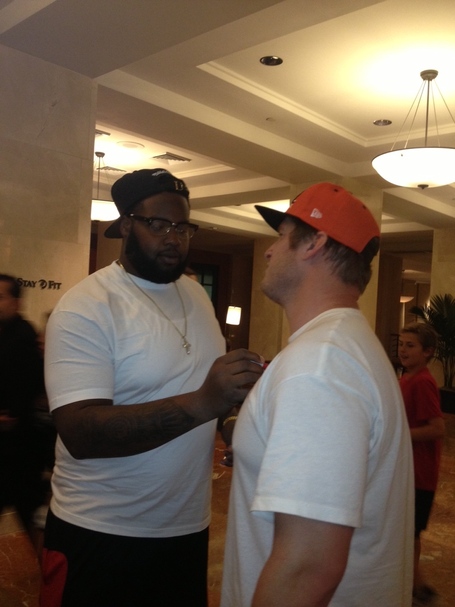 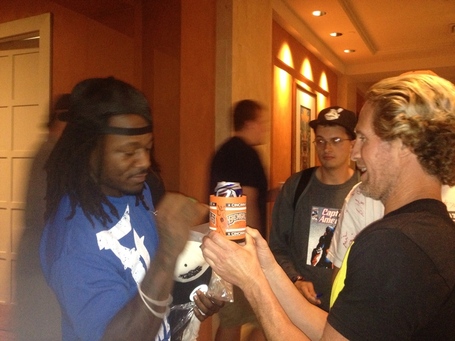 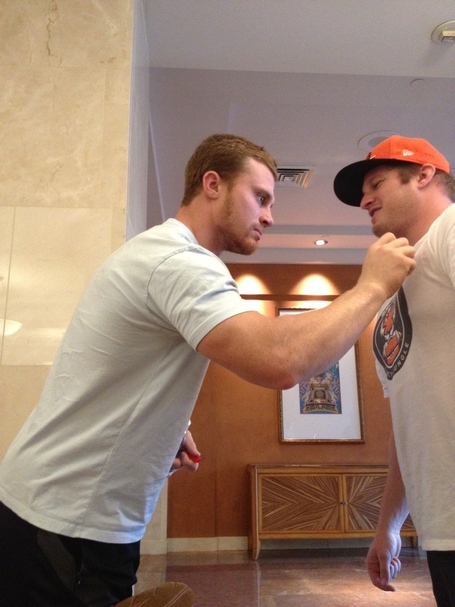 +One of the people that I met, and which really became one of the highlights of the trip, was Bengals owner/general manager, Mike Brown. For a man worth a pile of money and one that runs an NFL franchise, I was awestruck in how nice and approachable the man was. As I shook his hand and asked if he would sign my shirt, we had a really interesting exchange in our mini-conversation: 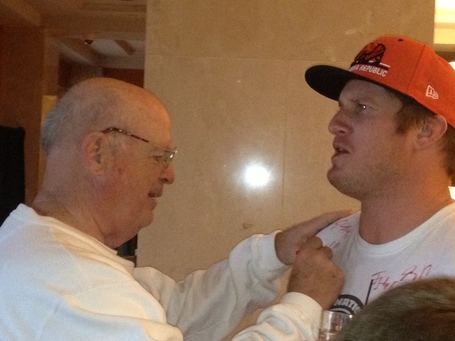 "Do you lift weights?", Mr. Brown asked me. I laughed, responded that I do and ask him why he asked me that. He said "I can tell--you're husky". After I laughed at his description of me, I told him "you've done a great job of late, sir." He responds with a "well, 'of late' is the key term, isn't it?". It was a great exchange and I was very appreciative of Mr. Brown's personality in that brief period.

+Rewinding back to Lewis-Harris, the guy sat next to my brother and I on the couch that we are pictured in for about a half an hour. He appeared to be speaking with a family member or significant other, so we left him alone. I don't know how exactly the conversation started, but we said we knew who he was and just didn't want to bug him while on the phone with his family. He said with a smile "oh, I was just pretty sure that nobody recognized me", as he watched his teammates get approached. We laughed and he was great about conversing with us, taking a picture, etc.

+I also met many of the teams coaches. Both Jay Gruden and Mike Zimmer signed my shirt and both were really nice about it. When I met Zimmer, I admittedly had a few adult beverages and asked him to sign my bicep on my shirt and flexed while we were both waiting for the elevator. He just laughed and signed it while I told him that he had done a great job with the defensive unit.

As he was signing my flexed arm, the elevator door opened and a group of defensive players were in it. They saw what Coach Zimmer was doing and gave him a really hard time about signing another guy's bicep. He laughed but also jokingly told his guys to shut up as he got in the elevator. I'm sure he got an earful on that ride up.

Around that time, I went downstairs to get a round of drinks. As I came back up from the bar, Marvin Lewis had made his way through the lobby and ended up taking a picture with my sister-in-law. I was jealous that I missed that opportunity, but she got a good shot with him. 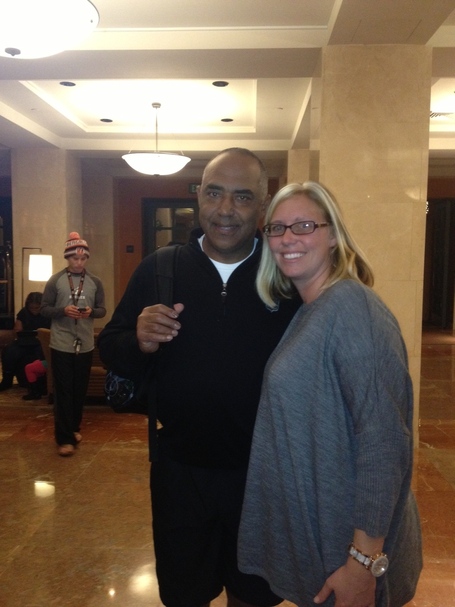 +As I said earlier, my wife arrived that evening to the hotel, shortly before dinner time. When she got there, we rode the elevator up to meet up with everyone for dinner and the elevator got crowded with some huge dudes. Brandon Thompson, Dre Kirkpatrick, Vontaze Burfict and about three others came in the elevator at the same time. My brother, my wife and I all shared a wide-eyed look that was a universal one for "holy &*$%, these guys are massive".

+Very cool tidbit from Michael Johnson and BenJarvus Green-Ellis. My brother and sister-in-law have a little boy who is just starting to get into football and the Bengals. Kellen, my nephew, gave a stack of some trading cards to get signed in the event that we saw some players. Not only did both of these guys oblige in that regard, but both also did a little "face-time" session with him when he was on the phone with his parents and they introduced him via mobile. Both guys talked to my nephew and it made his night.

Aside from the many memories of the day, I collected about 25 total signatures on the CJ shirt. I was very impressed with the friendly nature of the team, including the coaches and owner. However, this was only the first part of the weekend, as the team still had to play a game. 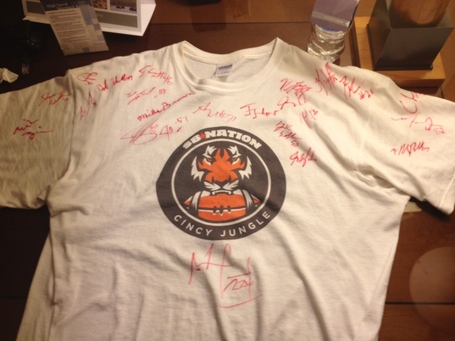