Anthony Cosenza from Cincy Jungle concludes his memories from his weekend in San Diego with the stories and pictures from the actual game.

Share All sharing options for: The Weekend In San Diego: Part Two, Gameday

By now, you've found out that I had a pretty sweet start to my trip in San Diego for the Bengals/Chargers game. The handful of hours that I spent at my hotel in the afternoon and evening on Saturday was just epic. Even so, the main reason for our trip, the actual football game, had yet to commence. Knowing that we were going to be getting up early, we hit the hay at a relatively reasonable hour and let visions of the Bengals beating the Bolts dance through our heads.

My brother and I have a ritual when we watch Bengals games, where we run and work out for a couple of hours before we settle in and gorge on food and drink all day. It's really just a way for us to not feel so guilty for sitting around and watching football for most of Sunday. We continued our tradition a bit this past Sunday with a 7AM workout session.

When we walked in the gym, Player Personnel man Duke Tobin was hitting it hard (a stark contrast to his predecessor, Jim Lippincott) and we also saw head trainer Chip Morton getting some work in. A little ways into our workout, former Bengals offensive lineman and current radio color analyst Dave Lapham walked in and did some cardio. We didn't bother them, but it was still a cool feeling being surrounded by team staff members during our morning workout.

After we finished we went to and from the lobby a couple of times between getting ready and packing up our cars. We hung around here intentionally to see if we would encounter any other players that we may have missed the night before and we saw a few. Clint Boling, Rey Maualuga, Kevin Zeitler and James Harrison all shot through the lobby, though we didn't approach any of them. On my final ride down the elevator I greeted defensive backs coach Mark Carrier and wished him luck in the game.

We arrived shortly after the 9:25AM PST opening of the gates and started setting up our stuff to cook and hang out before the game. We began greeting the rest of our party members that arrived that morning and had some fun (side props to a few people: my sister who battled a foot injury, but champed through the day, my brother-in-law who came to the game despite being a diehard Raiders fan and the same for my friend who is a 49ers guy). I was impressed with the classiness of the Chargers fans, as very few gave us a hard time and none of them gave us problems before or during the game. The weather was warm and beautiful and didn't drop below 70 degrees before, during o

As we had hoped, we met some local Cincinnati guys that were in the midst of an epic trip themselves. They came out from Cincinnati for the game and were then headed to Las Vegas afterwards. They were great guys and it was awesome getting to know some good ol' folks from Ohio. 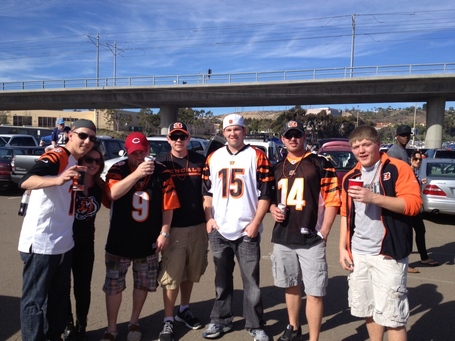 My family, friends and I continued to tailgate until shortly before kickoff. We enjoyed meeting new people and soaked in some sun before we hit the stadium and our epic seats. 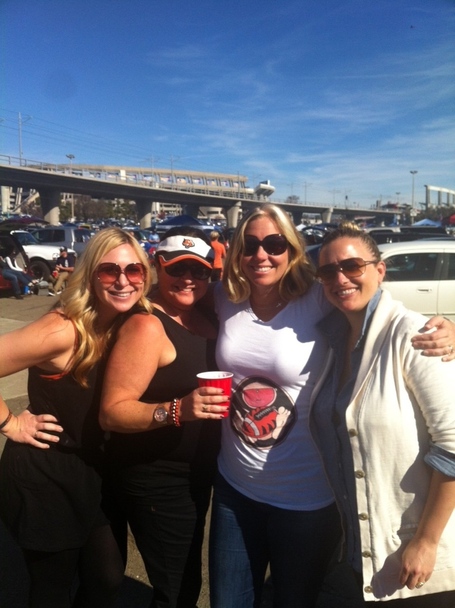 The Game And Our View:

We had purchased some solid seats last year, so i knew where to buy them this year. We were field level, row one, at about the 40-yard line on the Bengals side. The seats were so awesome and we even were on the CBS telecast at one point because the cameras were so close (check the video clip here). The atmosphere was pretty raucous too, as the Chargers fans made quite a bit of noise throughout the game.

The sun was shining in our faces, but went down about midway through and we enjoyed every minute of it. And, yes, I wore a goofball hat again this year, much like last year's getup. 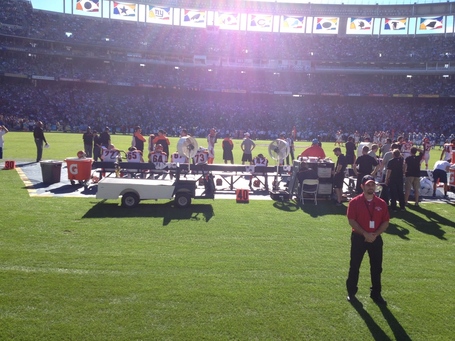 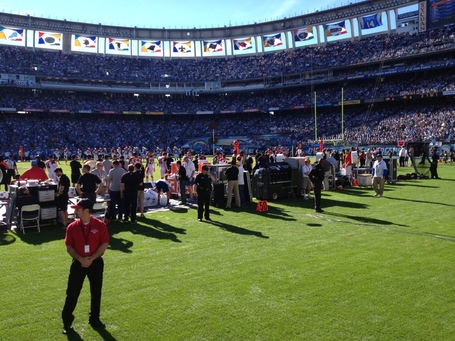 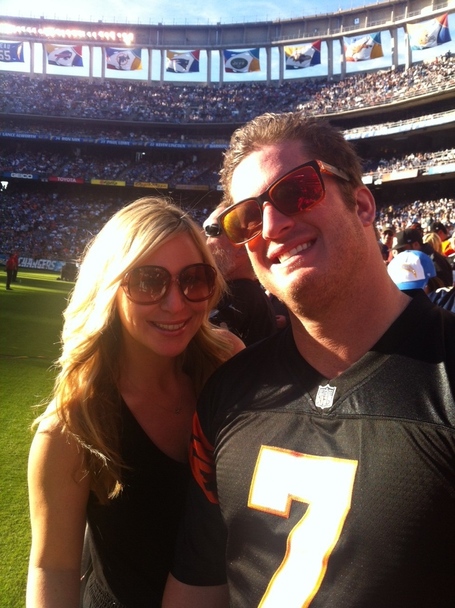 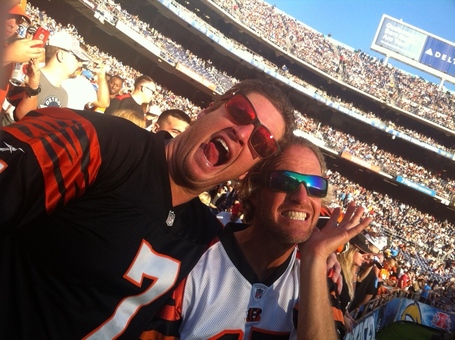 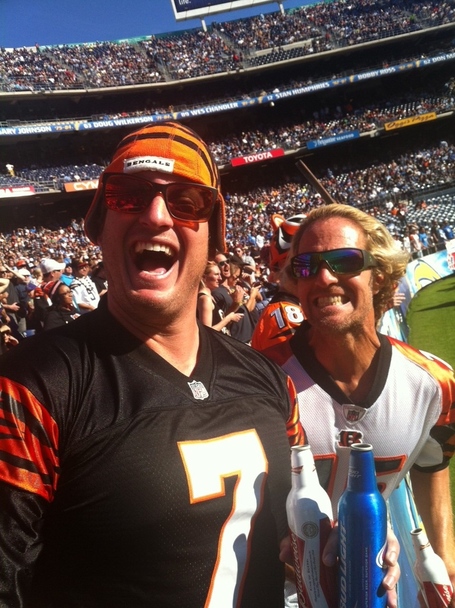 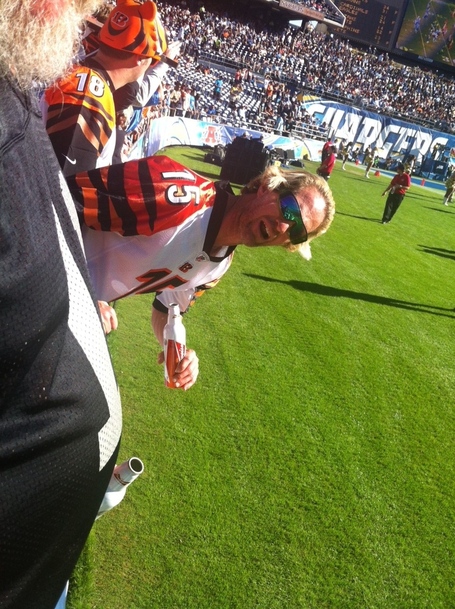 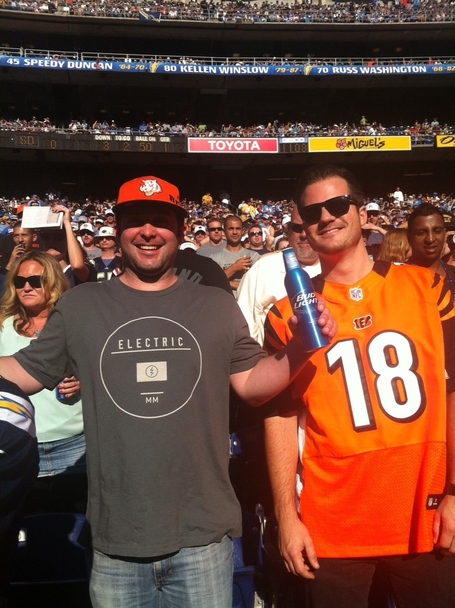 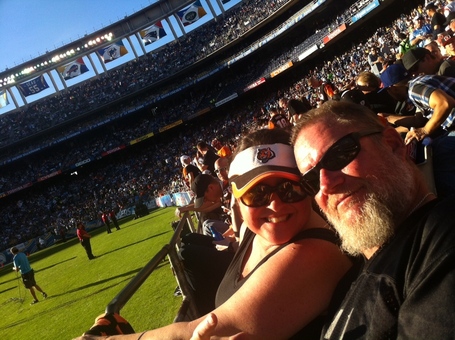 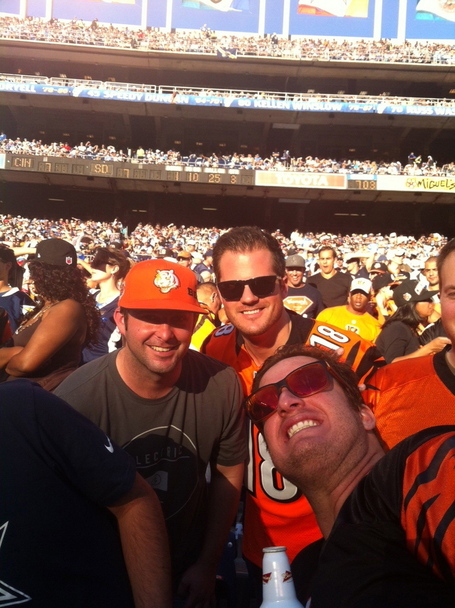 The Sweet Taste Of Victory:

Though it wasn't the highest-scoring affair, the Bengals pulled off a tight one and capped an amazing weekend in Southern California. We were pretty beat by the end of the day and the drive home was rough, but we had the time of our lives. Before we left the stadium, we took a few minutes to bask in the win and appreciate our seats one final time. 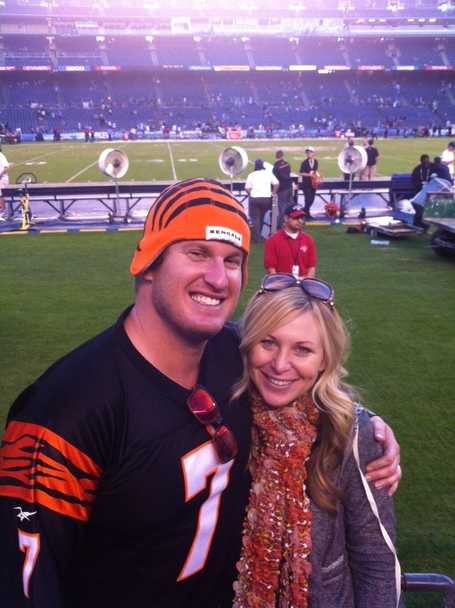 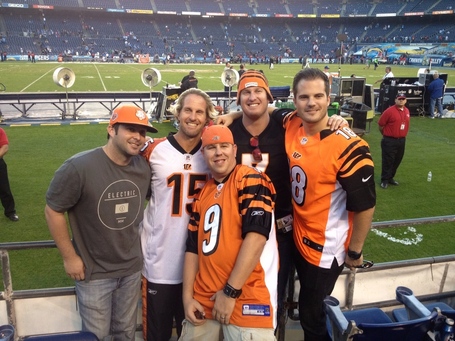 Thanks for reading and sharing in my my mini-journal, of sorts. The intention of the two posts were not to come off as braggadocios about the time I had, but rather to share my memories from the weekend with all of you faithful readers of Cincy Jungle. If any of you went to the game, I'd be stoked to hear your stories as well!