Rookie tight end Joseph Fauria isn't the biggest contributor between the 20s. But if the Lions reach the redzone, the Bengals could face one of their greatest threats that they've seen this year.

Share All sharing options for: Lions TE Joseph Fauria is the greatest red zone threat the Bengals have seen

The routes are simple. Both tight ends run go-routes while the receivers run to the 15-yard line and curl in. 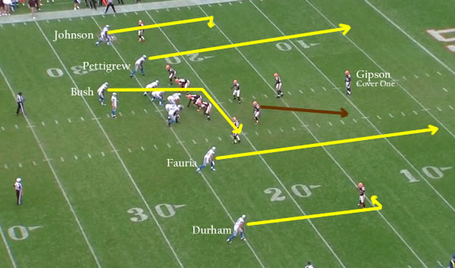 With linebacker Craig Robertson covering Fauria and Gipson holding station in center field (since the routes don't cross the middle, he becomes neutralized), Stafford throws a rainbow pass to Fauria. The rookie tight end turns and hauls in the pass over Robertson for the touchdown.

Lesson learned here, don't cover Fauria with a linebacker. Though only armed seven receptions this year (five for touchdown), these are the type of plays that the rookie is making this year.

"As soon as he signed as an undrafted free agent back in April, this is what fans had in mind because he's so big (6'7)," Sean Yuille with SB Nation's Pride of Detroit told me. "The thinking all along was that he could become a big-time threat in the red zone, and that's pretty much been his strict role with the Lions so far. He hasn't played a ton, but he's made the most of his limited amount of snaps by catching touchdowns on more than half of his targets."

Fauria signed as a college free agent after going undrafted during the 2013 NFL draft. Originally a Fighting Irish at Notre Dame, Fauria was suspended during his sophomore season by the office of Residential Living, but the allegations were reportedly minor at the time (aka, running a prank). Nothing concrete was publicized. Fauria transferred closer to home at UCLA where he completed his collegiate career with 88 career receptions, 1,139 yards receiving and 20 touchdowns. In six games with the Lions, he has seven receptions for 66 yards receiving and five touchdowns.

"What separates Joe," said coach Jim Schwartz via Monday Morning QB, "and has allowed him to make those plays is he’s really strong and has really strong hands." And he’s ridiculously tall. On Sunday in Cleveland, he had five inches on two of the linebackers covering him in space, and with the accuracy of Stafford, Fauria was able to pluck balls down and not get them stripped—because, as Schwartz said, he has such a strong grip on the ball."

If you look at the touchdowns against the Browns, the Lions aren't doing anything creative. Fauria runs towards the endzone and Stafford lays it up for the tight end. Think Andy Dalton's relationship with wide receiver A.J. Green. It doesn't matter if the throw hangs in the air like a tee-ball; the purpose is for Fauria to take advantage of his size and athleticism against smaller defenders.

With 3:31 remaining in the first quarter against Cleveland, Fauria lines up wide right against Browns cornerback Joe Haden at the one-yard line. Stafford lobbed the throw towards Fauria, who jumped over the defensive back for the touchdown.

These type of pass and catches have been the entree for the Stafford/Fauria relationship this year -- especially within the five-yard line. With over two minutes remaining against the Browns, Stafford throws a back-shoulder pass at the one-yard line that Fauria (who lined up as a wide receiver) grabs with T.J Ward covering.

With under seven minutes remaining against the Minnesota Vikings at the one-yard line, Stafford lobs the football to Fauria, who makes the defensive back look silly.

It was slightly different against the Washington Redskins in week three, though much of it was the same result. The Lions have third and five from the Redskins five-yard line with 14:53 remaining in the second quarter. Fauria is in a two-point stands just outside the left tackle's shoulder. London Fletcher blitzes, forcing Stafford to release the football over the middle, where Fauria out-talents two defenders for the touchdown.

"Going forward, Lions fans want to see him used in more than just red zone situations, but he's certainly been effective in that role," Yuille says.

Perhaps calling Fauria the greatest red zone threat that the Bengals have seen this year is a bit over-dramatic. That being said, if Cincinnati doesn't recognize the impact he has during goalline situations, this touchdown trend will only continue this weekend when the Bengals head to Detroit.