If you're not sure whether the Bengals will be on TV for you, they just might be.

If you're planning out your Sunday, unsure if you'll be able to watch the Bengals and Lions due to coverage, then wonder aimlessly no longer! The Bengals will broadcast on CBS and most of the upper-Midwest will see it; including all of the surrounding states in Ohio, as well as Illinois, Michigan (for obvious reasons), Wisconsin, Minnesota and North Dakota, as well as parts of Montana (when was the last time we mentioned Montana?), South Dakota, Iowa, Missouri, among other states. Even the Houston market in Texas. 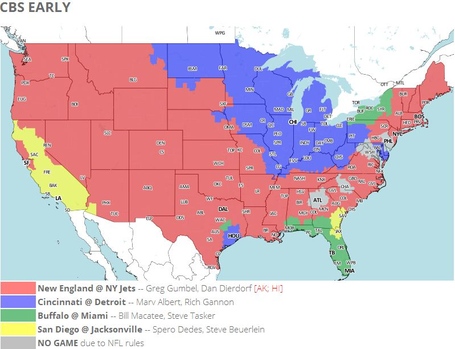 For those of us in Cincinnati, we'll get the Bengals for the early CBS game and then the Browns and Packers as the late CBS game.  Though sounding dreadful, the late afternoon games that CBS is carrying this weekend isn't great with Houston in Kansas City and Baltimore in Pittsburgh (I'd prefer the latter, but they don't ask us common folk).

Fox will show San Francisco 49ers and Tennessee Titans as their single-header during the late afternoon.