As if Andy Dalton detractors aren't hating enough of their lives, the third-year quarterback has been winning a lot of people (that wish to wage the argument) over after a run of quality performances against the Bills and Lions. Admittedly, the return of inconsistent Andy always sits like a shadow in the back of my mind, but for now, we're enjoying it.

And so are you.

After millions and millions of you voted, we have a winner: Bengals quarterback, Andy Dalton. 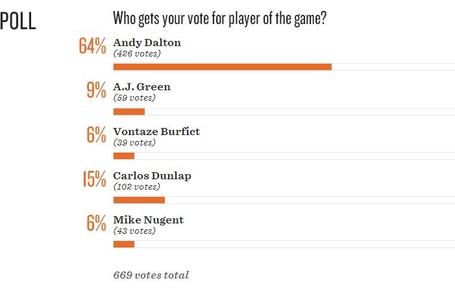