Bengals quarterback Andy Dalton has struggled in the last two games, but he's not alone.

Share All sharing options for: Andy Dalton shoulders the blame for recent struggles

The Andy Dalton debate is humorously childish, if not a complete waste of time that discourages quality discourse. We're not talking about criticizing the third-year quarterback after a bad game, or praising him during good ones. Everyone should express those opinions. It's instantly being labeled as a hater, apologist, or defender based on a single opinion from the most recent game that's frustrating. If Dalton had a good performance, defenders ask, where are the haters now? If Dalton has a horrific game, the defenders ask, where are the apologists now? Criticizing one play, makes you a hater. Praising another, makes you an apologist.

In fact, a realization occurred to me following Cincinnati's 20-17 loss in Baltimore: There are actually fans that enjoy watching Dalton fail, so that they can say, "see, told you. He's not the answer, so we have to draft a quarterback even though I don't really know anyone that's coming out next year." It's a sickness.

Dalton isn't going anywhere; cite all of the quarterbacks playing well today and the years it took them to get to that point if you want. Go ahead and waste time proposing ridiculous trade possibilities -- such as the one tweet about trading Dalton, BenJarvus Green-Ellis and a second round pick to Pittsburgh for Ben Roethlisberger, who is reportedly unhappy (despite denying those reports).

Is Dalton great? No. Accept that. Will he single-handedly win games for you? No. Accept that too. If not for Giovani Bernard and the defense, the Bengals aren't even in the picture against the Dolphins and Ravens. That's a strange concept. Team.

What we know about Dalton and the Bengals offense.

Questions about arm strength will never go away and Dalton requires everyone's A-game to perform well.

These aren't criticisms, it's just what it is. His play isn't dragging the Bengals down anymore than the offensive line who has allowed ten quarterback sacks combined during Cincinnati's two-game losing streak. Dalton was sacked five times combined during the quarterback's historical three-game run against the Bills, Lions and Jets.

Where is Cincinnati's running game and why is it that when the running game is applied, they're using the same philosophy between the tackles as teams use to milk the clock instead of gaining yards? Why does it take a deficit before the Bengals actually use Bernard more?

Where is Jay Gruden's offensive adjustment to counter Baltimore's effective pass rush with screens, draws or at the very least, quicker passing schemes?

It's like the Bengals are charting every play with such dedication that they're wasting early possessions to see how the defense reacts to those plays. And then they do little else to make those adjustments. Jay Gruden's game plan against the New York Jets was brilliant; since then, uninspiring. Yes, the Bengals have put the weapons around Dalton to succeed. But when those weapons appear to be questionably used, it won't make a difference.

The question about arm strength is actually a misleading subject.

Unloading a 50-yard pass hasn't been the issue; he can do that, though with some inaccuracies. It's the out-routes near the sidelines from the hash-marks. Dalton's first interception against the Miami Dolphins targeted A.J. Green's out-route that the defender was able to jump because the ball hung in the air. These issues will remain and they happened against Baltimore.

With 12:30 remaining in the fourth quarter, Dalton tried nailing A.J. Green on a ten-yard out. Once Green broke, Lardarius Webb recovered and broke up the pass. On the next play, Dalton lofted the football over Baltimore's defense to a wide-open Green for a 20-yard gain and a first down. You can't avoid the out patterns or else opposing defenses will cheat towards the middle. But Dalton needs extremely soft coverage for those to work.

There's no excuse for sailing two passes that led to interceptions; clearly blame that should be leveled on Dalton's shoulders.

Or was it the gusts of 20-plus mile-per-hour winds? It's not like Ravens quarterback Joe Flacco, dealing with the same conditions, was a model of greatness. Or maybe it was miscommunication?

As the two minute warning approaches in the fourth quarter, Dalton sailed the football over A.J. Green leading to a tip and interception. Yet, it looks like Green is running a square-in while Dalton is expecting something deep. 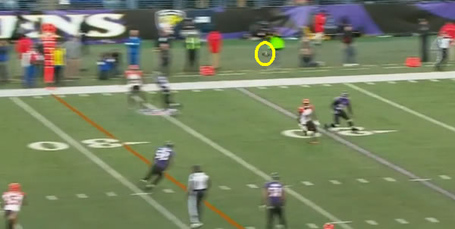 Miscommunication isn't a valid excuse. A turnover is a turnover.

Earlier in the game, Dalton threw another pick directly at James Ihedigbo. However, it looks like Dalton's target, Tyler Eifert, was running a go-route. Dalton tried hitting Eifert's back-shoulder, opposite of Daryl Smith's coverage but the football sailed directly at the Ravens secondary. Is that the wind? Despite the officials propensity to throw flags on Sunday, there is no penalty for weather. Maybe Dalton just shouldn't have attempted the throw in the first place as Eifert is appears covered.

With 7:32 remaining in the third, Dalton fires at Marvin Jones, who appeared to catch the football. Unfortunately, Lardarius Webb yanked the football away from Jones, leading to an interception.

That's hard to put on Dalton.

Endless these debates are, but our focus isn't the long-term viability of Dalton. He's too influenced by the production of the players around him and the plays that are being called. If the offensive line can't sustain their blocks, Dalton will be errant. If Jay Gruden calls long-developing routes as Baltimore has already proven to have an effective rush, Dalton will be erratic.

Does Dalton deserve a lot of the criticism when the Bengals struggle? Yes. Absolutely. But so does everyone else and giving them a free pass is artistic that mocks even political discussions where your opinion is the only one that matters.