The Bengals were actually moving the football in overtime before they were stoned on third and fourth down that led to a turnover. Is the play-calling to blame?

Share All sharing options for: Bengals vs. Ravens: Questionable play-calling in overtime

For the second time in as many weeks, Cincinnati's play-calling in overtime has resulted in suspicious reasoning. Last week against the Miami Dolphins, the Bengals passed on three straight plays with under seven minutes remaining in overtime from their own eight-yard line. The result was consecutive incomplete passes and a quarterback sack that resulted in a safety and Miami's win.

Against the Baltimore Ravens, the Bengals have third and two from the Ravens 33-yard line with 11:02 remaining in overtime. Instead of using the team's work-horse back BenJarvus Green-Ellis, who is on the roster to gain those tough yards (despite not really doing it well this year), the Bengals call Giovani Bernard. Perhaps at the time the thought-process made sense. Bernard actually picked up eight yards on the previous play and he's shown a tenacity to escape tackles. And his most recent run before that gained 16. However, the Ravens were defensively balanced on those runs.

On third and two, Baltimore loads the box with eight defenders (out of the picture in the screen below) and Dalton hands off to Bernard. No gain. Why, oh why? Well, when you have an offensive coordinator that's designing a blocking scheme that puts Tyler Eifert on Terrell Suggs, you're going to have problems. 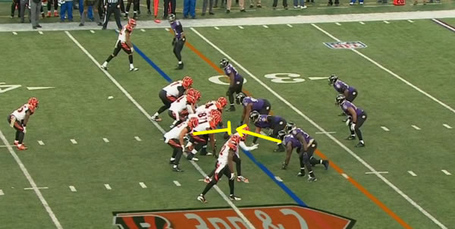 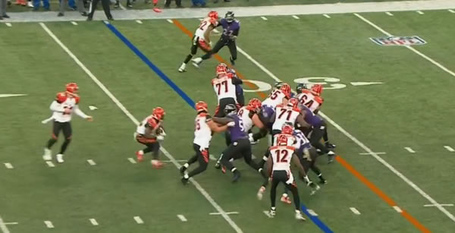 Eifert has been a serviceable blocker this year (he's missed a couple, no doubt), but you can't ask him to block Baltimore's best defender. It makes no sense; even if the play is away from him. It was Suggs that made the first hit that stoned Bernard and forced the Bengals to go for it on fourth down.

Bernard isn't entirely without blame either. Had he put his head down and charged the instant he received the handoff, he may have enough room on the left to gain the first; something that probably should have been asked of Green-Ellis. Instead he slows into his usual shifty mode that's enabled to many big runs, but also a death move of a short-yardage situation where every defender is powering down-hill.

With the wind being as gusty as it was, it made sense to go for it. A punt could have been an option, but if that rolled into the endzone for a touchback, Cincinnati gains 13 yards. Not much. Plus, Kevin Huber wasn't kicking the ball well all afternoon.

The Bengals called a pass with Giovani Bernard out of the backfield. It was doomed from the beginning as James Ihedigobo read the play and forced Bernard to redirect. God love, Bernard for trying and trying to find a lane (there was a wall for him if he just kept sprinting towards the left sidelines), but the 11-yard loss was the worst possible outcome.