Cincinnati Bengals defensive tackle Brandon Thompson is a good run defender who should limit the opposing offense's running game. On that, he's capable of limiting Atkins' absence for the rest of the year.

It was a question posed with extreme curiosity. How would the Cincinnati Bengals react to losing Pro Bowl defensive tackle Geno Atkins for the season? We broke down Brandon Thompson's performance against the Miami Dolphins last week as the next man up replacement. Despite inviting a host of free agents this week, the Bengals eventually stayed with Thompson as the two-down defensive tackle, using a combination of Wallace Gilberry, James Harrison and even Carlos Dunlap as interior rushers (there was a lot of rotation). Ultimately, while the game was playing out and Andy Dalton was winning fans over, there weren't many people thinking, "I wish we had Geno back".

And there was no reason to. Thompson did what Thompson does best: Frustrate the opposing offense's running game. He was almost always in during every first and second down, but sidelined during third down situations with more than 3-4 yards to go. Despite finishing the game with only three tackles, Thompson's greatest impact was the refusal to be bullied by Pro Bowl guard Marshal Yanda. Due to Thompson's production, the Ravens rushing offense only generated 85 yards with a meager 2.8 yard/rush average.

With 14:29 remaining in the first quarter, the Ravens have second and four from their own 29-yard line. Thompson, in a three-technique, fights through Yanda's block on a run targeting the right edge. Thompson, who had pushed Yanda a yard deep into the backfield, wraps Ray Rice's ankles for a no-gain. Conclusively, Thompson was extremely impressive against Yanda. 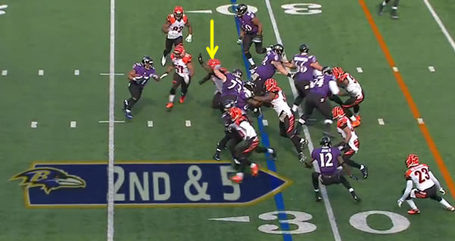 Later, on Baltimore's flea-flicker with over 11 minutes remaining in the first quarter, Thompson is driving through multiple blockers (Yanda and Michael Oher), two yards into the backfield and within arm's reach of Ray Rice just as the running back flips the football back to Joe Flacco. 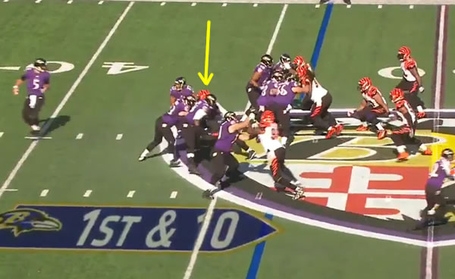 Thompson made the tackle on the following play after a two-yard gain and on the play after that, was the sacrificial lamb in a goalline situation. As the Ravens are threatening just outside the Bengals two-yard line, Thompson dives through the offensive line in the hopes of congesting Vonta Leach's lane. 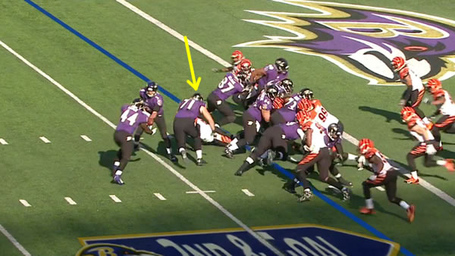 With over ten minutes remaining in the second, Thompson drives Yanda two yards into the backfield. The congestion forces Bernard Pierce to cut inside where Domata Peko, Chris Crocker, and even Thompson himself, make the combined tackle for a one-yard gain. 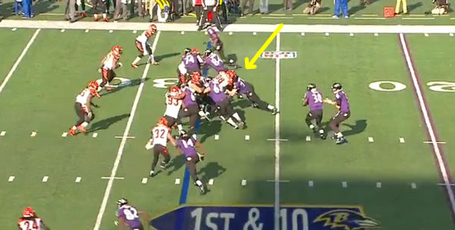 This is the powerful effectiveness provided by Thompson, directly helping the rest of Cincinnati's defense.

Less than nine minutes remain in the third quarter with the Ravens on their own 31-yard line. Here's an example of the job for a typical defensive tackle -- aka, not being all Atkins-like. Consume offensive linemen, and if the play is coming at you, congest, congest, congest.

As the snap is taken and the football is handed off, Thompson felt the double-team coming. Instead of fighting through it, he drops to all fours, ensuring that the lane wouldn't be cleared. Since the resulting play led to a significant pile, we had to highlight body parts of the sacrificial Thompson. 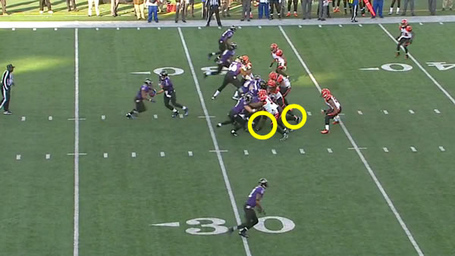 Rice had no where to go and gained roughly a yard.

With two minutes remaining in the third, Thompson again collapsed to the ground. Instead of taking on two blocks, he grabbed the attention of three offensive linemen, giving Vontaze Burfict a free lane and Michael Johnson limited resistance (he squared off on a tight end) for the one-yard stop.

One of the more impressive things with Thompson is his first step. Routinely the first to make contact on virtually every snap, Thompson can snap into position and then use his inherent brute strength (either a bull rush and removing the player entirely with pure upper body strength) to close the lane like this second quarter run. 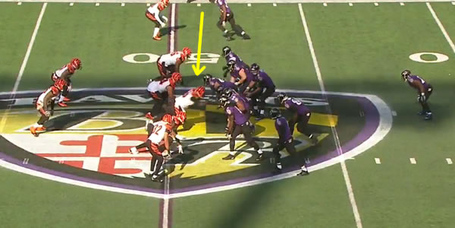 He definitively did it again with three minutes remaining in the third, but the play was a pitch away from Thompson so he had no impact on the play. 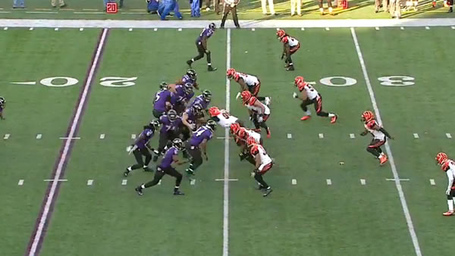 There are things that Thompson will have to work on. For example, when the offensive lineman weathers Thompson's onslaught and regains his balance, there's not much Thompson does after that. His arsenal of moves mostly depends on his strength and quickness of his first step. He wasn't very effective with a pass rush, especially once his first step was countered -- if that first step is quick enough to gain the advantage, he can put on some pressure.

Thompson is an encouraging young defensive tackle with plenty of room to develop. Most of all, his production prevented most from remembering that Geno Atkins is gone for the year. Whatever you do, don't use the same shades with Thompson that you use with Atkins. They're different animals -- Thompson is more like a Pat Sims/Domata Peko than Atkins. But then, no one is Atkins.