The Cincinnati Bengals have questions that need answered on their roster for Sunday Night's game against the Pittsburgh Steelers. Yet, the offensive line is not one of those questions.

+ Now we know the status of Terence Newman, who replaces him as the starting cornerback?

+ George Iloka's head injury presents a quandary for the slot cornerback, but an opportunity for a much-maligned Brandon Ghee.

+ Bengals and Steelers have Ed Hochulli this weekend. Is Jeff Triplette available again?

+ One change and the Bengals offensive line becomes the best unit on offense.

+ Cincinnati needs to consider signing Anthony Collins as soon as they're able.

Give me Dre Kirkpatrick. Or give me death.

A bit of an overreaction? Sure. We do that in sports, overreact.

With Terence Newman recovering from an MCL sprain and, at the very least, out this weekend against the Pittsburgh Steelers, the question becomes, who is the "next man up"? The general belief is that Dre Kirkpatrick will step into the starting role, which presents an unlikely opportunity for the second-year cornerback.

"Terence and Leon (Hall) and Adam (Jones) have been holding Dre at bay," head coach Marvin Lewis said in his Monday news conference. "It's been hard, but they've had the big stiff-arm on him trying to keep their jobs from him. They've been great mentors for him. He'll obviously get an opportunity to expand his role."

Lewis' point is one that has actually frustrated me in the past. When the team drafted Jerome Simpson in 2008, they glued his posterior to the bench while signing veteran players that really offered nothing in the "just win" department. Laveranues Coles should have retired before his arrival in 2009. Antonio Bryant needed a year to get his knee right in 2010. Terrell Owens put up the numbers, but the Bengals won four games that year. Big deal. Though the misguided attempts to win now while developing for tomorrow, it stuffed Simpson in the back page of the classified section. Misguided in the sense in that they struggled to develop players in the past but have since become artists. 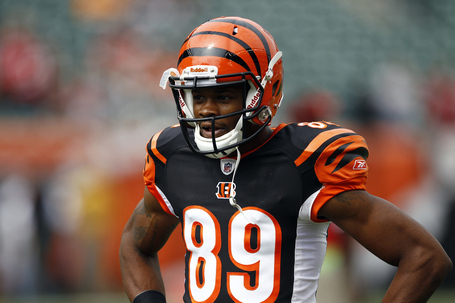 For three years, there were rumors (and sometimes reports) that Simpson was struggling with the playbook. Read option routes weren't working and basically Simpson's lone offering was not unlike backyard football -- just go deep, dude. He was inactive most weeks and fans grew impatient and frustrated at the lack of production from a second-rounder while someone like DeSean Jackson was on the board and selected four picks later.

Eventually injuries to Owens and Chad Johnson in '10 forced Simpson into the starting role for the final three weeks... and he thrived. In the final two games of that forgetful season, Simpson caught 18 passes for 247 yards receiving and three touchdowns. He followed that up with a 2011 campaign by generating career-highs in receptions (50), yards receiving (725) and touchdowns (4). And he did that with a rookie quarterback in Andy Dalton that showed tremendous affection for A.J. Green, another rookie receiver. Remember the game against Denver in 2011, the second week of the regular season? Simpson posted an 84 yard reception and totaled 136 yards receiving with A.J. Green adding ten grabs for 124 yards receiving and a touchdown.

The comparison of Simpson's eventual opportunity and Kirkpatrick isn't entirely accurate. The belief in Simpson's case was that he was never ready. Kirkpatrick has been more of a story saturated with injuries. Yet, both have faced roadblocks with veteran players hogging all of the playing time and forcing them to wait until an opportunity arrives due to an injury late in the season (when quality free agents are virtually nonexistent).

Leon Hall is out for the year with an Achilles and Newman could miss the rest of the regular season. If there was a time for the Bengals to evaluate what they have in Kirkpatrick, now is that time. And for Kirkpatrick, let's hope that we can ditch the storyline and pencil him as a significant contributor for the rest of this year and next. But that's on him.

Kirkpatrick did play 23 coverage snaps against Andrew Luck and the Indianapolis Colts on Sunday. He covered eight passes against receivers that Luck targeted and seven passes were caught for 60 yards receiving, including 32 yards allowed after the reception -- though a lot of that was during garbage time.

Brandon Ghee becomes another candidate in the next man up story

It's unknown if George Iloka will play Sunday after sustaining a head injury against the Indianapolis Colts. He could play, but concussion protocols requires time. Tests, tests, and more tests, usually based on the baseline testing during training camp that's compared to current tests after a workout to judge the player's condition. If he's still showing symptoms after a light workout, he starts from scratch. If not, the workouts are intensified until, he shows symptoms or passes all of the tests. Typically these workouts take place on Wednesday, so it's likely that he'll be a non-participant during practice.

If he can't play this Sunday night against the Steelers, figure that Chris Crocker replaces him as the starting safety with a void at the slot cornerback position that Crocker, Kirkpatrick, and Leon Hall, back in the day when the defense was healthy, played (NOTE: When the Bengals played three corners, Jones usually replaced Hall and Hall often played the slot, but they were interchangeable based on the situation).

I don't see the team relying on rookie Shawn Williams just yet, nor special teams prospect Tony Dye. If anyone, the team give Brandon Ghee an opportunity. And why not. They've held onto him for five years, despite the cornerback's durability issues over the years. Time for Ghee to reward the Bengals for their loyalty, patience and overall investment.

The beautiful song sung by Thor-like men of the trenches 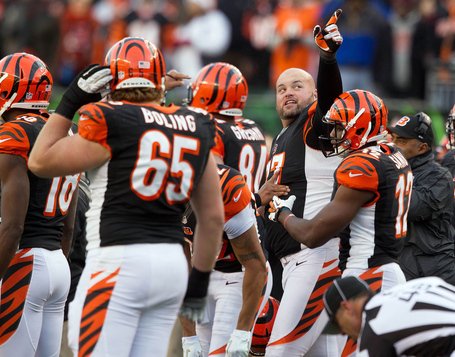 Let's not completely abandon the idea of Cincinnati's offensive line having a future; namely with Andrew Whitworth at left tackle, Clint Boling at left guard, Kyle Cook at center, Kevin Zeitler at right guard, and Andre Smith at right tackle. It's a good configuration but disputing the production of the new configuration is like arguing that fish can live without water.

With Anthony Collins at left tackle, Whitworth at left guard and Mike Pollak at right guard (and Cook and Smith at their normal spots), the offensive line's production has improved. In two games, they've held the opposing defensive pass rush to no sacks, one quarterback hit and six pressures.

Yet, nothing argues their production more than what they're doing on the ground. Against the Chargers, when this configuration went active, and the Colts, Cincinnati amassed 319 yards rushing and a 4.4 yard/rush average. If we just factor BenJarvus Green-Ellis and Giovani Bernard, those two have combined for 296 yards rushing, three touchdowns and a 4.7 yard/rush average.

If there is even a question whether this should be the configuration for the offensive line for the rest of the season, then someone needs a timeout.

Before attacking extensions in the offseason, sign Anthony Collins first 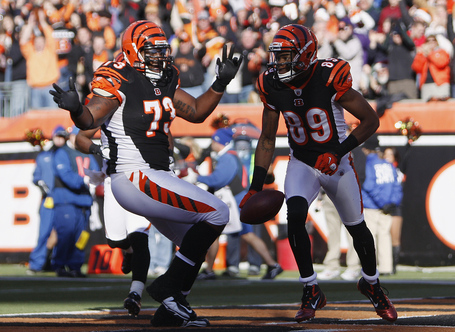 Depending on how demand goes for Collins in free agency (he didn't have much of anything after 2011), the Bengals will obviously have their attention on contract extensions with Andy Dalton, A.J. Green and even Jermaine Gresham. And let's not forget any last ditch effort to keep Michael Johnson around.

While most of us have come to a state of forgiveness with the Bengals front office, one of the reasons this team has been so good this year is that the roster behind the starters is equally lethal. How many teams can lose two starting guards while using one backup that was cast out of Indianapolis, moving the left tackle to guard and a backup offensive tackle to shut down Julius Peppers (in week one) and Robert Mathis?

And when you really think about it, how many teams can say boast that they've lost two starting cornerbacks, a starting linebacker, a Pro Bowl defensive tackle, two starting guards, and actually continue improving? With all of the injuries that Cincinnati has faced this year, they're riding a three-game winning streak with wins over the Chargers in San Diego and a division leader in the Colts.