The Pittsburgh Steelers safety Ryan Clark said on Wednesday that he didn't believe the Bengals respected the Steelers. That's probably not true, but this once intense rivalry does need some life.

Share All sharing options for: The now-dead Bengals and Steelers rivalry needs life

"The game is changing. For a while, with Carson (Palmer) and Chad (Johnson) and T. J. Houshmandzadeh, the games were very competitive. They were winning and then we went through a lull where we were beating the Bengals pretty regularly," Clark said in Wednesday's conference call with the Cincinnati media via Bengals.com. "But now with this young group of individuals they have there now, these good skilled players with an extremely good defense, I think the game has picked up a little bit.

"I don't think they necessarily understand the history, or know the history, or care about it. So I don't think there's a lot of respect for the Pittsburgh Steelers in Cincinnati. Those guys play hard, they play that way. They talk. So for me it's exciting. It's always good to play against good players, players who feel like they're better than you. It's a good game for both teams."

How do you not feel that?

Anthony Defeo •Behind the Steel Curtain

Cincinnati visits Heinz Field for a prime-time match-up this Sunday with a chance to put the final nail in the coffin of the Steelers playoff chances.

On this week's show we briefly looked back at the win over the Colts but we primarily focus on the fact that IT'S STEELERS WEEK BABY!!!

We were young lads playing on the rolling his of Cincinnati, enthusiastically welcoming this unfamiliar reality. The Bengals hired Marvin Lewis, who subsequently improved the attitude, habits and installed routines that encouraged winning, with a little help from recently signed veterans that were still in their prime. Change.

Adding power to Cincinnati's youthful punch, who had already drafted Chad Johnson, T.J. Houshmandzadeh, Rudi Johnson, (not to mention Corey Dillon in his prime), and an offensive line that would become the standard for what every line in Cincinnati is compared to today, the Bengals used their coveted first overall draft pick in 2003 on all-world quarterback Carson Palmer.

Nothing could go wrong.

By the '05 season, Lewis' third and Palmer's second after his redshirt rookie year, the Bengals had won 11 games, conquered the division and the football gods added a little icing by giving Cincinnati a home game against the Pittsburgh Steelers.

Thus, vengeance was to be ours.

It seemingly started when Paul Brown died on August 5, 1991. Months later, Sam Wyche was either fired or had resigned (depending on who tells the story). Boomer Esiason demanded a trade. The talent pool withered. Questionably qualified coaches were hired. Disgruntled attitudes, long-term injuries, and discord bred from a perfect storm that gave Cincinnati the NFL's greatest blackout.

Pittsburgh took advantage. In 28 games played from '91 through 2004, the Steelers won 21; most of them massacres. Ironically, frustration didn't originate from Cincinnati's role as the AFC Central's little brother; ownership was our target. Yet, our list, titled, who will feel our sweet revenge whenever we're competitive again, the Steelers was there. So when 2005 rolled around, we were dancing to the sweet music of redemption.

Carson Palmer and Chris Henry suffered injuries during the Wild Card game and Pittsburgh not only beat Cincinnati, they won the Super Bowl. That was the spark that really ignited a rivalry. 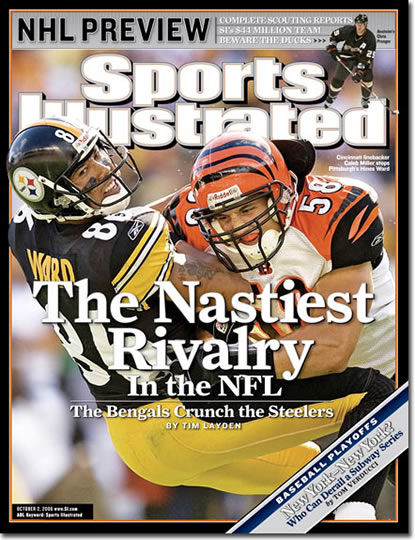 The Bengals repaid the Steelers for their insolence with a 28-20 win early in the '06 season. Pittsburgh, who was 7-8 by the regular season finale, responded by eliminating the (8-7) Bengals from the postseason in a 23-17 overtime win... on New Years "friggin'" Eve.

Nothing much has happened since. Pittsburgh swept the Bengals in '07, '08, '10 and '11, while the Bengals aberration year of '09 (they won four games in '08 and four games in '10), added their own season sweep. Neither team were particularly good the year that they were swept, dissolving this shortened rivalry quickly. And frankly, from Pittsburgh's point of view, Baltimore was their competition after '06... and they were right.

In the meantime, dusk had fallen on Carson Palmer's career in Cincinnati, transforming him from an elite quarterback to a game-manager with a ego-boosting defibrillator to inflate out of control egos. Chad Johnson gradually changed from a fun-loving, record-breaking receiver that made Bengals football enjoyable, into an unbearable narcissist whose lost concept of "team" lay hidden in the shadows while he became a product of his own self-commercialization.

Then things took an unexpected turn.

Andy Dalton and A.J. Green were drafted, while the entire defense was quietly overhauled with dependable leaders. They were a veritable pool, filled to the brim with talent. A reminder of old Steelers teams? The true essence of the AFC Central, now the North, defined by physical play? It was there. Cincinnati followed that model to become masters of what made the division so powerful.

Unfortunately, the timing seems to be off yet again this year. The Bengals beat the Steelers in week two on Monday Night Football with Pittsburgh facing elimination after opening their season with a four-game losing streak. After winning five of their next seven, falling one game shy of .500, the Steelers fell victim to a two-game losing streak to the Ravens and Dolphins.

"It went from '...and the week after that is at Cincinnati, which is a win, so they can really put a streak together before the playoffs,' to 'and then it's home against Cincinnati on primetime, so that will help our draft position' in just two short years," said Neal Coolong, head writer (and friend of CJ) at SB Nation's Pittsburgh Steelers site, Behind the Steel Curtain.

Cincinnati inwardly focused on re-development in '11 while sticking to a competitive model that failed to beat Pittsburgh until week 16 in '12. Yet, that win was more about returning to the postseason for consecutive seasons -- an accomplishment untouched for 30 years -- then it was beating a team that could be viewed as our Richard Cranium older brothers. Yes. It was nice that the achievement happened in Pittsburgh, eliminating the Steelers from the postseason -- one item checked off a to-do list of revenge that dates back to Dec. 24, 2006.

Now Steelers safety Ryan Clark is talking about respect. Is this the basis of an argument to reignite this rivalry? What was once intense, has become dormant. Will it recover? Will we see the nastiness of what was meant to be a long-term division fight between the Bengals and Steelers -- with the Ravens filling the void as a secondary powerhouse?

Maybe, but the Steelers don't need us; they have history (just ask them!), established rivalries... and now, their own problems. But we've needed them all this time. We have to validate our successes. As little brothers of the AFC North, we have to surpass our elders, make them aware that this time, we're not going away. There are no inward personalities; this crew has enough positive character that defines the team, not defiles it like previous squads.

"So now, instead of kicking the little brother around, he's not just fighting back, he's winning. To top it all off, the Bengals have what's tantamount to a small country's gross national product of cap space heading into 2014," said Coolong.

Rivalry or not, the Bengals respect the Steelers. It's possible that they remain at the top of a snow-capped mountain labeled, teams we respect, climbing to the top so that when the day arrives, everyone else will look up to respect the Bengals. A roster once full of castoffs that Mike Zimmer used to refresh declining careers, the Bengals have stabilized over the years, improving their front office personnel, scouting departments, and valuing character above overall talent. Maybe not identical to the "Steelers way" but Marvin Lewis would be lying if he didn't admit that the Steelers had influenced the Bengals one way or another -- capturing the essence of their model, or so tired of their shit that it was time to change.

The Steelers will rebound. They always do. This time we'll be waiting. This time, we want it.

Next Up In NFL