Bengals use of "Power O" runs is trouble for the Chargers

The Cincinnati Bengals have the weight and power to take games over with their Power O philosophy.

Share All sharing options for: Bengals use of "Power O" runs is trouble for the Chargers

It happened with 3:56 remaining against the San Diego Chargers. It was second down, with one yard to go, on Cincinnati's 42-yard line. Andy Dalton hands off to BenJarvus Green-Ellis and left guard Clint Boling navigated towards the second level, targeting the backside linebacker, Tourek Williams. Boling was waiting but Williams was aggressive, taking out an unexpected Boling

At that point, Boling's season was done. 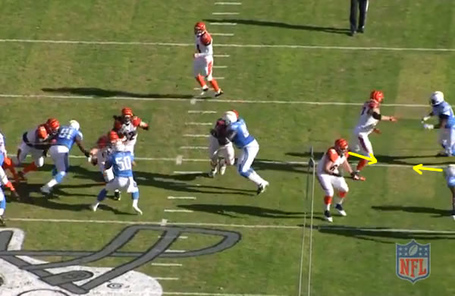 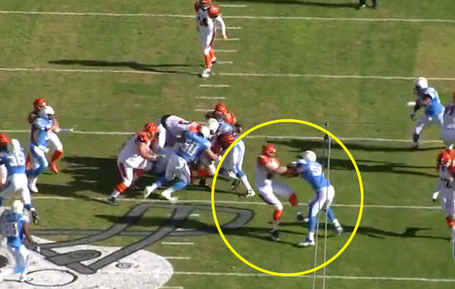 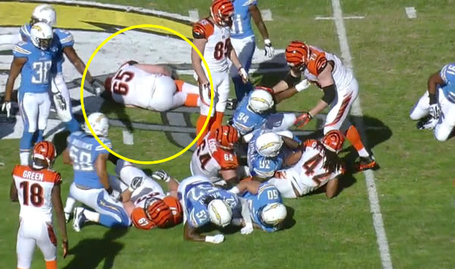 The Cincinnati Bengals reconfigured their offensive line as a result, moving Andrew Whitworth to left guard with Anthony Collins moving to left tackle (he started at right tackle due to, we believe, a disciplinary action with Andre Smith).

Prior to the first Chargers game, the Bengals were averaging 107.9 yards rushing per game and had surrendered 26 quarterback sacks. In the five games since Boling's injury, the Bengals have averaged 113 yards rushing with dominating performances against the Chargers and Indianapolis Colts. Despite only generating 57 yards against the Steelers (they were dealing with a 21-point deficit in the first quarter and had to abandon the run), the Bengals run game developed productive cohesion.

Let's look at one of their more successful running plays.

Two plays after Boling's season-ending injury, BenJarvus Green-Ellis would gain 13 yards on a running play that would characterize Cincinnati's favored call - a play generically called "Power O". The simplistic version is that Andre Smith and Mike Pollak double-down on the defensive lineman at the point of attack -- Smith then chips off to attack pursing defensive players (note, had the defender been over Smith or outside of Smith, Pollak would be the one navigating to the second level). Kyle Cook blocks the defender covering Andrew Whitworth and Anthony Collins blocks out. Whitworth pulls from left to right and takes out the first defender that he sees. 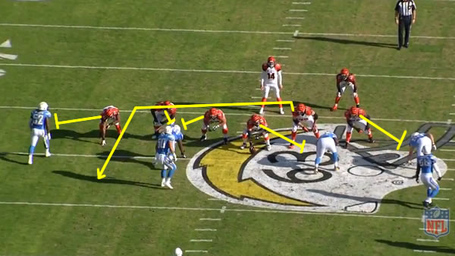 With everyone sealing their blocks and Whitworth leading through, it's an easy 13 yards and a first down. Four plays later, from the Chargers 25-yard line with :51 seconds remaining in the first, the Bengals called it again -- this time with Giovani Bernard in the backfield. San Diego's 3-4 alignment was more centered than off-set to the right. Most of the blocking schemes remained the same, with the exception being Pollak immediately heading off into the second level to block pursuing linebackers. 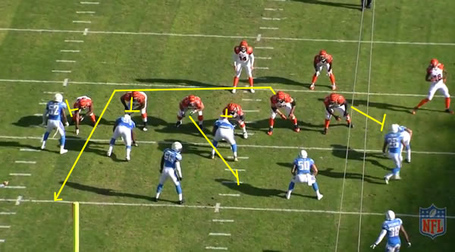 Bernard gained 13 yards behind the pulling Whitworth. And in both plays listed above, Gresham beautifully sealed his block and Whitworth shoved his guy several yards downfield.

Fast-forward to week 17, with 8:53 remaining in the second quarter against the Baltimore Ravens, the Bengals have first down from the Ravens 43-yard line. Against the Ravens' 4-3 alignment, Kevin Zeitler and Andre Smith play it like an over-shifted 3-4, doubling-down on the defensive lineman nearest the point of attack. Smith will chip off once the backside linebacker approaches. Everyone to the left of center Trevor Robinson blocks out and Andrew Whitworth sweeps around as the lead blocker.

The 4-3 alignment changes responsibilities. Kevin Zeitler (the right guard this time) and Andre Smith press to the second level while Andrew Whitworth blocks out the defensive lineman. What you see is a significant lane for BenJarvus Green-Ellis to gain seven yards, leaving a short-yardage conversion to eventually generate another first down.

The Bengals have had far greater success using the Power O against 3-4 alignments, especially against San Diego and we figure it'll be a significant part of Jay Gruden's game plan.