Share All sharing options for: Bengals vs. Falcons: Television coverage

The Cincinnati Bengals were up against the deadline (again), but thanks to the 85 percent capacity deal in the NFL, the city will have an opportunity to watch Sunday's game against the Atlanta Falcons. And not just the city, but many regions East of the Mississippi, from Ohio, Pennsylvania, the Virginias, Kentucky, Tennessee, South Carolina and many areas in the direct sight-line of Atlanta, Georgia. 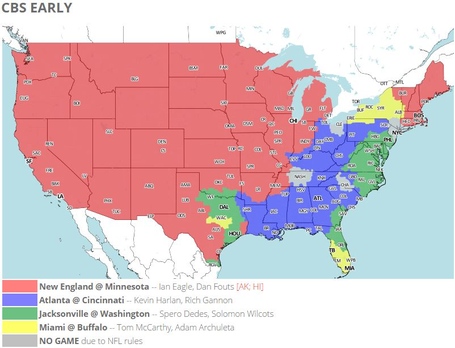 If you're in the Cincinnati region, we'll have the Falcons-Bengals on the early CBS game and the Chiefs-Broncos on the late game. Fox has a single-game this week with the Seahawks-Chargers at 4 p.m.

As for our friends across the pond in the UK, the Bengals and Falcons will be on Sky Sports. The Bengals will also be on the Armed Forces Network - Prime Atlantic.