We can reason that 20 things could result in a discrepancy in the first and second half against the Ravens... with Burfict's absence being one of them. Maybe the biggest one.

Share All sharing options for: Bengals defense needs Vontaze Burfict against the Falcons

What will the Cincinnati Bengals defense look like without linebacker Vontaze Burfict on the field?

It's a possibility, after all... a question worth pondering.

Burfict, who suffered a concussion during Cincinnati's 23-16 win over the Baltimore Ravens last week, was sidelined during practice on Wednesday and Thursday due to concussion protocols. Like his teammates Geno Atkins (feet) and A.J. Green (foot), Burfict was a full participant (according to the official report) during Friday's session.

However, unlike Atkins and Green, who are listed as probable, Burfict was listed as questionable Friday afternoon.

Will he or won't he play will be answered Sunday morning, no doubt. Knowing Burfict's propensity for quick returns and a high threshold of pain, he'll probably suit up.

Because Cincinnati will need him. Because plays like Justin Forsett's 19-yard touchdown don't usually happen. And it wasn't expert blocking by Baltimore (but it was pretty good). More like a confusing formation and a better play-call by the Ravens (ran away from the blitz and at the defensive end playing linebacker). 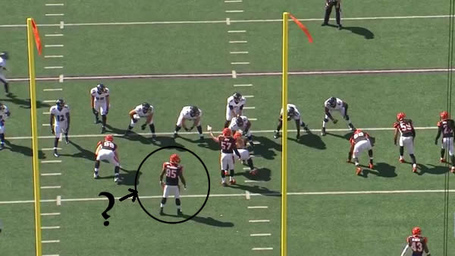 Gilberry's takes a false step to the right while Forsett takes the pitch and targets the right sidelines (from his perspective). Gilberry, with the speed of a quick defensive lineman and (maybe) the average speed of a linebacker, gets swallowed up with Margus Hunt and Domata Peko inside, while Dre Kirkpatrick and Terence Newman are driven out by pulling blockers. Gilberry, who broke free from the inside mess, missed the tackle and George Iloka arrives a step too late.

These things don't happen when Burfict is on the field.

Because he identifies the play quickly. Then finds the point of attack, sheds the blocker (more like shooed away), strips the football from the running back and, what the hell, recovers the fumble.

Burfict departed with 1:24 remaining in the second quarter. With that in mind, we broke down the two halves. In the first half, when Burfict played a majority of the team's defensive snaps, the Baltimore Ravens averaged 2.9 yards/rush and accumulated 100 yards of total offense. In the second half, with Burfict sidelined, the Ravens averaged 6.2 yards/rush and generated 323 yards of total offense (in the third and fourth quarters alone).

We can reason that 20 things could result in a discrepancy like that... with Burfict's absence being one of them. Maybe the biggest one. You shouldn't expect to lose your pro bowl linebacker and play as if nothing happened.

Will he play on Sunday?

Probably. That's his chemistry, provided that the doctors give him an approving thumb -- which they should considering he practiced on Friday. If not, against Atlanta's offense (123 yards rushing against New Orleans' defense) might be a bit more difficult to contain.