The Cincinnati Bengals and Baltimore Ravens kick off the regular season this Sunday. Both markets will have the games on their television... but will you?

Share All sharing options for: Bengals vs. Ravens: TV Coverage

The Cincinnati Bengal kickoff their regular season opener this Sunday... and perhaps a preview on how the AFC North will play out against a division rival? Ravens and Bengals? Either way, you expect to have a significant television presence for a game like this... but no. The markets around Cincinnati and Baltimore will enjoy the game (obviously), as will a small patch in southern Minnesota.

Beyond that, nothing. Sorry California, or anyone west of central Kentucky. Obviously complicating matters is the U.S. Open, which is shown on CBS, who will only have a single game this weekend. 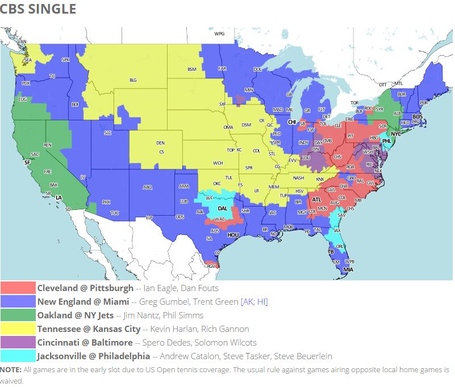 For those of us in Cincinnati, we'll get the Bengals and Ravens on CBS (1 p.m. ET). The early game on FOX (at the same time that the Bengals are playing, so who cares?) are the New Orleans Saints and Atlanta Falcons. The late game on FOX is the nationally televised San Francisco 49ers and Dallas Cowboys.