Bengals quarterback Andy Dalton was one of seven candidates for the Cincy Jungle most valuable player (also known as the CJs) during Cincinnati's 42-28 win over the Indianapolis Colts. Dalton completed 24 of 35 passes for 275 yards passing with four touchdowns (three passing, one rushing) with a passer rating of 120.5. He was the overwhelming winner in our weekly award.

Overwhelmingly, he won with nearly 50 percent of the vote -- the offensive line came in second at 24 percent.

This is Dalton's third CJ this season, tied with linebacker Vontaze Burfict for most on the team, and the first that someone on offense earned since week nine (Giovani Bernard against the Dolphins). 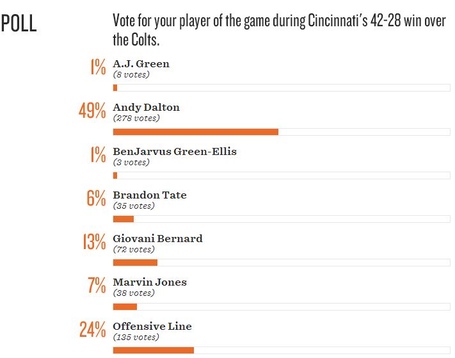