The projected coverage map for the Bengals and Colts is a little smaller than one would have thought.

Sunday's game between the Cincinnati Bengals and Indianapolis Colts, may have the greatest impact in the postseason seeding in the AFC. Whoever wins, holds a commanding tiebreaker if both teams finish the season with identical records. Additionally, if the Bengals win, at the very least they maintain a two-game lead for the AFC North championship with three games remain. If the Colts win, they secure the AFC South championship (they win it anyway if the Denver Broncos beat the Tennessee Titans).

Yet, due to television contracts and rotating doubleheaders, the Bengals and Colts will play on a network (CBS) that's only allowed to show one game per region -- Fox has the doubleheader.

Therefore, two teams, both 8-4, with significant postseason relevance, won't be seen by as many people as (perhaps) it should. People in the extreme Northwest (Seattle, Oregon, Idaho) will have the opportunity, as well as Southern Nevada, an extremely southern portion of Arizona, parts of the Carolinas and obviously the regions around Cincinnati and Indianapolis. 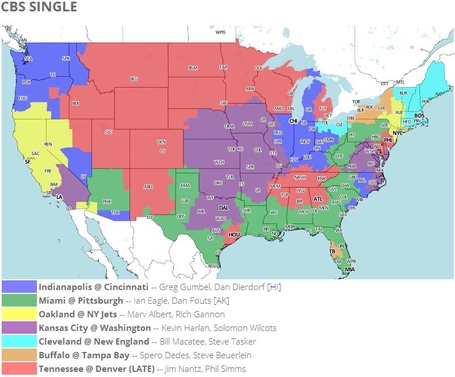 Due to NFL rules, Cincinnati actually won't get an early Fox game (not that that matters) but at least we'll get the second- best NFC matchup between the Seattle Seahawks and San Francisco 49ers. Or maybe the top game -- if Seattle wins, they claim the NFC West. However, NBC has two 9-3 teams competing between the Carolina Panthers and New Orleans. later that night