Bengals vs. Bills: Key to shutting down the Bills rushing offense

The Buffalo Bills, who are hosting the Bengals this weekend, have a successful rushing offense that the Cincinnati's defense will need to contain.

Share All sharing options for: Bengals vs. Bills: Key to shutting down the Bills rushing offense

There's no doubt that Cincinnati's greatest assignment on defense is the neutralization of Buffalo's running game. The Bills are currently ranked third in the NFL, averaging 152.6 yards per game with a league-leading three runs of 40 yards or more. And they're not just beating mediocre defenses either; four of the five teams they've played this year feature top-ten rushing defenses (Panthers, Jets, Ravens, Browns).

How are they so effective? Obviously the blocking helps (you don't do well in the NFL without good production from your offensive line, despite what advanced statistics/metrics claim). But good instincts and aggressive down-hill running by C.J. Spiller and Fred Jackson, who have combined for 605 yards rushing this season and an average of 121 yards/game, have been primary factors.

With 6:57 remaining in the second quarter against the Ravens, Jackson takes the handoff from Baltimore's 16-yard line. He bolts through the line of scrimmage and sidesteps a potential tackler to score the touchdown. But look at the running lane, sealing Jackson's rushing lane for the eventual burst. 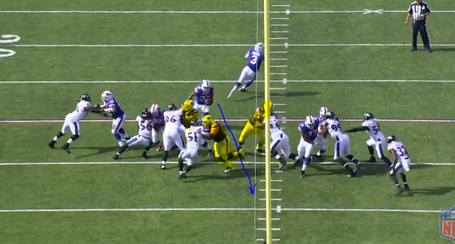 After forcing Matt Elam to lean in one direction, Jackson shifted to the other and score the touchdown. These guys can make the first defender miss, especially in the open-field.

Later in the game with over 14 minutes remaining in the fourth, Buffalo has first down from their own seven-yard line. Cordy Glenn and Colin Brown open a lane for Jackson's 10-yard sprint when Baltimore had no line of defense until Jackson reached the secondary. It's an easy burst for significant gains that demoralizes a defense. 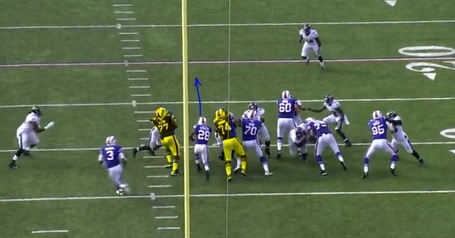 The Jets showed a model on how to apply containment, usually forcing both running backs to stretch plays towards the sidelines. With 5:51 remaining in the first quarter, initial penetration by Damon Harrison forced Spiller to bounce it outside. Linebacker Demario Davis filled the next gap, forcing Spiller to journey down the line of scrimmage for an opening. Kyle Wilson held contain, eventually forcing the two-yard loss on Antonio Allen's tackle.

On the next play, Muhammed Wilkerson penetrated the line of scrimmage, again forcing Spiller to bounce outside where a free-roaming David Harris made the tackle on the three-yard loss. 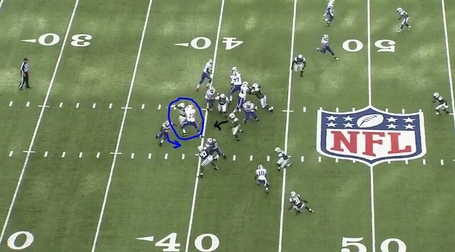 Though forcing Bills running backs to take an eastern-western approach will greatly neutralize their effectiveness, the Bengals defense can not sleep on the cutback lanes.

Early in the third quarter against the Cleveland Browns last week, Spiller redirected from the point of attack to expose a significant cutback lane. A quick dosey doe around T.J. Ward's awful gap selection and explosive speed opened the field for Spiller's 54-yard touchdown. 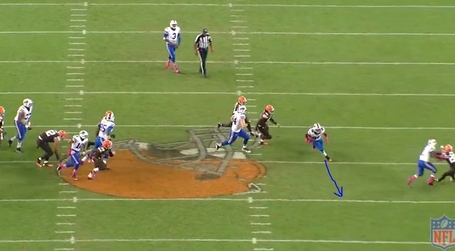 New York Jets linebacker Quinton Coples maintained the cutback lane in the second quarter in week three. Once Fred Jackson realized that David Harris was filling the targeted lane, he cut-back to his left where Coples filled the cutback lane or a two-yard loss. 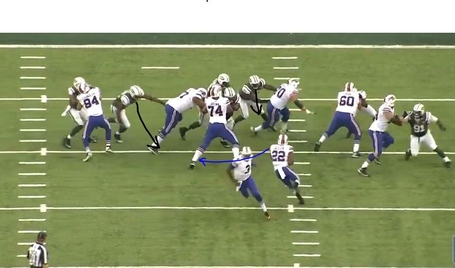 Whether it's the cutback lanes, or misdirection, the Bengals have to maintain gap control at the line of scrimmage. Obviously these are very basic defensive assignments applied to every opponent in every game at every level in football. They're from the family of common sense. However, the Bills are a team that could expose those failed assignments if Cincinnati's defense doesn't match Buffalo's aggressiveness.

However, the best defense against Buffalo's rushing offense is actually Cincinnati's offense. If Andy Dalton and company can open with a quick score, if not an early double-digit lead, it'll force Buffalo to rely on the inexperienced Thad Lewis at quarterback. In five games this year, when the Bills have a losing deficit higher than one possession, Buffalo throws at a 2-1 ratio; which is fairly common in the NFL.

Get 'em down early and they will take to the air.