Andy Dalton had a good game and some excellent throws. We take a look at three.

Not everyone was happy about Andy Dalton's performance, despite throwing for over 300 yards and generating three touchdown throws. There are some pointing out the 249 yards after the catch attributed to Bengals wide receivers, but we feel that critics are just going to criticize while refusing to credit Dalton during his good moments. It's like the criticism against Marvin Lewis, who receives far more blame than he deserves during losses, but isn't given credit for situations that he should be (such as going for it on fourth down).

Let's take a look at a couple of Dalton's throws on Sunday.

I loved his touchdown to Marvin Jones in the third quarter. It's third and eight from the Bills ten-yard line at the 10:56 mark. Buffalo only rushed three players. That leaves eight defenders to defend 20 yards, making it extremely complicated for any quarterback to complete a touchdown throw in the NFL. Once his initial reads were covered, Dalton rolled out to the right (not that it was necessary, but we've become accustomed to it). 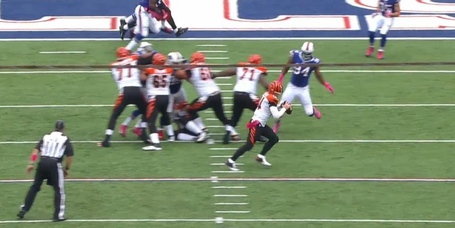 Eventually Dalton found single coverage near the sidelines with Jones. While on the run, Dalton fired an accurate rocket to Jones near the front right pylon, giving the Bengals a 24-10 lead.

Later in the quarter, when the Bengals pieced together an eight-plus minute possession, Cincinnati had fourth and 15 from the Bills 34-yard line at the 4:46 mark. It's too close to punt (no real gains) and the distance for a field goal is risky (missing it gives Buffalo quality field position).

So the Bengals go for it.

Cincinnati opens in three-wide formation with Dalton in shotgun and BenJarvus Green-Ellis and Jermaine Gresham flanking their quarterback (both would stay in to help with pass protection). Wide receiver Dane Sanzenbacher lines up in the slot and beats defensive back Nickell Robey off the line of scrimmage. Dalton throws one of his best passes of the game, lofting the football just over Robey while Sanzenbacher has the best one-handed reception of the game.

Pressure? Forget about it. The Bengals should have scored on the possession, but Nugent's 34-yarder sailed wide right.

Let's fast forward to overtime when the Bengals have the ball. A.J. Green opened the possession with an offensive pass interference that pushed Cincinnati back to their own 13-yard line, needing 20 yards to convert the first down. Green made amends with a 12-yard catch, setting Cincinnati up with second and eight from the Bengals 25-yard line with 13:54 remaining. Dalton waited until Mohamed Sanu was ten yards into his route before releasing the football.

Sanu had yet to turn around with Aaron Williams maintaining excellent coverage. But the pass was spot-on and Sanu was capable enough not to be distracted, while using his body to keep Williams separated from the football.

The conversion allowed Cincinnati to maintain possession, picking up another first down on Giovani Bernard's 23-yard reception out of the backfield. Though the Bengals didn't score points on the possession, it helped Cincinnati claim field position in overtime that would eventually become a catalyst to win the game.

Sure, he had help from his receivers; which is kind of their job anyway. But Dalton was good, accurate, and on the same page with his receivers. It's a good point for the offense to generate momentum with 10 games remaining on the schedule.