The Cincinnati Bengals are receiving a lot of attention or their goalline stand early in the second quarter. But another defensive effort later in the quarter was just as important.

Share All sharing options for: Defensive stand during the two minute warning

For good reason, much has been made about Cincinnati's goalline stand early in the second quarter. Buffalo was moving the ball with relative ease at this point, scoring a touchdown on the previous possession and threatening with another at the Bengals one-yard line. Stuffed, stoned, and sacked, the defense forced a turnover on downs and the Bengals offense responded with a 98-yard touchdown drive. It was literally the "turning point" in Cincinnati's eventual win, despite a furious comeback by Buffalo that required overtime to fight off.

Another effort to stonewall Buffalo's offense happened within the two minute warning in the first half. Bengals quarterback Andy Dalton threw the football out of bounds on second down, which is usually a far more productive play than absorbing the sack and losing yards which naturally stalls possessions. Unfortunately, Dalton didn't see Jim Leonard on the following play, who returned an interception 41 yards to the Bengals 38-yard line.

Buffalo, who were on the verge of facing a 14-point deficit inside the two minute warning, were now in a position to tie the game entering half time -- rather important considering that Buffalo would receive the kickoff to open the second half.

Pfft, says the defense. We've got this.

The Bills have first down with 1:44 remaining in the first half when they called a running back screen to Fred Jackson. As Eric Wood, Colin Brown and Kraig Urbik depart from the line of scrimmage for their down-field blocks, Burfict kept his eyes in the backfield, launching as soon as he sniffed a screen.

The play shoved Buffalo from the Bengals 38-yard line to the 41, with an expiring clock that pressures young quarterbacks into making significant plays -- sometimes by holding onto the ball too long.

On the following down, Domata Peko shoved left guard Colin Brown just enough to get the offensive lineman off-balance. But the time Brown recovered, Peko had swarmed past the lineman. Can you imagine Thad Lewis' response seeing a big-ass Samoan with a flow of beautiful hair approaching like the speed of an oversized fullback? 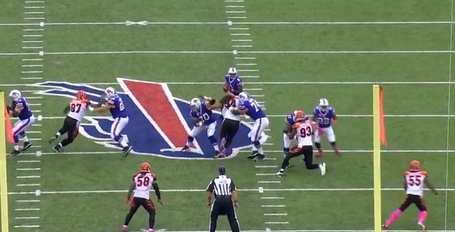 Despite only receiving credit for a shared sack, this was all Peko as Atkins entered around the time that Lewis was collapsing into the green ocean. Atkins would have his day though, pressuring Lewis into throwing a terrible pass for incomplete on third down, forcing the Bills to punt.

Brian Moorman's ensuing punt rolled out at the Bengals one-yard line; initially called a touchback because it appeared that it hit the pylon but went out of bounds first before it kicked back in. The Bengals, desperately wanted to end the half, found enough room to take two knees, maintaining Cincinnati's 17-10 lead heading into the locker room.