Bengals rushing offense is heating up

Share All sharing options for: Bengals rushing offense is heating up

Cincinnati's running game has really heated up this month. Putting it mildly, when the Bengals run, they win. Three times this year have the Bengals surpassed the 100-yard milestone; they've won all three. And the fourth win against the Packers, Cincinnati scored two rushing touchdowns. Now one will argue, of course they win while running or 100 yards because most of those yards are generically acquired during mop-up duty. Actually, if people use that argument, clearly they're not watching these games. Cincinnati has only secured one win this year (Pittsburgh) by the fourth quarter, while wins against the Packers, Patriots and Bills went down to the last possession (and overtime, respectively).

Anyway, back to the original point. Cincinnati followed up an impressive 162-yard effort against the Patriots with a season-high 165 yards against Buffalo on Sunday. In those two games alone, (327 yards rushing) the team has nearly matched their totals for the entire month of September (335).

It's not just the yardage either. Cincinnati has renewed their offensive philosophy by utilizing the running game, averaging 40 carries per game, compared to only 25 carries per game in September, with an improved yard/rush average.

For one thing, the Bengals are playing lesser defenses against the run. Currently the rush defense for the Patriots and Bills rank No. 24 and No. 28 respectively. Pittsburgh is the only team that Cincinnati played in September with a rush defense worse than No. 12; we hate to down-play it, but it's nevertheless an unavoidable fact that we're not simply ignoring.

A combination of zone blocking and power blocks are helping Cincinnati thrive, two schemes that the offensive line is accustomed to; the zone blocks allowed the Bengals to neutralize Buffalo's aggression this week while power blocks were applied to gaining short-yardage situations and clock-milking possessions. More importantly, the Bengals are exposing available cut-back lanes, which BenJarvus Green-Ellis is taking significant advantage of.

It's early in the first quarter and the Bengals have second and seven from their own 28-yard line. Andy Dalton nailed a quick hook to A.J. Green for an eight-yard gain, setting up a relatively short second down effort. Cincinnati comes out with two-tight formation, putting Tyler Eifert in the backfield in a variation of the off-set I. Green-Ellis will target the gap between Clint Boling and Andrew Whitworth with Eifert lead blocking.

Whitworth guided linebacker Arthur Moats around the ball-carrier, not unlike pass protection. Note how Alan Branch lined up on Clint Boling's outside shoulder? Boling had a nice first step that gave him the advantage by placing himself between the defensive lineman and Green-Ellis' running lane. Eifert led through and wiped out Da'Norris Search.

Green-Ellis picked up six yards and the first down.

After the defense's goalline stand early in the second quarter, the Bengals have first down at their own two-yard line. Following a two-yard run by BenJarvus Green-Ellis, Jay Gruden called another run that stretched outside. Offensive tackle Anthony Collins came in as the sixth offensive lineman, playing the tight end spot to Whitworth's left. Green-Ellis picked up seven yards on the play, setting up an eventual third and one that the Bengals would convert, sustaining a drive that would lead to a touchdown. 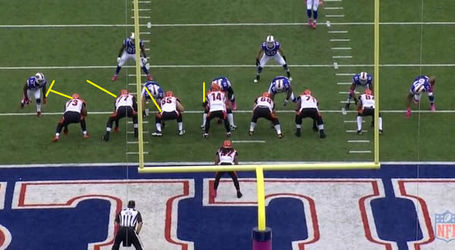 Two players make this seven-yard run happen. Like the play listed before this one, a defensive lineman is lined up outside of Boling's shoulder, closer to the point of attack that Green-Ellis would eventually use. With a little help from Kyle Williams' inside gap assignment, Boling took an outside step and sealed Williams, along with most of the defensive line, inside. As a side note, Boling threw Williams to the ground. 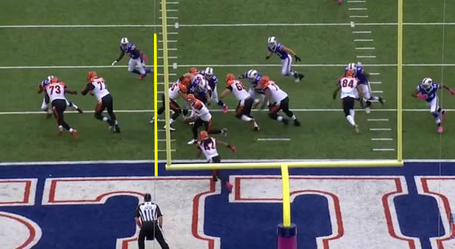 The other player was Whitworth, who wiped out two players on his own. 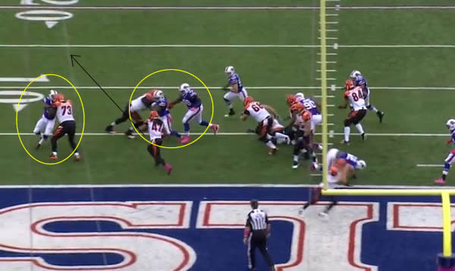 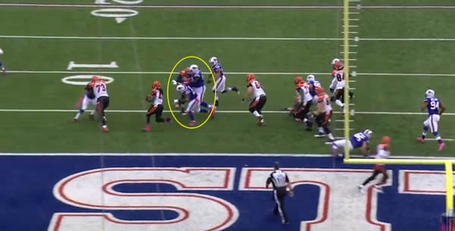 Later in the second quarter with 3:28 remaining, the Bengals have first down at their own 27-yard line. The Bengals use off-set I with Eifert back in as the de facto fullback and the team overloading the right side with Andrew Whitworth on Andre Smith's outside shoulder. 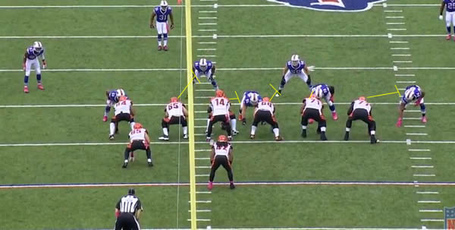 Two interpretations could be made about this play. Either it was designed to go right and that Green-Ellis was forced to cut-back. Or that it was a designed cut-back, considering that massive hole that opened, again thanks to Boling and Kyle Cook. 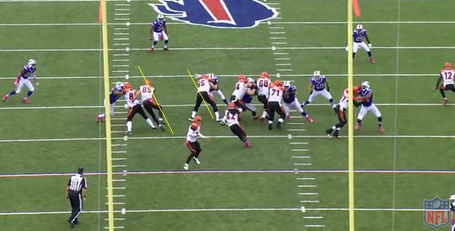 Eight yard gain. Now it should have made or an easy conversion, leaving two downs to pick up two yards that would pick up the eventual first. It was... easy. On the following play, the Bengals use the standard duel-tight formation with Eifert at left-TE and Gresham at right-TE. 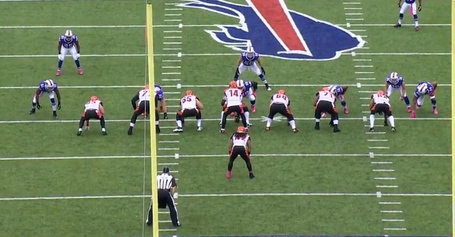 And like the previous play, we're not sure if it was by design, but the cutback lane was significant enough to give Green-Ellis room for a 25-yard gain, moving Cincinnati to the Bills 40-yard line. The key block? Andre Smith, who nailed a back-side block that could have resulted in a no-gain.

With 12:22 remaining in the third quarter, the Bengals called a draw, allowing the offensive line to significantly push the defensive while Buffalo's linebackers sat on their heels deciding if it's a run or pass. Boling and Cook get the greatest push while Andrew Whitworth stalled Jerry Hughes attempted power rush to close the lane. 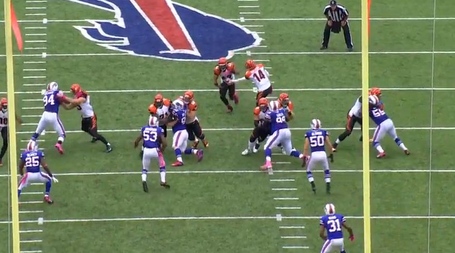 Naturally a running back would attack the wide-open lane before him. Almost with natural instincts, maybe even aware that linebackers Kiko Alonso and Nigel Bradham are free, Green-Ellis hesitates and then makes eye contact with Alonso [NOTE: Bradham stayed long enough for Andre Smith to neutralize]. 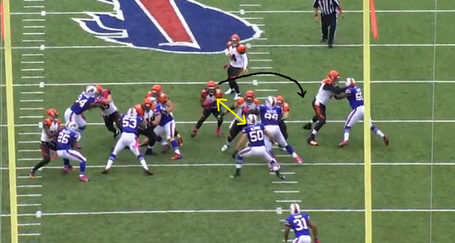 Green-Ellis hops to his left and outpaces Alonso for the seven-yard gain. 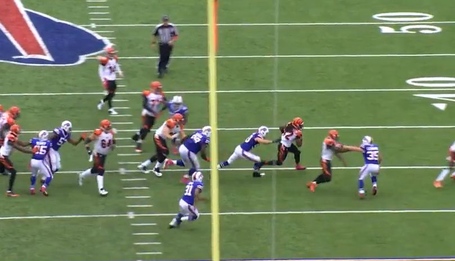 Not every run will be successful and there are some arguments that Cincinnati should use runs like this during the milk-clocking sessions late in the game. Because when the runs are designed to go outside of the guards, they're successful.

Either way, the running game is starting to pose a significant threat or opposing defenses.