Film Room: The Stunts are Coming

Detroit brings a four-man rush more than any other team in the league, but they get pressure with that four-man front regularly. The Bengals have one of the best pass blocking lines in the league. How will the Lions attack the Bengals in the trenches?

Share All sharing options for: Film Room: The Stunts are Coming

When the Lions play the Bengals, I entertain mental images of lions and tigers going to war. Big cats are probably my favorite group of animals - I mean, just look at them. They're agile, powerful, fast, and brutal. All attributes we love to see in our favorite football players, and attributes that will need to be on display in the trenches this weekend in Detroit.

The Lions blitz just 13.1% of the time on passing plays according to Pro Football Focus. The Bengals don't blitz much, but their 26.2% blitz rate on passing plays is double that of the Lions. Yet, Detroit grades out seventh in PFF's pass rushing grade, and while their 12 sacks ranks just 26th in the league, they've disrupted another 112 passes via hits or hurries. Their top pass rusher, of course, is Ndamukong Suh, infamous in these parts for tearing off Andy Dalton's helmet in Dalton's first NFL action ever. How do the Lions work their four man rush? The title is a dead giveaway, so let's take a look at a few plays Detroit's line has disrupted.

The Lions are Creative with their Front Four

Against Cleveland last week, Suh lined up at left end five times as Detroit flipped their defensive tackles and defensive ends. The stunt in question comes on the left side of the defense, where Suh and Ezekiel Ansah are matched up with Mitchell Schwartz and Shawn Lauvao. 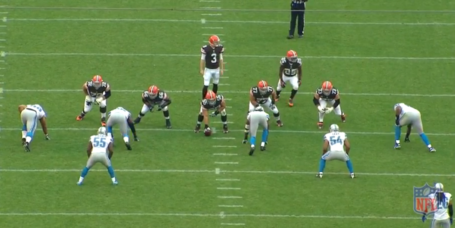 Ansah attacked Lauvao's outside shoulder to move him out of the middle of the field on the strong side of the play, while Suh will wait for Ansah to clear out and attack the inside of Schwartz. On the right side, Willy Young engages John Greco, drawing Alex Mack's attention since the initial rush on the left side of the defense goes outside. Nick Fairley is engaged with Joe Thomas. 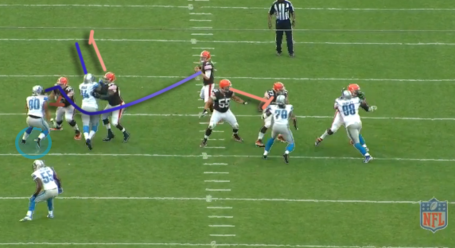 Detroit is running something described by Football Outsiders' Mike Tanier in this 2005 piece as a "Jet" stunt. Definitely worth the read as it describes defensive line play in great detail. Here's the excerpt on the "Jet":

That's exactly what's happening, but it's on the strong side of the defense rather than weak side (3 receivers on the right side of the offense, wider side of the field). Schwartz is left lunging with no inside help when Suh breaks off toward the inside. 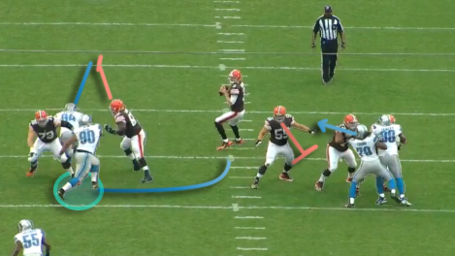 Suh is practically on Weeden by the time Schwartz realizes what's happened to him, and Mack is in no position to help as he's shielding off Young. With no halfback to help in this empty backfield set for Cleveland, Weeden has to hurry his throw over the middle of the field, where Stephen Tulloch helps make sure it's incomplete. 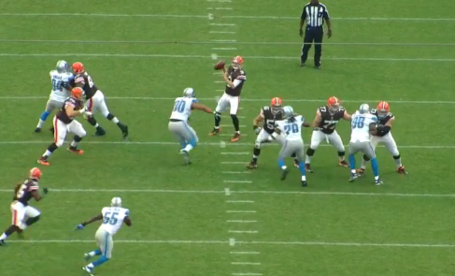 The next time Suh lined up outside, the Lions worked to get him one-on-one with Schwartz. I don't think this will be as effective against Andre Smith, who tends to struggle more with crafty quick guys than with power guys like Suh, but it forced an interception on this play. Chris Ogbonnaya releases into a wheel route, and with Young crashing inside and Mack helping on Ansah, Lauvao has to slide left. That will leave Suh one-on-one. 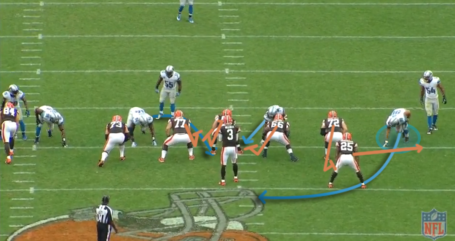 The result isn't pretty, and this is why I'm a bit wary of the Bengals trying to block the Lions with five guys too often. Yes, Andy Dalton gets rid of the ball on time much better than Brandon Weeden, and Smith is better than Schwartz at right tackle, but the Lions find ways to get Suh one-on-one matchups. On this occasion, Suh works up a head of steam and will just bullrush Schwartz and push the tackle past his quarterback as Weeden tries to step into a throw.

The end result is Suh in Weeden's face and forces Weeden to throw awkwardly as he discards Schwartz eight yards into the backfield. Weeden's pass was grossly off target and intercepted by linebacker DeAndre Levy, who had excellent coverage on Ogbonnaya on a wheel route.

The Bengals saw something similar against the Bills last weekend and need to make sure that they're operating more cohesively against a more active pass rushing front. First, there's reason for optimism. Football Outsiders' Ben Muth has been following the Bengals OL this year, and in his preview piece wrote about how cohesive the OL is as a zone pass blocking unit. As with the first Detroit stunt I looked at, Muth breaks down an instance where Smith and Kevin Zeitler effectively handle a stunt in a man blocking scheme. Check out that article (and this one for a breakdown on a few zone runs against Pittsburgh) for photos and a deeper explanation, but here's a sneak peek:

Smith sees the stunt develop first, because his man is the looper. Zeitler's man is just rushing straight up the field, which isn't an indication of a stunt at all, so it's up to Smith to drive the action here.

When Smith sees his man begin to loop inside, he brings his arm into a flipper and prepares to bang into the guard and defensive tackle to physically knock Zeitler off his man and inside towards the looper. This is a great way to both blunt the penetration from the rusher and redirect your guard's momentum where it needs to go.

Against Buffalo, that didn't quite happen on a delayed blitz play in overtime, slightly different than a stunt. But it had the same impact, taking Andre Smith out of the play and giving Marcel Dareus a shot at the QB. Dalton had time to pump and check his downfield read before the pressure got there, so it's a bit of a coverage sack, but Jermaine Gresham was wide open as Dalton's third read that he didn't get to.

The OL and Dalton's first move is to their left, the defense's right. Jamaal Westerman, circled, is going to work over the middle of the formation while Dareus tries to split a double team from Zeitler and Smith. On the right side, Jerry Hughes is going wide and Kyle Williams will take Boling upfield. Cook isn't engaged immediately. Kiko Alonso follows BenJarvus Green-Ellis across the formation in coverage, but BJGE doesn't release.

Dareus is effectively walled off - for now - and Westerman, obscured by the field goal post, is slowly creeping toward the hole opening up in the middle of the offensive line as Cook bails out to help on Kyle Williams. Dalton just pumped on a fake screen to AJ Green, and is about to move on to his primary read, which is Marvin Jones on a post.

Here's what's going on downfield. Buffalo apparently forgot to install HD cameras for the sideline All 22 angle, but that's Jones well covered on a post with two safeties deep, Mohamed Sanu maybe a little open on a go route outside the numbers, A.J. Green chillin' as a decoy, and Jermaine Gresham just super open on a quick slant. Dalton is looking at Jones, but the safeties stayed at home. His next read is hypothetically Gresham.

Dalton decides he can't throw to Jones, but as Westerman comes across the formation he draws Zeitler's attention. Unfortunately, Smith has already passed Dareus off to Zeitler on the inside as the defensive tackle slants inside. Zeitler will have to leave Dareus, thinking he has help to his right, and prevent Westerman from a clean shot at Dalton. 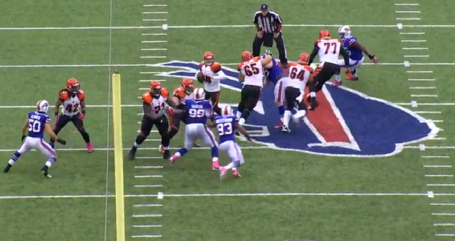 As Zeitler picks up Westerman, Dareus slips between the vacated space and Andre Smith and Dalton's eyes drop. He can't avoid Dareus and Smith is left as a spectator. 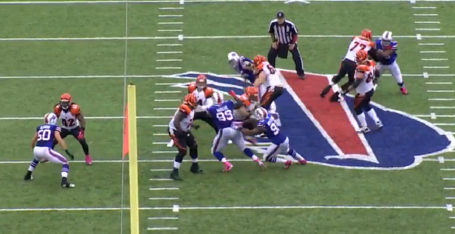 Gresham was wide open, but I don't know if Dalton has time to read the weak side. Dareus and Westerman confused the right side linemen in a two-on-two situation well enough to get a sack in a crucial spot in overtime to force a 3rd-and-very-long and eventually a punt before the offense couldn't move the ball on their sole OT possession.

The Bengals are clearly capable of handling different stunts and delayed blitzes. They've kept Dalton upright for most of the season. Josh tweeted yesterday that six of the sacks the Bengals have endured were unblocked, suggesting that there are some issues setting protections. But considering that they've only allowed 14 total sacks, that means they're pretty good when they get the right call in up front. PFF only has five sacks attributed to blocking failures, which could be accounting for some coverage "cleanup" sacks as well as unblocked sacks.

The point is, the offensive line is really good at pass blocking when they've got the right protections called. That will still be a challenge with the creativity that Detroit uses with its front four to set up one-on-ones for their best rushers, but the Bengals seem equipped to handle it.

Jake Liscow is a contributor for Pro Football Focus, as well as a long-time contributor at Cincy Jungle. You can follow him on Twitter @Jake_NFL.