Bengals quarterback is having a historic run (in terms of franchise history) in the last three games. If you're wondering how, look no further than distribution with everyone not named A.J. Green.

Generally speaking, when accounting for a player's "trend", the logical method is to multiply every player's numbers to get a sense on how they're going to finish their respective seasons. Considering that the Bengals have played eight games, we'll just need to multiply their current numbers by two. Math rules. That's of course, expecting identical results from previous games, such as Marvin Jones' four touchdowns against the New York Jets, or Andy Dalton's struggles against the Cleveland Browns.

Things happen in specific games that make those moments unique. So multiplying someone's statistics by two doesn't really make for a probable projection -- though we do it all of the time. So I started thinking: How could we weigh Dalton's three-game stretch, averaging 344.7 yards passing and a combined 11 touchdowns (which is the most during a three-game stretch in franchise history), and factor that trend over the course of the season.

So we split up Dalton's performances:

Asking him to, or any quarterback in the NFL, to sustain the type of production that he's turned over the past three games would be ridiculous. So if someone smarter than I can discover a formula that weighs his recent production for a greater projection without completing disregarding the first five games, by all means.

Regardless, Dalton is playing lights out currently ranked fourth in the NFL with 2,249 yards passing and tied for fourth with 16 touchdowns thrown.

He's doing it with an impressive distribution recently and laying off the attention he's been giving A.J. Green.

Through the first four games in 2013, Dalton targeted A.J. Green on 34 percent of his throws. During Cincinnati's four-game winning streak, Dalton has relied less on Green by targeting him 26 percent of the time; a number that drops to 25 percent during Dalton's impressive run over the last three games (Jones and Green have an equal number of receptions over that span).

If you're thinking that Green's production has fallen off without being the object of Dalton's affections, think again.

And now he's become a greater threat by default.

With under a minute remaining in the first quarter, Dalton fakes the handoff to Giovani Bernard, drawing the linebackers and even forcing safety Antonio Allen to lean forward. 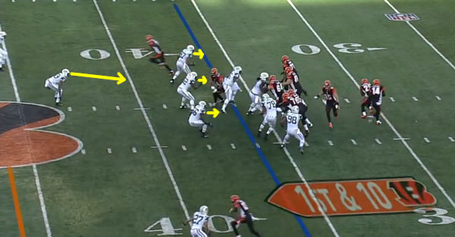 This little ol' play-action opens the inside of Green's go-route giving the receiver room towards the middle of the field and allowing Green to box out cornerback Antonio Cromartie to maintain inside position.

This is good recognition by Dalton and knowledge of his play-makers, knowing his receiver's speed would quickly neutralize the trailing safety with enough body control to box out Cromartie, who had good coverage, just on the wrong side of Green's body shield.

With under three minutes remaining in the third quarter, Green and Dalton hooked up with another 53-yarder. Green his special move called "being way faster than you, chump", on the deep post. Once Green accelerated into a full-blow sprint, Cromartie and defensive back Kyle Wilson were dust. 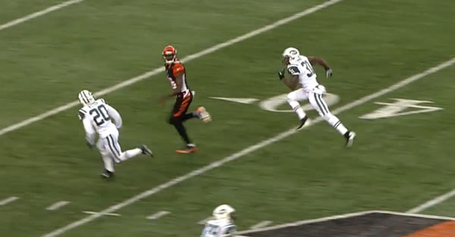 In the meantime, Dalton's other options are saturating the field with great routes that's consuming other defenders.

The pass distribution over the past three games:

Marvin Jones, along with his four touchdowns, caught eight passes against the Jets. With under six minutes remaining in the first, Dalton and Jones were playing pitch and catch while the Jets defense kept the middle of the field wide open; they dropped linebackers, but to no affect. 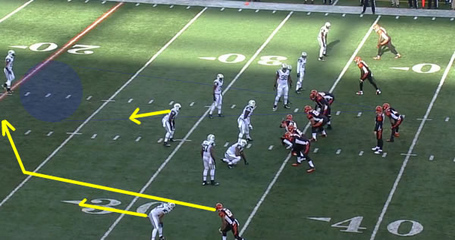 Jones hauls in the pass, picking up 30 yards (five yards with the defense clinging to his body) to the Jets four-yard line. Two plays later, Dalton had one of his most impressive thought-processes of the game. Cincinnati had a bunch formation with Jermaine Gresham, Tyler Eifert and Marvin Jones to the left. Gresham, just outside of Andrew Whitworth's shoulder, slides into the endzone and then breaks to his left.

Safety Antonio Allen can make or break this route, depending on his reaction.

If he stays with Gresham, he has superior position between Gresham and the quarterback. Instead Allen moves up to cover Eifert while Gresham is running free at the back of the endzone.

Just like Sanu's 24-yard reception over rookie Dee Milner, which was the result of a perfect pass.

Now let's be clear that the Jets secondary has concerns. This isn't to take away from the Bengals passing offense against New York, largely because the sample size spans three games. Cincinnati exposed it using a collection of sideline routes in man-coverage and inside routes where the middle of the field was wide open all afternoon.

That being said, this passing offense is proving to everyone that they're growing up, becoming a cohesive unit from Dalton, his second-year receivers in Jones and Sanu, arguably the best tight end duo in the NFL in Gresham and Eifert and Giovani Bernard, who is thirsting to break one. If the Bengals go to the Super Bowl this year, and considering how good Cincinnati's defense is, their offense will make it happen without much difficulty.