Next Man Up: Brandon Thompson will impress you

The Cincinnati Bengals have been applying a next-man up philosophy after losing a handful of players in the past month. Brandon Thompson is one of those guys that figures to step up.

Share All sharing options for: Next Man Up: Brandon Thompson will impress you

There's no question that replacing Geno Atkins just isn't possible. Not only is he one of Cincinnati's top defensive players that already stands among the legendary artists in franchise history, Atkins is the premiere defensive tackle in the NFL. Relentless against the run, fluid in his pass rushes, Atkins is the type of player that could be defined as one-of-a-kind that shows up every generation to redefine the position. Perhaps overstated, but I don't believe so. Unfortunately, Cincinnati lost their greatest component that's made them a perennial top-ten defense.

Now they're facing a crossroads.

They've lost another top defender in Leon Hall two weeks ago and one of the team's best roll players in Taylor Mays last week against the Jets. In the meantime, Cincinnati's opponents aren't going to care about any of this. Cincinnati still has to play the games, win the division, and claim at least one playoff win. Those were the expectations in training camp; those are the expectations today.

The Bengals figure to address defensive tackle in free agency; not to replace Atkins' production (that won't happen) or his snaps. But to rebuild the team's defensive tackle depth that's taken a significant uppercut in the past month when we include Devon Still's elbow injury. Don't expect starter-level quality though; players are a free agent in week nine for a reason.

That being said, second-year defensive tackle Brandon Thompson, the only healthy defensive tackle aside from Domata Peko, is good. From the film that I've watched this year, I've noted that he's quick off the line of scrimmage with a beautiful impact shot that has forced blockers to lose their balance. His acceleration is good and he has enough quickness and speed to rush around a blocker and drop someone like Geno Smith from behind.

This isn't a declaration that Thompson will replace Atkins' production; but there's logic to the next man up philosophy. Thompson isn't just a roster body to help rotation and give the starters rest. This kid has developmental promise, which has already lead to an impact this year.

One of my favorite plays against the Miami Dolphins on Thursday happened in overtime. With 7:44 remaining, the Dolphins have third and one from the Bengals 39-yard line. Convert this and the drive is sustained, giving the erratic Caleb Sturgis an opportunity to convert the game-winner.

Running back Daniel Thomas gets the handoff and targets a collection of bodies at the point of attack. Thompson splits the double-team and holds both blockers in the region, wiping out Thomas' window. 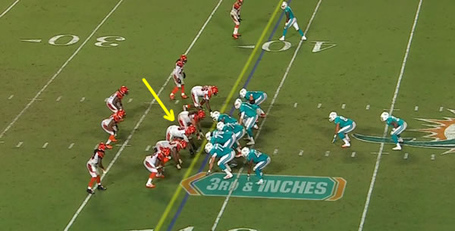 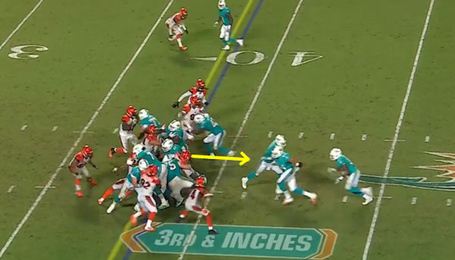 Adam Jones held the edge, further reducing Thomas' window and forcing the running back to target the only lane remaining; the one where James Harrison was waiting to drop the running back for the one-yard loss. The Dolphins were forced to punt and it all started because of this man. 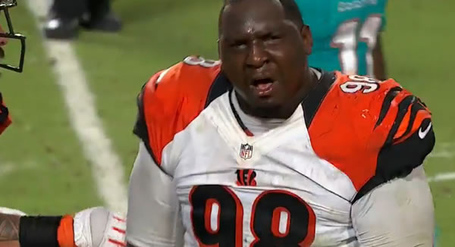 Being that he's primarily played as a backup player to give the starting defensive tackles rest, he hasn't received the attention. But he's been doing this all year.

Last week against the Jets, with 13:04 remaining in the fourth, Thompson powerfully pops the right guard and then sheds the block to drop Bilal Powell for a limited one-yard gain. 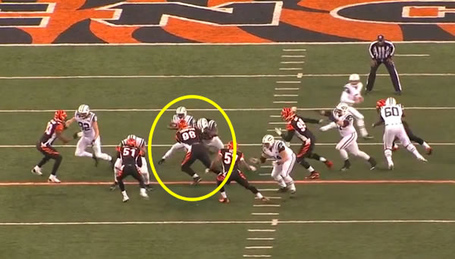 Earlier in the game against New York, the Jets were moving forward, reaching the Bengals 23-yard line with 5:36 remaining in the third. Thompson played a one-technique inside the right guard, then used impressive speed and artistic hand-wrestling to wrap around the blocker and drop Geno Smith for a nine-yard loss on the sack.

Against Cleveland in week four, the Browns have first and goal from the Bengals one-yard line in the first quarter. Thompson lines up between the left guard John Greco and Pro Bowler Joe Thomas. Greco pulls to the left and Thomas blocks down.

From the recollection of my high school lessons playing the sport, Thompson's key is following Greco's pulling block while obviously avoiding Thomas' down-block. Using an impressive burst out of his stance, Thompson wraps around Thomas and avoids the impact from the Pro Bowl left tackle. 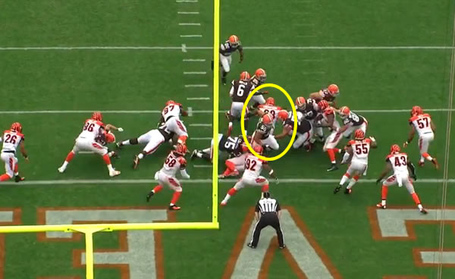 As the lead-blocker continues towards the point of attack, Thompson arrives from behind to wrap Willie McGahee for a one-yard loss. Unfortunately Brian Hoyer would complete the two-yard touchdown throw on the next play, giving Cleveland a 7-0 lead.

Thompson's development will continue and in theory, he'll only get better. Along with the attributes on the field, Thompson has a nasty motor. Playing every game this year, he's already generated 1.5 quarterback sacks and 16 tackles. Yet that's only a portion of his effectiveness; much like Domata Peko, he's a space-eater, generating roadblocks at the line of scrimmage, allowing linebackers to roam free because the offensive line is too preoccupied to reach them.

Don't feel too frustrated about the team losing Atkins. It is what it is. A loss. Yet Friday's sun rose and the countdown for Cincinnati's next game started. Cincinnati drafted for contingencies like this and they have a good one in Brandon Thompson. Is he Atkins 2.0? Of course not. Will he do his part to ensure that losing Atkins won't pose such a pessimstic decline? He very well could.