Geno Atkins may be done for the year, but a big reason the Bengals have been successful in run defense is because Michael Johnson and Carlos Dunlap so rarely let runs bounce outside.

We've written and wrung hands about Geno Atkins' season-ending injury a lot since Thursday night, and rightfully so. But, there's a lot of football left to play in the 2013 season, and the Bengals defense has two healthy defensive ends who are on the top of the team's run defense game. These guys just win at the point of attack - pretty consistently - and create highlights in the running game. Two plays from the Miami game exemplify what Bengals fans are used to seeing when teams try to run the ball on the edges.

The defensive highlight of the game was Carlos Dunlap's massive effort to chase Dolphins running back Lamar Miller 41 yards down the field on a toss play that saw a few missed tackles much closer to the line of scrimmage. The run went to Dunlap's side and was ultimately "successful" until the fumble, but that wasn't Dunlap's fault. The play has center Mike Pouncey and right guard John Jerry pulling, with tight end Michael Egnew initially responsible to block the right end, Dunlap. If Egnew wins against Dunlap, Jerry and Pouncey are free to block the Bengals linebackers in pursuit, as is the play's design. 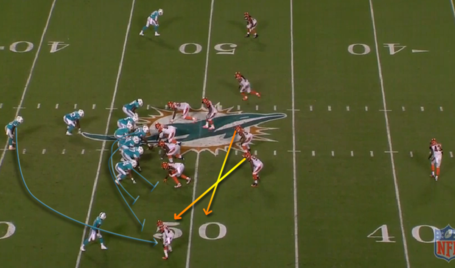 But Dunlap wins against Egnew. Instead of following the dashed yellow line to try and get a second-level block on Vincent Rey, Pouncey notices that Dunlap has inside leverage and comes down to chip. Jones (74) is uninhibited to chase down Vontaze Burfict, but Rey is free from the mess in front of him. 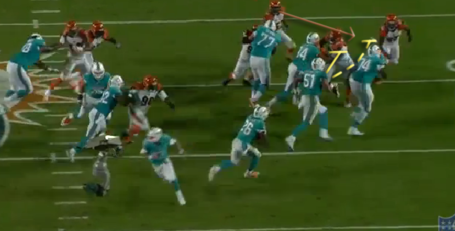 After knocking Dunlap back and out of the play for now, Pouncey is looking at Rey's numbers, while Newman effectively sets the edge (though the sideline is right behind him). Miller tries to pick up whatever yards he can by turning upfield, where Rey's angle and proximity suggest that he should be able to stop the play for a minimal gain. 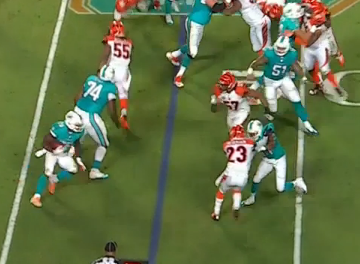 Instead, Dunlap bails the Bengals out with a beautiful hustle-and-strip play, 41 yards later. 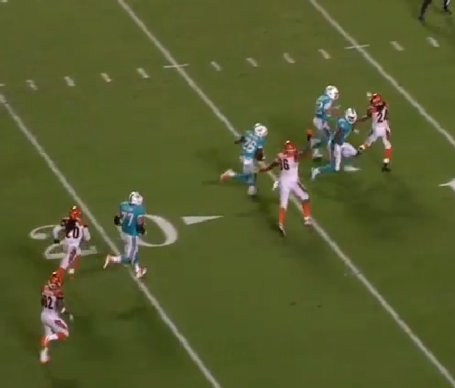 Here's what happened at the point of attack - watch Pouncey, Rey, and Dunlap.

With a lengthy break, the Bengals defense was finally back on the field late in the third quarter. The Dolphins immediately went back to the running well that had served them well in the first half. It's a weak side power play off of left tackle Bryant McKinnie, whose responsibility is to knock Michael Johnson off of the point of attack. Egnew is the lead blocker, responsible to pick up a linebacker in pursuit outside. 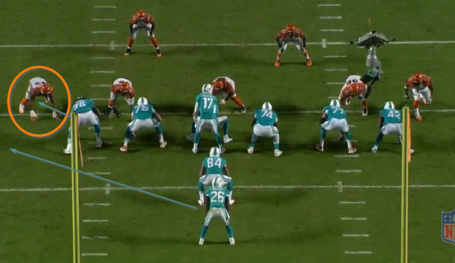 Even before the ball is handed off, Johnson has the step on McKinnie. He's under his pads and pushing the left tackle backwards just as Ryan Tannehill to deliver the handoff. Dunlap and Harrison are backside contain, as Rey is responsible for the cutback lane in the middle of the field. Vontaze Burfict is headed outside and is presumably Egnew's assignment. 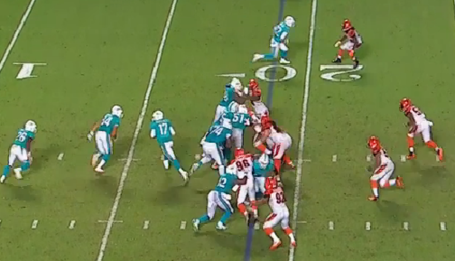 But Johnson, circled, has already blown up the point of attack. He's stood up McKinnie and, with outside leverage, is about to knock McKinnie backwards and force Egnew to engage him momentarily before bouncing out to block Burfict in pursuit. 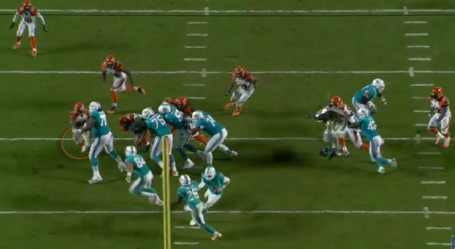 It's kind of amazing how far Johnson drives McKinnie back in a flash after gaining leverage. Miller is forced to run along the 15 while he chases the corner (which isn't open either - as to be expected if a run is pushed this far outside). The white hat on Johnson at this point is Egnew, who either immediately disengaged him to block Burfict, or Johson shoved out of the way (there's a GIF coming, you be the judge). 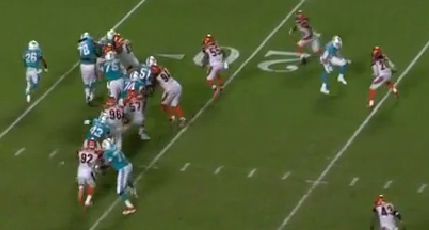 Johnson makes the hit as Miller cuts his losses and turns up field, and drives Miller into the ground behind the line of scrimmage with some help from his friends. Notice that McKinnie is behind the 15 as a spectator. 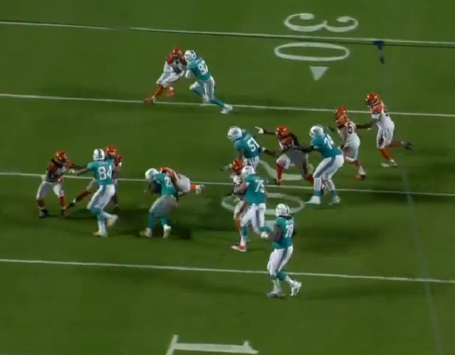 Here's the GIF from the endzone angle. All you need to watch here is Michael Johnson, lined up outside of McKinnie on the offense's left side.