Questioning coaching staff or the players

One comment in a FanPost asked about the final three plays against the Dolphins, so we broke those plays down.

Share All sharing options for: Questioning coaching staff or the players

While attempting to avoid the usual defense of Cincy Jungle's stories and perspectives in a FanPost that appeared more therapeutic for the community, one questioned our avoidance of blaming the coaching staff, citing the team's three consecutive passes called at the end of the game. Granted, I come from the school where players are the ones that execute the plays but there are times when the coaching staff deserves their share of criticism -- like the play-calling at the end of the first half against Chicago.

The comment asked why we didn't point out the team's final three plays from Cincinnati's eight-yard line that resulted in the Bengals loss in overtime against the Dolphins. Yes, yes. Why talk about a game nine days old with the Ravens on tap Sunday? That's what we're going to do here, so click away if you're looking forward instead of behind.

Why did the Bengals pass three straight times during the final series of overtime against Miami? By this point in the game, Giovani Bernard had left with a rib injury and BenJarvus Green-Ellis had only gained four yards on three carries in overtime. Overtime scenarios are tricky and the Bengals couldn't risk conceding the possession just because they were inside their own ten -- otherwise you flip the field for Miami, who only needs one or two plays to get into position for a game-winning field goal. Those are the thoughts while the game is happening, not nine days afterward.

But is that the fault of the coaching staff or the offensive line that didn't protect Andy Dalton? Maybe more credit should be given to Miami?

On first down from the Bengals eight-yard line with under seven minutes remaining in overtime, Dalton is in shotgun with the Dolphins rushing six -- including both inside linebackers, who ran an "X stunt". With Cedric Peerman and Jermaine Gresham heading off into their routes, the Bengals lost the numbers game with more rushers than protectors. As a result, Philip Wheeler had a free shot on Dalton. 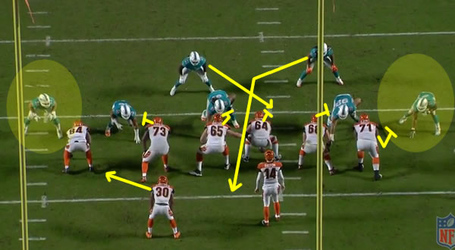 Dalton, with Wheeler approaching from the middle, stepped back and released the football. There were options, including Green's hook route five yards off the line of scrimmage. Did he quit the route? Did Dalton think Green was continuing on a square-in route instead of the curl? Did Green think it was going to Jermaine Gresham? Or was the throw just un-catchable with Dalton trying to get rid of the football? 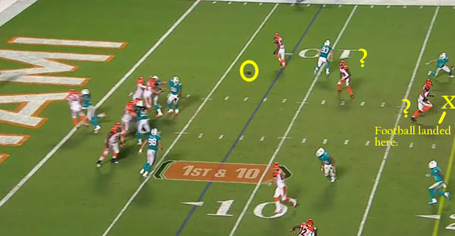 The basic issue here is that the play being called only kept five in for protection against the Dolphins six-man blitz. Normally that's a recipe for a big play, but it's a huge risk from inside your own ten yard-line.

One second down, the Bengals called a six-man protection (keeping Peerman in) while the Dolphins had single-coverage on the outside receivers. 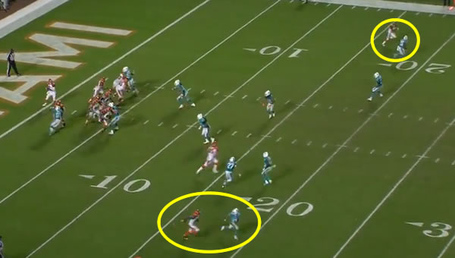 If Green is single-coverage on a go-route, that's your target. There's no debate there. Plus, Dalton didn't have another option -- Tyler Eifert and Jermaine Gresham were covered underneath and Green is the best option on this team in single-coverage.

Yet, Green tripped (or got his feet tangled) on the route and fell down.

This setup a third down and ten from the eight-yard line. Miami overloaded a blitz on Cincinnati's right side, but the Bengals accounted for that and initially the pass protection was good with the scheme perfectly countering Miami's blitz. 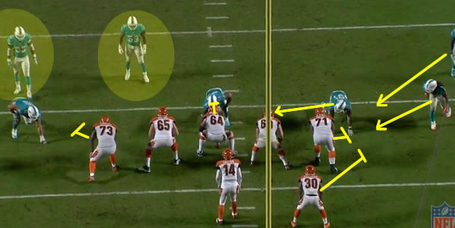 Unfortunately, Cameron Wake beat Kevin Zeitler and recorded the game-winning sack that gave Miami the 22-20 win. Should Zeitler's defeat be blamed on the coaching staff? The scheme worked and the blitz was neutralized. When players don't execute the plays, the coaching staff can receive only so much criticism.