Bengals cornerback Dre Kikpatrick only played two defensive snaps against the San Diego Chargers on Sunday, but he finished the game as the developing prospect that was expected of him since being drafted No. 17 overall during the 2012 NFL draft. After injuries wiped out his rookie season (only played five games), the second-year cornerback started from scratch this year which has required him to earn every bit of his playing time.

And finally, Kirkpatrick has produced positive momentum; a memorable moment outside of the deflating preseason performance against Dallas' Dez Bryant, or the 74-yard touchdown reception by Cleveland's Josh Gordon, where his coverage was good but momentarily hesitated fearing a defensive pass interference.

With 7:14 remaining in the third quarter, the game tied at seven, San Diego has third and six from the Bengals 30-yard line. The Bengals are playing man coverage with Kirkpatrick compressed at the line of scrimmage, near tight end Antonio Gates. 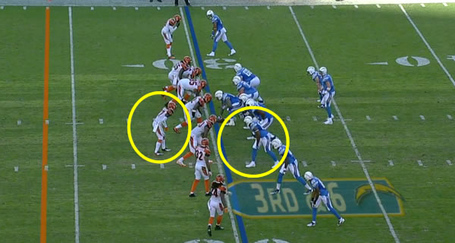 Gates ran 1-2 yards off the line of scrimmage and cut in. 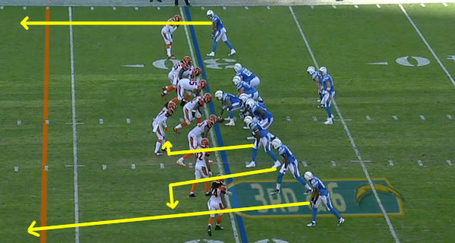 Kirkpatrick's coverage was good. Even though a yard separated Gates and the second-year cornerback, a completion would led to a short gain, but prevented a first down and forcing a 45-yard-plus field goal attempt. Considering that the game was low-scoring, it would have been a big score for San Diego. 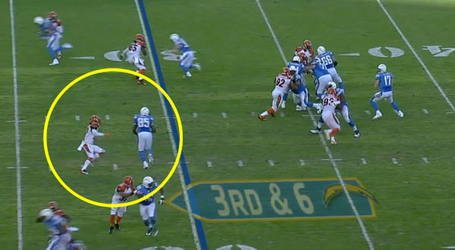 So Rivers logically targeted Gates. After the "completion", Kirkpatrick immediately attacked Gates' arm that was holding onto the football.

"Mike (Michael Johnson) was kind of in between us so it was hard for me to get my hands on him. As he broke under, I knew (Rivers) was going to him, so I just tried to get my hand in there," Kirkpatrick said via the Cincinnati Enquirer.

The interception was important for three reasons: One, it's freaking turnover. Two, it held San Diego scoreless during a scoring opportunity. And three, the offense responded with a 10-play drive and 21-yard touchdown reception by A.J. Green to take a 14-7 lead.

"I was very emotional after the game," Kirkpatrick said, explaining why he quickly left the lockerroom after the game. "I just had to sit back and soak it all in. I didn't want to talk about it," Kirkpatrick said via the Cincinnati Enquirer. "It was nothing but another play. But to me, I haven't made a play like that in three years."

The only other defensive snap that Kirkpatrick was on the field for was at the 1:07 mark in the second quarter. San Diego had third and 14 from the Bengals 49-yard line. Cincinnati actually played a 3-2-6 (three down linemen, two linebackers and six defensive backs) with Kirkpatrick playing deep, deep, deep. Rivers checked down to Danny Woodhead but Wallace Gilberry batted down the pass at the line of scrimmage.

While Kirkpatrick had a good play on defense, he was exceptional on special teams, as a gunner during Kevin Huber's punts on Sunday.

With 8:19 remaining in the first quarter, Huber crushed a 75-yard punt that nearly rolled into the endzone. Kirkpatrick sprinted downfield -- easily blowing beyond his guy -- and tapping the football back into the field of play for Jayson DiManche to down it at the four-yard line.

With 10:09 remaining in the second quarter, Huber crushed a 56-yarder to San Diego's 31-yard line. Kirkpatrick, as the gunner, beat Crezdon Butler. Instead of allowing him a free shot on the punt returner, Keenan Allen, Butler held Kirkpatrick.

The ten-yard penalty pushed San Diego to their own 21-yard line, essentially helping the Bengals flip the field -- all because Kirkpatrick beat his guy.

And with 11:16 remaining in the game, Kirkpatrick approached Allen, on Huber's 38-yarder to the Chargers 18-yard line, so quickly that he was forced to call for a fair-catch -- Butler blocking Kirkpatrick in the back went uncalled.

Head coach Marvin Lewis, who expects Kirkpatrick to eventually become a starter, has been impressed with his second-year cornerback this season.

"He just wants to be out there and playing every snap and doing well and proving to whoever – himself included – that he belongs and he just has to understand that he belongs and he’s just got to keep working," coach Marvin Lewis said. "We’ve been blessed to have this group of guys and to have the depth we have there and the fact that these guys aren’t giving up their spots. He’s having to earn every bit. When his time comes to be a full-time starting player in the NFL he will have earned it."

At this stage, it was the greatest game of his career but we suspect that more will come.