Taking a look at a handful of plays that made Andy Dalton successful against the San Diego Chargers... and equal number of plays that frustrated everyone.

NOTE: We're testing something new. Due to the needless (and personal) attacks in the comments directed at each other because of someone's opinion on Andy Dalton, we're going to give people an outlet. Each week we'll do a Good Andy, Bad Andy post and within that post, people are free to complain or praise Dalton until their heart gives out. You may counter someone's opinion in there, but be aware that these type of comments and postings are meant to be an outlet for everyone, but everyone must abide to community standards. Or how about common decency. Here's the caveat. This will be the ONLY place that this will be allowed to happen; we're going to be a little more reactive about comments regarding Dalton within posts that have nothing to do with the quarterback. If you want to know more about why this is happening, go here.

Here's the thing with most Bengals fans: Many of us are pretty uninterested in the Andy Dalton debate. Sure, there is the blind support that reminds me of religious zealotry and the preexisting hatred that feeds a need to hate (not everyone is like that obviously, but those groups exist). Despite never really having one position or the other (I just react), Twitter slams me for it. When I praise Dalton's tenacity to have a closer's mentality for forgetting bad plays and helping the team win, I get slammed as an apologist. When I rip Dalton for having a bad throw or an awful first half, I'm called a hater (because apparently I'm stuck in the 90s... who says hater anymore?). Literally, people call me both and in reality, I don't care. If Dalton helps the Bengals win, I'm happy. If his actions leads to a loss, I'm not. It's really not that complicated.

This week we're going to detail a handful of plays, breaking them down as good and bad plays. Our intention is navigate people's opinions on Dalton here and to leave other postings (that may not have much to do with Dalton at all) alone.

This is one of my favorite throws that we've seen from Dalton this season. It shows that when he worries less and just unloads, he can be a hell of a decision-maker with enough ability to zip-line a fastball through a small window on a quick slant.

The Bengals, with third and two from their own 18-yard line and 10:48 remaining in the fourth, have bunch formation on the left -- Andrew Hawkins (delayed slant), Jermaine Gresham (go-route) and A.J. Green (crossing pattern). Hawkins, who becomes the primary target, slightly delays his route with cornerback Johnny Patrick covering. 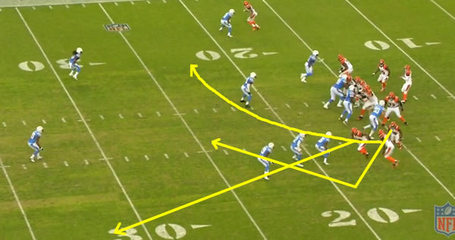 Hawkins jogged to the 20-yard marker while Andy Dalton systematically kept his eyes trained on A.J. Green. As a result, linebacker Donald Butler picked up A.J. Green, opening the middle of the field. As soon as Hawkins stomped his left foot on the 20-yard marker, he accelerated into Hawkins-like speed as Dalton flipped the football, just outside of Patrick's fully-extended arm. It was actually a well-designed play, highlighting Hawkins speed after lulling the defense asleep.

Had Marcus Gilchrist not played covered one (aka, center field), Hawkins' 50-yard gain turns into an 82-yard touchdown. But Dalton's throw was the type that should make anyone a believer.

His second quarter interception wasn't an issue of arm-strength as it was decision-making. Yes, arm strength could have helped the play work but why throw it in the first place? With 3:50 remaining in the first half from their own 35-yard line, Dalton fakes the handoff to Giovani Bernard and looks downfield.

Now the play that was called initially showed a two-man route -- everyone else stayed to protect. Mohamed Sanu ran a ten-yard hitch and A.J. Green ran a deep post/cross that took him from the left hashmark to the numbers on the right side of the field. Eventually Tyler Eifert, from the fullback position, ran towards the right sidelines but not until Dalton had targeted the most covered person on the field while an inside rusher was crashing into our pity-party. 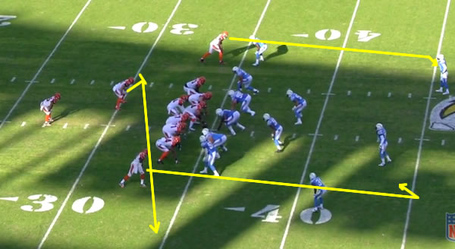 As he's throwing the football toward Green, Sanu has nearly five yards of freedom from every direction (and not to mention that Eifert didn't have anyone covering him).

Dalton unleashed the Hail Mary anyway, where Eric Weddle settled underneath for the interception. 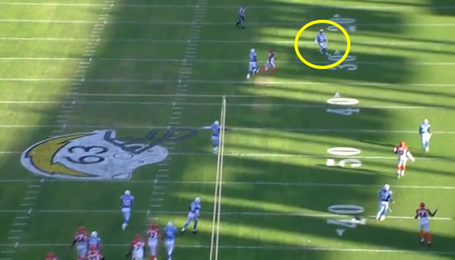 Sanu was open well before the pass rush got to Dalton and Eifert had nearly escaped undetected. These are the kind of throws that can test anyone's patience. Luckily, the Chargers wouldn't get any points out it.

After San Diego converted the 48-yard field goal to reduce Cincinnati's lead to within a touchdown, the Bengals took over at their own 34-yard line with 4:35 remaining. Traditionally, Cincinnati will do everything that they can to wipe out as much clock as possible to impact the opposition's opportunities. By "do everything", we really mean that they'll call a run between the tackles on every down -- nine-man fronts be damned!

Instead Cincinnati, with three-wide formation and Tyler Eifert as the widest receiver on the left, tricked everyone with a pass. Cornerback Shareece Wright was so convinced that the Bengals were going to run the football, that when A.J. Green took an inside step, Wright was bracing for the block. Tricksies, Bengalseses. Green jumped outside and ran vertical. Dalton, well aware of every step that Green takes, dropped the football in Green's hands with such perfection that his receiver didn't miss his stride.

The throw offered two projections. One, San Diego realized that the Bengals were going to throw it and laid off. Two, it moved Cincinnati to San Diego's 38-yard line, nearing Mike Nugent's field goal range that would have given Cincinnati a 10-point lead had BenJarvus Green-Ellis not kicked San Diego's heart out of their chest. He did. Bengals ate said heart, took knees and won.

Initially we had identified Dalton's pass to no-man's land that drew an intentional grounding as our second Bad Andy play. In reality, we're in no position to fault him on that. He was in the middle of a rush and it appears as if Dalton was expecting someone to be there. A bad route, or missed communication isn't necessarily all on the quarterback.

But for the love of god, don't hurt A.J. Green!

There's 8:25 remaining in the first quarter and the Bengals have third and seven from their own 21-yard line. Green and Marvin Jones ran double-posts -- Andrew Hawkins and Jermaine Gresham ran double outs. 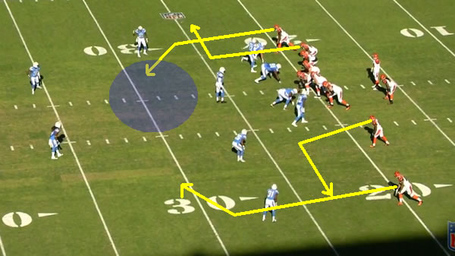 Green attempted to go after the horribly overthrown football and took a shot to the ribs for his troubles.

Looking at the play, Andrew Hawkins is wide open and it wouldn't be a stretch to suggest that he could avoid a tackler or two, gaining the first down. In reality, Dalton's throw had the correct angle but was thrown terribly high (normally the case early in games as he goes through the jitters). But without a doubt, the safety was zeroing in on the route and no matter where Dalton placed the football, Green was getting hit. 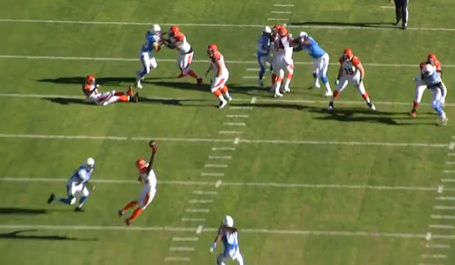 So back to Hawkins being open? 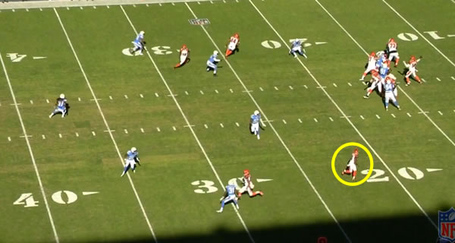