The Bengals offense was at their best against Dallas when the passes were quick and the running game was effective.

When the Bengals offense is at their best, the running game is effective and the passing game is efficient. And by efficient, we're not talking about bombs down the sidelines to the super-athletic-gumby of a receiver in A.J. Green. They're quick strikes, using short drops and sometimes limited one or two reads against the defense -- in most cases, Dalton's progression is usually decided before the snap.

Cincinnati's opening possession was a prime example of that.

After Brandon Tate returned Dallas' punt 11 yards to the Bengals 42-yard line, Cincinnati tried to establish the running game, pounding BenJarvus Green-Ellis on three of the team's opening four plays from scrimmage. Green-Ellis generated eight yards, including a third-and-two that he easily converted. But Dalton, presumably applying Jay Gruden's game plan, uses a series of short throws that gained easy yards and prevented those long-yardage situations that tend to get Cincinnati into trouble.

Despite the struggles that Cincinnati's first-team unit faced on Saturday, Dalton was an efficient thrower against Dallas, applying quick reads, drops, and throws. Such as A.J. Green's first reception of the preseason, a nine-yard grab with over 12 minutes remaining in the first quarter, was a skinny post over the middle. BenJarvus Green-Ellis was split wide right with an empty backfield. Green, Jermaine Gresham, and slot receiver Mohamed Sanu had short routes that required Dalton's timing and anticipation, but most importantly quick decision-making and a fast release of the football. The third-year quarterback threw as soon as Green broke his route. 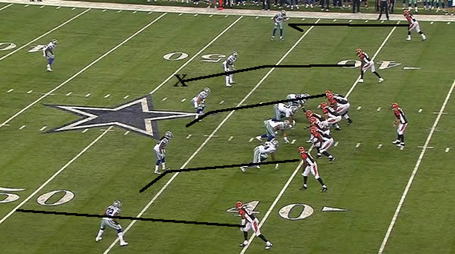 Several plays later the Bengals have second down from the Cowboys 41-yard line. Dalton fakes the handoff, flips around and immediately hits Gresham, who helped Andre Smith chip block and found open space three yards off the line of scrimmage. 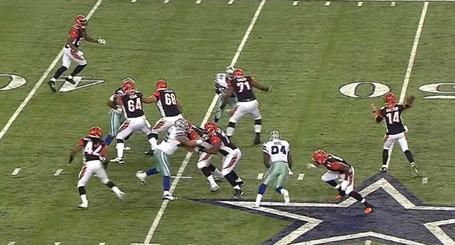 Gresham picked up 11 yards to the Cowboys 30-yard line. The Bengals followed that up with an I-formation, twins to the left (both receivers on one side). Dalton fired a quick pass to Mohamed Sanu on a bubble screen, picking up four yards. 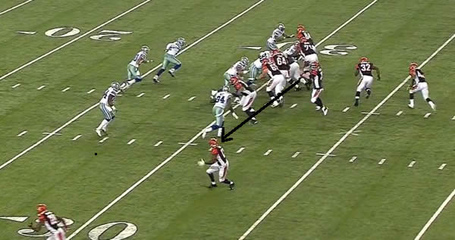 On the next play, Dalton is in shotgun with three receivers and Gresham in a two-point stance. Two seconds tick and the football is out of Dalton's hands, hitting A.J. Green's quick square-out for a seven-yard gain. 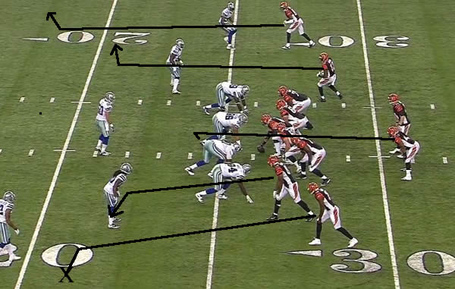 The Bengals have second and 18 from the Cowboys 27-yard line with 8:02 left in the first quarter. Jermaine Gresham is back to his customary three-point stance outside Anthony Collins' left shoulder. It's a quick curl route and the football is out of Dalton's hands by the third step in his drop. 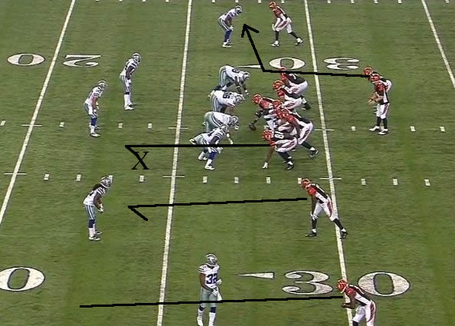 Cincinnati should have scored points on the possession, but Marvin Jones fought for yards after a reception, picking up 16 yards but fumbling at Dallas' four-yard line.

Perhaps it was the drive that opened the second half that emphasized Cincinnati's run effectiveness and pass efficiency. After Giovani Bernard pounded the football with 24 yards on the opening two plays, the Bengals have first down from the Cowboys 42-yard line. Dalton faked the handoff to the surging Bernard, who is making a habit of slipping through defenders as a down-hill runner, immediately hitting A.J. Green's slant. 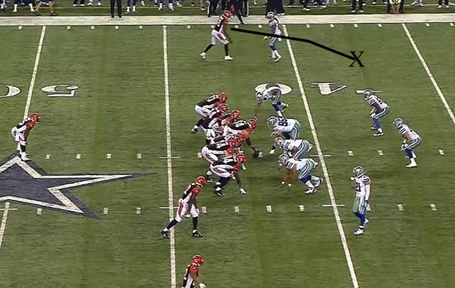 Green picks up 26 yards (thanks to his overall speed) and forcing the missed tackle from a unguided missile from safety. Dalton lobbed another pass two plays later to Green near the back right pylon, but the officials ruled that Green's right foot stepped out of bounds (his toe was in, but his heel hit the white). Dalton flipped a quick pass to Jermaine Gresham down the line of scrimmage, well short of the first-down marker. The Bengals convert the field goal and reduce Dallas' lead 14-10.

Obviously when assessing offenses in the NFL, the quicker the release on short drops, the more efficient you're going to be. It's even more realistic for Cincinnati's offense, which needs to apply quickness, even as an extension of the running game -- one of the more core aspects of a west coast offense.