Maualuga's role as a two-down linebacker helps the defense

We're keeping our eye on Rey Maualuga this preseason, seeing how much he has improved and how the Bengals intend to use him this season.

Share All sharing options for: Maualuga's role as a two-down linebacker helps the defense

Based on how the team addressed the so-called dress rehearsal on Saturday, it's clear that the Bengals intends to use their linebackers as we had expected. During base 4-3 alignments against two tight ends, or with one fullback on the field, Rey Maualuga will be flanked by two linebackers (James Harrison and Vontaze Burfict). When a third receiver comes on the field, or during obvious passing situations (such as third and 10 or longer), Maualuga and Harrison will come out while Emmanuel Lamur joins Burfict during nickel formation (four down, two linebackers, five defensive backs).

The bonus on this alignment is how Rey Maualuga, who signed a two-year deal during the offseason, would rebound from a disappointing showing last season against the pass. Let's face facts -- he generated over 150 tackles. As much blame that was assigned to him, Maualuga was making plays. But when Cincinnati used Maualuga in the passing game, it was a liability that was embarrassingly exposed against the Houston Texans last January.

With the athletic Lamur, the college free agent linebacker that the Bengals signed with Burfict last year, Cincinnati has the option of using him instead of Maualuga during passing situations, allowing the starting middle linebacker to do what he does best. Run blitz people into the turf.

With 6:43 remaining in the first quarter -- following Marvin Jones' fumble -- the Cowboys have second down from their own seven-yard line. Cincinnati shows 4-3 with Taylor Mays navigating into the box. Emmanuel Lamur, who started at SAM for the injured (or resting) James Harrison, shadows Jason Witten in motion, with Maualuga leaning to that side. As soon as the Cowboys snap the football, Maualuga identifies and attacks the target lane. 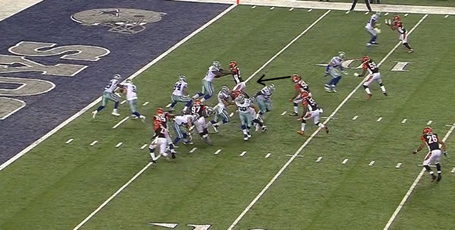 Tight end James Hanna pulls and wraps around, targeting Maualuga. Most linebackers are taught to take on the blocker, rather than work around them. Why? It clogs the lane and makes it harder for the back to generate momentum before another defender makes the stop. Working around someone actually helps the blocker create, if not enlarge, the lane for the running back. Not only does Maualuga take on Hanna, the collision knocks the tight end off balance, allowing Maualuga to swing DeMarco Murray around. 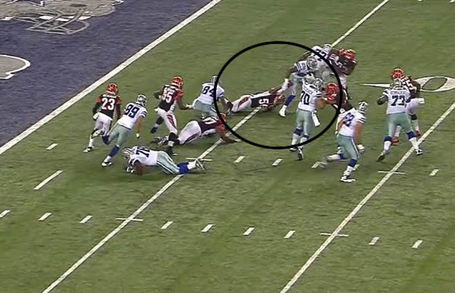 Though he doesn't get the tackle, Murray is forced to completely stop and reassess. While that happens, Wallace Gilberry recovers to strip the football from behind which Dallas would recover. Does Maualuga make the stop? No. Does he stop Murray from having any momentum that led to other defenders making the play? Yes. It's the little plays by this defense that accumulates into the whole.

Two plays later, we're watching an old school look at Maualuga. There is no hesitation. Just a dog finding the milk man, but instead of milk, it's a football. Alright, that was so beyond stupid that we're just going to look at the pretty picture below. 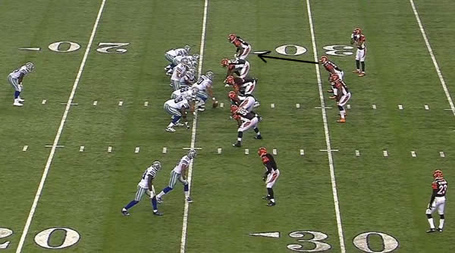 Again, as soon as the football is snapped, Maualuga leaves a trail of dust and broken shards of grass behind him. Obviously, it's a run blitz due to Maualuga's instant reaction, but he's assigned Murray's lane. Maualuga took on left guard Mackenzy Bernadeau with the initial hit. Does he concede the play and hope other defenders make the play? No. Maualuga literally shoved the guard aside to help Geno Atkins bring down Murray for a one-yard gain. 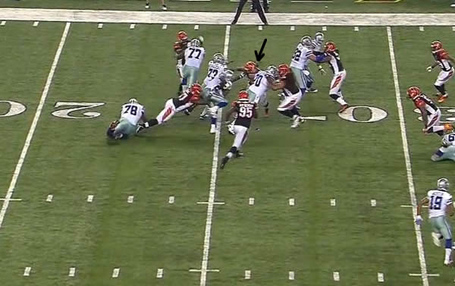 With over six minutes remaining in the second quarter, the Cowboys have double-tight formation on second and 11 from the Bengals 34-yard line. Quarterback Tony Romo fakes the handoff, steps back to avoid the hit from Wallace Gilberry and throws the football near the sidelines. Maualuga stepped up for the play-fake but, assigned running back Phillip Tanner out of the backfield, held the post near the sidelines and knocked the football away for an incomplete. 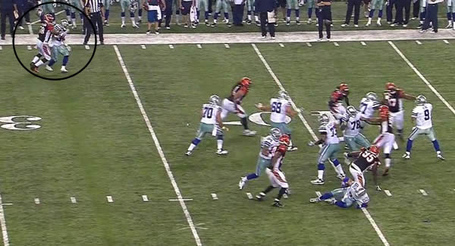 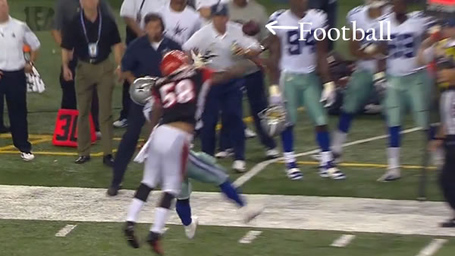 The Cowboys have 3:22 remaining in the second from their own 43-yard line. Romo hands off to Tanner. Maualuga watches, identifies and targets the rushing lane. 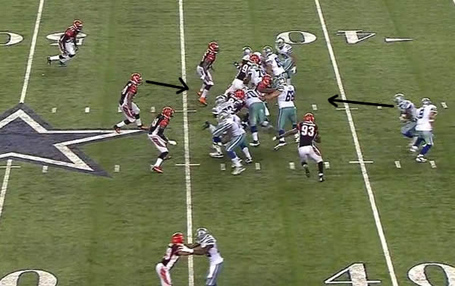 Alright, you're thinking how does Michael Johnson not make the tackle. Tanner spun off Johnson's attempt. Instead, Tanner met Maualuga for a limited two-yard gain.

There are times that Maualuga reverts to an uncertain nature, clearly a work in progress to become a better linebacker. Two consecutive runs in the first quarter by Phillip Tanner showed this, sitting back and waiting for the play to develop. Obviously the delay becomes more problematic because the offensive line begins filtering through and preventing Maualuga from having any real impact. That's the life of a linebacker and Maualuga certainly isn't the only one susceptible to this -- watch Burfict with unbiased eyes and he deals with the same from time to time.

But Maualuga's production is improving. His decision-making process appears quicker, he's more aggressive, relying on his instincts more, and the Bengals are designing a defense that uses Maualuga as a two-down linebacker. And that will improve Cincinnati's defense.