We take a brief look at the backup defensive tackles for the Cincinnati Bengals in Brandon Thompson and Devon Still.

The idea is this: Brandon Thompson will be Cincinnati's backup nose tackle (or one-technique defensive tackle), mentoring under eight-year defensive tackle Domata Peko. My quick (and dirty) analysis of Thompson is this: Good first move that sometimes lacks control but will give him opportunities to generate tackles for loss. But after that, he's in trouble. During some of Thompson's 36 defensive snaps against the Cowboys on Saturday, he'd try a quick spin or arm-rip but if a blocker dug into him and began driving, he was done.

There is a nastiness there that surfaces from time to time and the hope is that Mike Zimmer can expose that more and more as the second-year tackle develops. Just one example of what he could become: With over ten minutes remaining in the third quarter, Thompson is lined up over rookie center Travis Frederick in the one-technique. 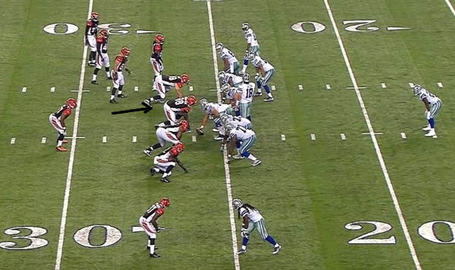 Thompson fires off at the snap, applies a powerful swim move over Frederick (before the center even has a chance to make a move). 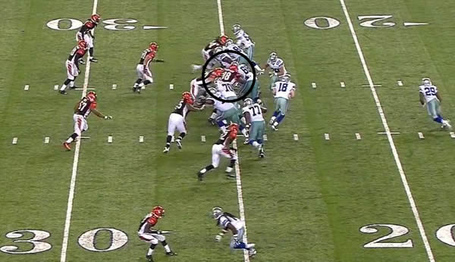 Now Thompson has position, but Frederick is making a last-ditch effort to push Thompson out of the lane. All of this is going down when Kyle Orton is only processing his second step towards running back DeMarco Murray. 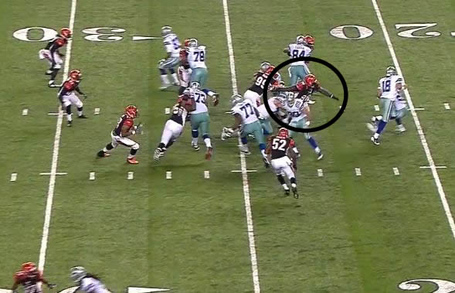 Now that the exchange is made, Murray finds Thompson breaking down in front of him. He can't move left or right, so he attempts to spin away from the him -- it worked for him most of the game anyway, why not against second-year inexperienced defensive tackle? Perhaps because Thompson is a big dog in a big dog's game (what is with the dog references today?). 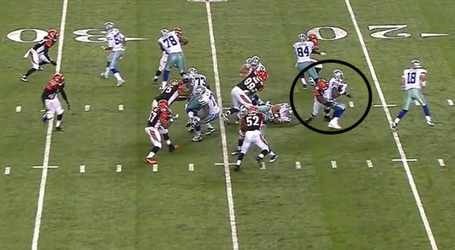 Thompson grabs Murray in mid-spin and drops him for a three-yard loss. This is almost Pekoian when Domata breaches the line of scrimmage and makes a play -- rather than the boring, hold up a blocker play that people usually ignore.

Fellow defensive tackle Devon Still, selected earlier during the same draft, followed that up with a play of his own. Second and 13 from the Cowboys 23-yard line with 10:05 remaining in the third, the Cowboys show three-wide with Murray in the backfield. Still and Thompson play the three-technique while linebacker J.K. Schaffer and Vinnie Rey are assigned the A-gap.

Still takes on left tackle Tyron Smith, shoving him back momentarily before discarding the tasteless bubble gum to wrap Murray for a limited three-yard gain -- with Dontay Moch, who would have secured a roster spot from Saturday's performance if the position wasn't so stocked. 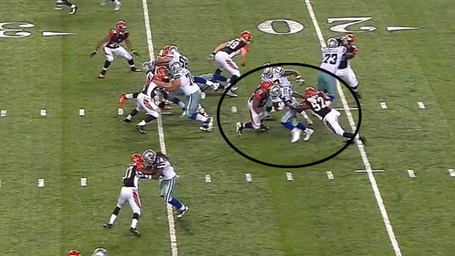 In truth the Bengals defensive line struggled against the Cowboys at times, but it wasn't as alarming as one would think on the surface. Many of those breaking-runs that gained chunks of yards, wasn't so much a defensive lineman being dominated as it was perfect play calls, directed at players that are struggling against the run. Like Jayson DiManche, who was easily turned inside as the outside linebacker was assigned with contain on Murray's 13 yard run -- or J.K. Schaffer simply selecting the wrong lane to attack on Murray's succeeding 15-yard sprint.

But one play that I really liked from the defensive line came with 4:21 remaining in the third. The Cowboys have first and goal from the Bengals seven-yard line. 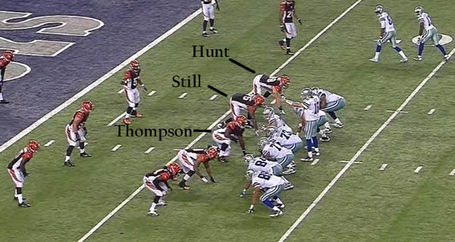 Thompson had an explosive collision into Frederick that drove the center back, stalling the drive-block just enough for Thompson to monitor the exchange. Devon Still held up Doug Free, who was targeting a linebacker. Still trailed the guard to eventually find the cutback lane that DeMarco Murray would use. Margus Hunt was away from the play, so the blocking assignments didn't account for him. 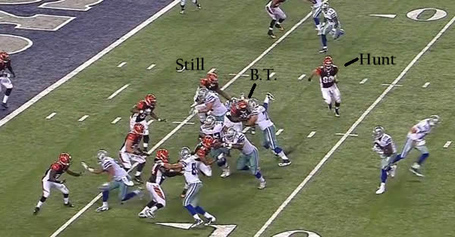 When Murray cut back, he had three defensive linemen to contend with. Thompson, who had gained the advantage to Murray's left while Still and Hunt were unblocked and zeroing in on the ball-carrier. 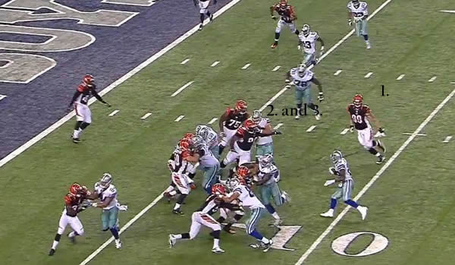 Still and Hunt make the stop for a limited one-yard gain. 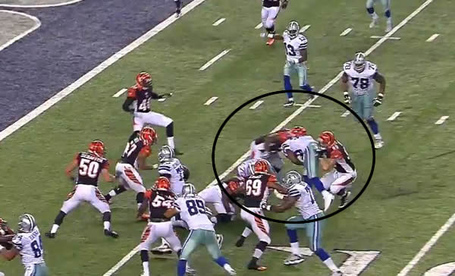 This is but a sample of the team's youth movement on the defensive line. Well, younger than the superstar starters like Geno Atkins, Michael Johnson, and Carlos Dunlap. But Still, Thompson and Hunt have the talent, the nastiness, and bravado to make an impact as backups this season.