We take a look at how Taylor Mays performed at linebacker against the Chicago Bears. Our quick read, not bad... but the sample size was very limited.

When reports surfaced that the Cincinnati Bengals were giving Taylor Mays a peak at linebacker, I was suspicious. This is a guy known as a liability in pass coverage, so why would the Bengals use him as a linebacker in obvious passing situations? Logically thinking, they had no choice. With Emmanuel Lamur suffering a season-ending shoulder injury a week prior to the regular season, and no free agents that interested them, the Bengals tested Mays at linebacker with cramming sessions from coach Paul Guenther (ala, Vontaze Burfict after Thomas Howard's injury last year). It was really their only option -- unless they kept Maualuga as a three-down linebacker, but that, to me, is not an option.

Watching the film, I came away believing that Mays looked the part. He wasn't really tested by Bears quarterback Jay Cutler and most of the plays that he was actively involved in, were check downs to Matt Forte with Mays in zone coverage (so he was in the neighborhood, not on the back's hip like he would be in man). He played man coverage over Martellus Bennett, who wasn't a target when Mays shadowed the tight end, and Forte. Of his 13 snaps (mostly all at linebacker), 12 plays had him dropping into coverage (only one play was a called run).

Now the team is being somewhat defensive by refusing to label what Mays is or where he played. During Monday's presser, Marvin Lewis was asked how Mays performed at linebacker. "Well, Taylor didn't play linebacker, but in Taylor's snaps he had, he did OK." Even Mays isn't sure what the position is called, saying "I don't know what the position is called. I just did what (Bengals defensive coordinator Mike Zimmer) told me to do." Bengals linebackers coach Paul Guenther admitted that "I get in trouble if I call him a linebacker" but added that Mays "didn't miss a beat at whatever you want to call what he's doing." In the immortal words of legendary head coach Vince Lombardi, "what the hell is going on out here."

With over 11 minutes remaining in the first quarter, the Bears have second and 17 on Cincinnati's 30-yard line. Jay Cutler is in shotgun with five receivers. Taylor Mays shows blitz off the right edge, but shifts to the spot usually reserved for the middle linebacker. 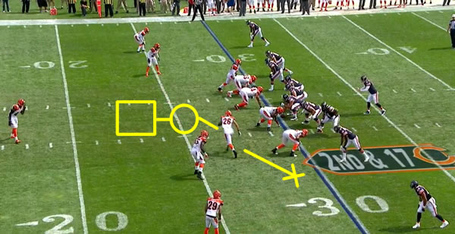 The pass went to left where Leon Hall and Vontaze Burfict disrupted the pass and forcing the incompletion. On the following play, Mays hovers over the A-gap just to the right of Vontaze Burfict. Both showed blitz, but strafed to their respective zones. Mays initially locked into the slot receiver until he flared towards the sidelines. 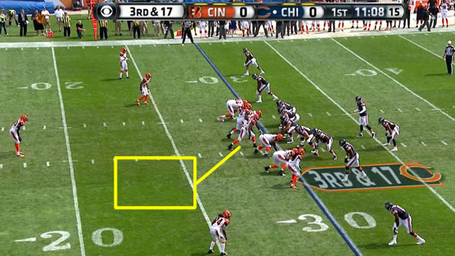 But it was Brandon Marshall's post over the middle with Burfict covering that Jay Cutler exposed, picking up 18 yards and converting the third-and-17. With 7:50 remaining in the first quarter on third and 14, Mays stands just off the line of scrimmage and back-pedals to the short zone that linebacker are usually patrolling. 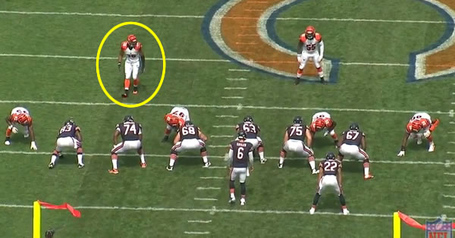 Cutler checked down to Matt Forte where Mays and Burfict made the stop on the 10 yard reception, forcing the Bears to punt.

With two minutes remaining in the half, the Bears have third and seven from their own 34-yard line. Mays is pressuring the A-gap, but the play is man coverage. Mays has tight end Martellus Bennett (look at the line of scrimmage for No. 26 and watch him shadow Bennett).

With :42 seconds remaining in the first half, the Bengals have first down at the Bengals 44-yard line. Mays stations himself at the position normally reserved for linebackers and the Bengals ran a cover three. Mays leans towards the sidelines, strategically the best position in the neighborhood for Forte's check-down route. 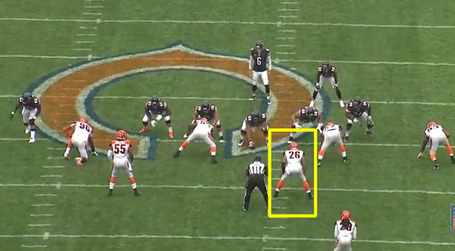 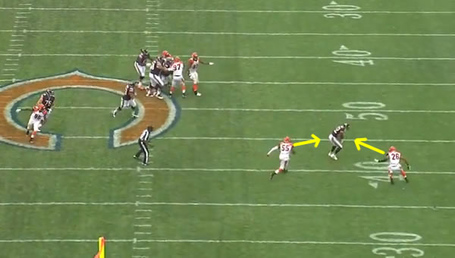 So yes, Mays played linebacker. And most of Mays' production against the Bears as a linebacker appeared more man-coverage against tight ends and running backs when he wasn't responsible for a zone. With 11:22 remaining in the fourth quarter, Mays goes weakside in a spot usually reserved for linebackers over Matt Forte. 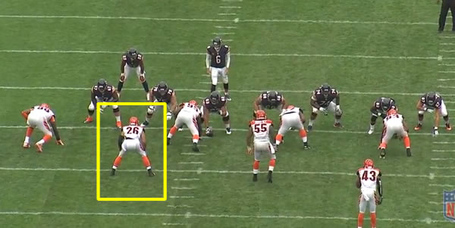 I thought Mays was competent at what the team asked of him. Again, he wasn't really tested and the sample size (13 snaps) was fairly limited. Is a conversion likely? Not based on what the team says, but maybe it's only the start of an eventual move, especially if they keep turning away visiting free agents.