Greatest successes for Andy Dalton coming in the second half

Andy Dalton hasn't been perfect and he's made his share of mistakes. But during Cincinnati's two wins this season, he's made the plays when they've mattered the most.

Share All sharing options for: Greatest successes for Andy Dalton coming in the second half

But the second half has been the critical rebound that Cincinnati needed to win both games this season. Against the Steelers, the Bengals were tied at half time -- and in hindsight, Pittsburgh is a team that needs a lot of help. The Packers responded to Cincinnati's 14-point lead six minutes into the game, scoring 30 unanswered points. In both situations, the Bengals devised momentum with second half adjustments that's providing an early season theme of coming through when it matters the most.

Cincinnati game-planned a heavy passing philosophy against a relatively bad Pittsburgh Steelers team, leading to an ineffective offense punting the football four times on seven possessions, with the final being a fourth down Hail Mary to conclude the first half in a 10-point tie. After a quick three-and-out to open the third quarter, the Bengals consumed nearly 21 minutes of clock in the second half using a balanced philosophy with an efficient 9/13 passing by Andy Dalton.

Though the 27-yard touchdown to Giovani Bernard was a product of the rookie running back outpacing the entire Steelers defense, Dalton had good throws that helped Cincinnati move the chains and sustain drives. With 10:40 remaining in the third quarter at their own 25-yard line, Dalton quickly identified the open zone when his four receivers ran 5-10 yard curl routes, anticipating the defense's reads -- and Pittsburgh's obsession with Giovani Bernard. 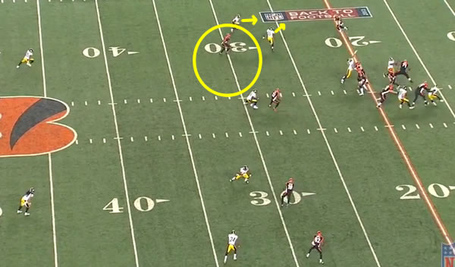 The wide open Jermaine Gresham powered his way through Pittsburgh's defense for a 26-yard gain. But it was a beautifully thrown third down pass with 12:32 remaining in the game against the Steelers that helped Cincinnati sustain the drive. Later in the period, the Bengals have five-wide with Marvin Jones wide right with William Gay covering. Jones runs an out on the short-side of the field. 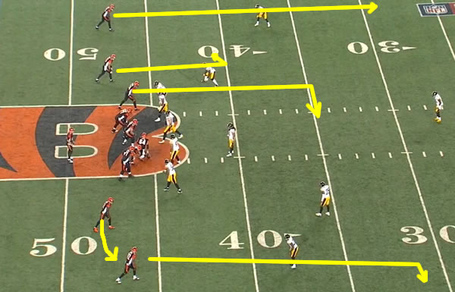 Dalton's throw hits Jones in stride, just off the covering cornerback but with enough room for Jones to complete the reception.

Both throws sustained those respective possessions, leading to a ten-point swing on a touchdown and field goal respectively.

After the Green Bay Packers took a 30-14 lead midway through the third quarter, Dalton completed nine of his final ten passes with 132 yards passing and two touchdowns for a perfect passer rating of 158.3. With 4:44 remaining in the third quarter, down by 16, A.J. Green is singled-up with Sam Shields on the outside. It's a timing route with Green designated on a ten-yard hook. Green, the team's best route runner, stops on a dime and turns towards Dalton, who released the football by Green's first stutter step. It's an eight yard gain.

Two plays later on first and ten from the Packers 20-yard line with 3:55 remaining in the third, Dalton takes the snap in three-wide formation with Green wide right. Dalton finds a wide open Green down the right sidelines for a 20-yard touchdown, reducing Cincinnati's deficit 30-21. 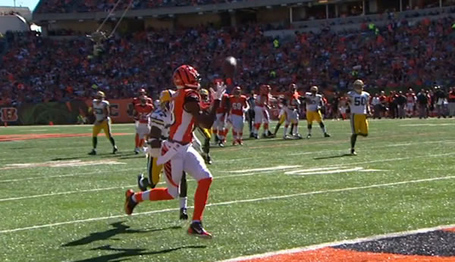 With 11:04 remaining in the fourth quarter, the Bengals have first down from the Packers 11-yard line. Cincinnati bunches to the left, with Marvin Jones running a fade towards the back left pylon. After badly beating Tramon Williams, Jones found himself wide open while Dalton floated the football for Jones to run underneath it (and made a beautiful catch).

The win gave Dalton his sixth fourth-quarter comeback win in his career, which is already more than what Aaron Rodgers has compiled in his great career.

Yes, the defense had a ton to do with Cincinnati's wins. We look at it this way; the mental toughness that Cincinnati has developed continues to build. After four turnovers in the first half, the Bengals offense recovers and chips away at Green Bay's lead for Terence Newman's eventual game-winning fumble return for a touchdown.

"It shows you have to play until the end, you never know what’s going to happen in these games," Dalton said after the game. "There wasn’t anyone that got flustered. We knew coming out we had to take it one drive at a time. You score, and score again and get a chance to cut the lead down. We stayed on top of our game plan and made plays to put us in the position to come out with a win."

During the second half in all three games combined, Dalton has completed 34 of 43 passes for 376 yards passing, three touchdowns and no picks for a passer rating of 126.4. Furthermore, the Bengals have outscored the Steelers and Packers 30-14 in the second half during Cincinnati's wins over the past two weeks. They're sustaining drives at a 50 percent conversion rate on third down (in the second half of all their games combined) and nearly ended as many possessions with points (four touchdowns, one field goal) as punts (6).

Is that to suggestion Dalton is without the problems? No. He's turned the football over four times in three games (arguable if one or two of his picks are even his fault). Of the 43 total drives (not including needs to end a half or game), the Bengals have either punted or turned it over during half of their possessions -- and nine have ended as a three-and-out. Would we like to see a better first half, save for one or two possessions where the Bengals dominate before collapsing? Of course. But if given the choice, we'll take second half Andy every time.