We take a look at the early first quarter of the Packers-Bengals game, where things looked very good for the Bengals. They used tough running and short throws with great runs after the catch to take an early 14-0 lead.

Play #1 - After the opening kickoff sailed out of the endzone for a touchback, the Bengals set up on their own twenty yard-line. They start with two-tight end set, but with Tyler Eifert in the slot and BenJarvus Green-Ellis lining up as the outside receiver on the right sideline.

Dalton's initial read is to Tyler Eifert, but Eifert slips making his cut to the middle and blanketed by his defender. Additionally, Clint Boling is pushed back into Dalton's lap almost immediately, so Dalton decides to tuck it and run for a yard. At fault: Eifert and Boling.

Play #2 - Still in the two tight end set, Eifert now lines up next to Gresham, both on the right side. This is a handoff to Green-Ellis to the strong side.

The left side (Whitworth, Boling, Cook) all seal the backside, while Zeitler and Smith secure their blocks at the point of attack. Gresham and Eifert both maintain their blocks downfield. Green-Ellis's patience pays off, as the inside linebacker, Brad Jones, over-pursues to the outside and Green-Ellis bursts through the gaping hole between Cook and Zeitler for ten yards and a first down.

Play #3 - First and ten: Eifert, Gresham, and Sanu setup with bunch on the left. Green-Ellis, flanking Dalton to the left, gets the handoff. He hits the A-gap but Zeitler's assignment successfully disengages to make the tackle for a four yard gain.

Play #4 - Green and Sanu are out wide while Gresham is in line right. Eifert lines up in the left slot with Green-Ellis behind Dalton.

It's a play-action play where Dalton rolls out to the backside and throws to Gresham on the run. Gresham catches it and stops, letting his defender over-pursue. He cuts up field and powers through several defenders to fall forward for a gain of eight yards and a first down - six yards after the catch.

Play #5 - 1st & 10 from the CIN 43 - Green and Sanu line up only a few yards away from the line. Gresham is in line right. Eifert is lined up as a fullback and Green-Ellis is in behind Dalton.

Dalton takes five-step drop and fires a laser to Mohamed Sanu, before the receiver makes his cut to the sideline, showing good anticipation by Dalton. Sanu catches the ball just in front of the first down line. Green Bay's secondary tried to make a play on the ball, but missed and Sanu ran for 23 yards after the catch.

Play #6 - 1st & 10 from GB 25 - The Bengals continue to run with two tight ends and Green-Ellis. Sanu and Green are out wide, while Eifert and Gresham are both in line (heavy on the left side).

The run is to the right side. Andre Smith gets pushed five yards behind the line of scrimmage, while both Zeitler and Cook didn't get much push either. Green-Ellis falls forward for a two yard gain.

Play #7 - Sanu is out wide right with Eifert in the right slot. Gresham is in line left, Green is slot left, and Green-Ellis motions out wide left.

Eifert, Gresham, and Green each run the same route - straight up field then cutting right 5 yards past the line of scrimmage. Green gets double covered, Gresham gets blanketed by a Packers linebacker. Eifert has less than a yard of separation as he heads to the right sideline. None of them are open. It looked like Sanu and Green-Ellis were just clearing space up the sideline.

Dalton decides to tuck it and run. There's a big hole between the defensive tackles but Dalton is tackled from behind for a three yard gain.

Play #8 - First third down of the day, with about four yards to gain. The Bengals substitute for the first time, bringing on Marvin Jones for Eifert, and Gio Bernard for Green-Ellis. Jones lines up wide right. Gresham, Green, and Sanu are in a bunch to the left. Bernard is to Dalton's right from the shotgun.

Sanu delays his route for a half step, then cuts across the middle of the field. Gresham's defender and Sanu's defender run into each other, leaving Sanu's crossing route wide open. The protection is good, including Gio Bernard's block on AJ Hawk, so it's an easy catch and throw for Dalton.

Sanu catches the ball at the first down line and runs for ten more yards after the catch. 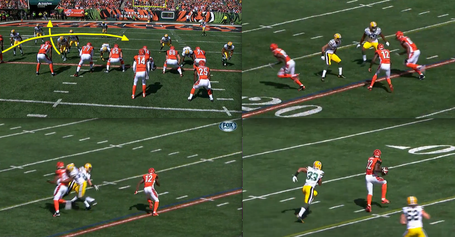 Play #9 - First and goal from the five. Green and Sanu line up out wide right, with Sanu stacked behind Green. Interestingly, the Packers choose to cover the two Bengals receivers with 3 defensive backs.

Dalton hands off to Bernard, who initially runs straight forward. He avoids the massive traffic jam in front of him and cuts sharply left with smoothness. Unfortunately, cornerback Sam Shields was defending the left outside corner with good leverage, perhaps expecting help inside.

Bernard decides to cut upfield again to avoid Shields. AJ Hawk saves a touchdown by shuffling all the way across the line of scrimmage to meet Bernard head on. He plows into Bernard, stopping him for a two yard gain.

Play #10 - Green and Sanu line up out wide on each side. Eifert and Gresham are both in line on the right side. Sanu motions across the formation and stops behind Whitworth.

Dalton hands off to Bernard, who sprints to the outside right. The offensive line all get good blocks, especially Andre Smtih. Eifert and Gresham both push their defenders back initially, but they can't hold onto the block for long. Bernard is forced to split the two defenders. He gathers his feet and launches from the three yard line. He bounces off one defender and supermans through the air with the ball outstretched. He lands on his shoulders and helmet, which doesn't look comfortable, but he's fine.

The ball clearly crossed the plane in midair. Not many players can make that play. 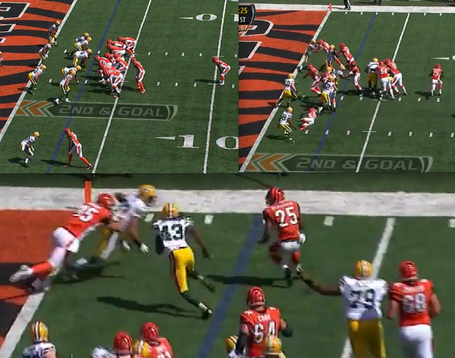 Bengals go up 7-0. It was a five and a half minute drive, with eighty yards covered in ten plays.

Second kickoff - Mike Nugent's kick is short, very short. It lands on the 7 yard line. That's a full 18 yards shorter than the opening kickoff from the Packers.

The mistake helped the Bengals immensely. Green Bay's return man Jeremy Ross can't get his hands under the ball in time. He muffs it and several Bengals dive for the loose ball. Ross and Marvin Jones reach the ball simultaneously, knocking it out from each other's hands. Orson Charles and Taylor Mays both have a shot at it, but it's Taylor Mays who recovers the ball on the two yard line.

Play #11 - First and goal from the two. AJ Green is out wide left, with Sanu on the right hash mark. Eifert and Gresham are both in line on the right side.

Dalton hands off to Green-Ellis who punches straight up the gut and dives through a tiny gap between Zeitler and Smith. He powers through the mass of people to stretch the ball over the plane. 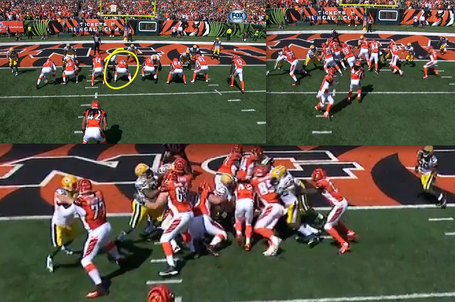 Bengals are now up 14-0. They scored fourteen points in twelve seconds. Unfortunately, the Bengals wouldn't score again until the end of the third quarter.