The Bengals defense forced Aaron Rodgers into his worst game in years with a strong pass rush early, and some strong work in the secondary. Usually, not at the same time.

The football world has been trying to figure out how the Bengals defense held Aaron Rodgers and the prolific Green Bay Packer offense to such limited production last Sunday. It's hard to nail down, frankly. Early in the game, the Bengals got home with pressure that seemed to disrupt Rodgers' rhythm and even scare him into feeling ghost pressure. Later in the game, Rodgers had success with quick passes - until defensive ends Michael Johnson and Carlos Dunlap capped off strong days by disrupting passes at the line of scrimmage.

Rodgers had his share of non-pressured bad throws, and had plenty of success too. He connected on several back shoulder throws, especially to Jordy Nelson, and threw a rocket to Randall Cobb in the middle of the field on a play where he had about seven seconds to find an open man. But outside of a couple of big plays - longest of which was 30 yards - Rodgers was forced to check it down frequently and the Packers resorted to cut blocking late in the game to open up throwing lanes on quick passes.

I don't think that the Bengals did anything schematically special to slow down Rodgers. For the most part, they played man coverage underneath with a single high safety. Mike Zimmer used some zone blitzes out of Dick LeBeau's book. These require the strong safety and weak linebackers to read inside receivers' routes and react accordingly. While they had some success, I don't think this scheme specifically led to confusion, but if you want to learn more about it check out this piece by Chris Brown. On a few and-long downs, the Bengals deployed true zone coverages as well.

Early on, the Bengals saw strong plays from everyone en route to holding the Packers' first five drives to 40 yards and two field goals, including three drives that started inside the Bengals 40.

Let's first start by looking at the scheme Mike Zimmer employed for most of the game. There is one gleaming example in this game of scheme disconnecting Rodgers from his receiver.

In this first quarter play, Zimmer slightly disguises a defense that he'll run a lot on the day. The pre-snap alignment suggests two deep safeties over man coverage underneath - though Nelson is also lined up over the slot. Both linebackers are lined up between the defensive tackles, as they were for much of the day. Rodgers needs to decide if one or both are blitzing, covering Starks out of the backfield, or sprinting out to cover tight end Andrew Quarless in the right slot. 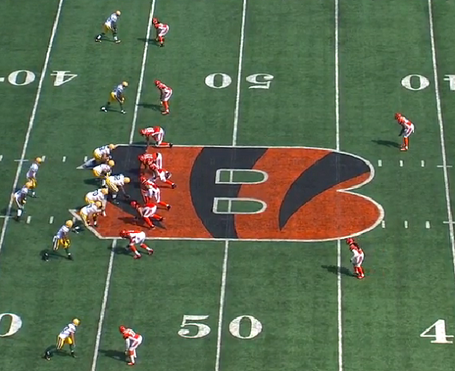 The defensive line is spread out - the ends are playing 9-technique, and both tackles are playing 3-technique. This is predicated toward rushing the passer. Both linebackers would be responsible for the A-gap between the center and the guards if it's a running play.

Rodgers ends up getting Cover-1 Robber. Maualuga drops into a shallow zone to take away the short- and intermediate-middle of the field, while Nelson ends up waiting for Quarless, who chips Dunlap, to release into a route. 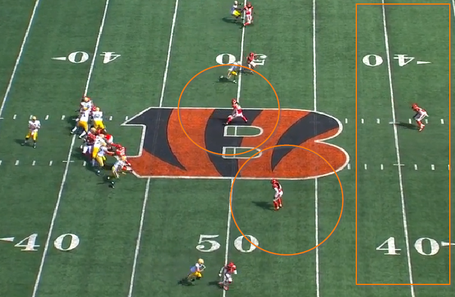 Rodgers had no issue getting the right protection called, keeping in six blockers and a chip block to protect against five rushers. His receivers are running three seam routes. However, Rodgers expects Jordy Nelson to try and get outside position on Terence Newman, who has given up inside position. Seeing this, Nelson goes inside while Rodgers' throw goes outside - a throw Rodgers probably thought was going to a spot only his receiver could make a play on the ball, and away from the high safety.

These are the looks that Rodgers was contending with all day. He had to diagnose pressure, determine whether he was facing a zone blitz or man coverage, and make the right post-snap decision. He saw a mix of Cover 1 with a robber zone underneath, a fair share of Fire Zone coverage over zone blitzes, and some Cover 1 Man Under. The beauty comes from the simplicity, in the end, and this disguised coverage and pressure scheme had the Bengals in the position to make plays all day.

The first such effort came on an ill-advised bubble screen to Randall Cobb on the Packers' first throw of the game. Rodgers gets his first look at the defense he'll see all day: George Iloka is deep, Reggie Nelson is on the line of scrimmage, and there's press man on the outside. 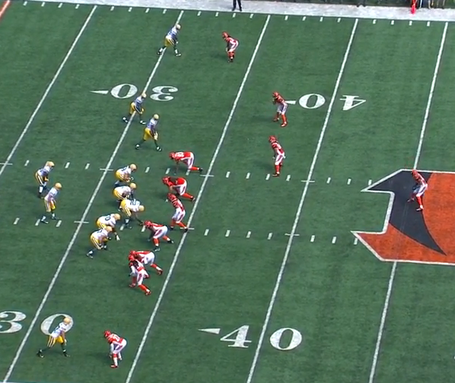 Rodgers faked the hand-off and quickly rifled it out to Randall Cobb in the flat. The play design either expects Leon Hall's first step to be backwards, or for Cobb to make Hall miss. James Jones and Jermichael Finley have one-on-one blocking assignments to give Cobb some space. Unfortunately for the Packers, Hall sees it coming. He notices Cobb's first step is lateral, and as soon as he sees Rodgers pull the ball out of the play fake, he breaks for Cobb. 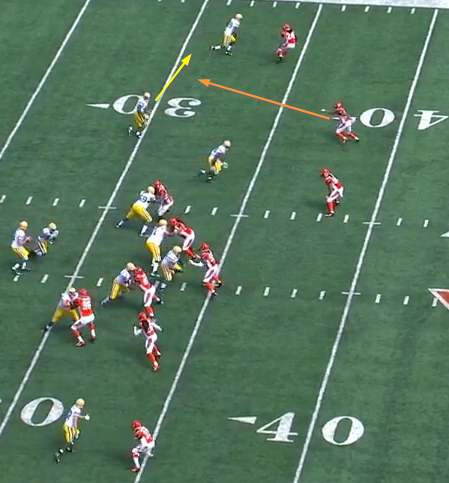 As soon as the ball gets to Cobb, Hall is on him. Chalk one up to an excellent individual effort to recognize the play and execute an open field hit and force an incomplete pass.

A few drives later, Michael Johnson's pass rush saved a touchdown on third-and-seven. The Bengals show a similar single-high look, with a twist. George Iloka has dropped down from his safety position to cover Randall Cobb in the left slot, while Leon Hall shifts into the spot Nelson occupied on the line of scrimmage. Nelson is the single high safety this time. Since the tight end is inline this time, Vontaze Burfict is between the tackles but is shading the tight end's inside shoulder. Taylor Mays shows an A gap blitz look. Rodgers is probably reading a corner blitz from Hall and maybe a blitz from Mays, but he's got man on the outside and might have a one-on-one mismatch with Iloka on Cobb. 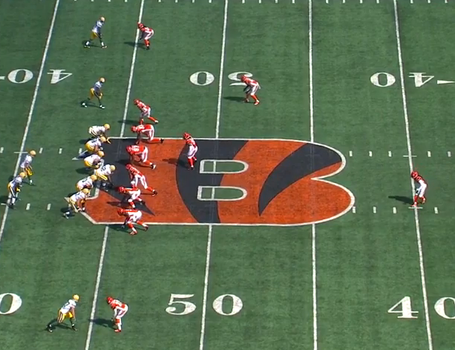 Instead of playing man, though, Burfict will occupy a short zone. So does Carlos Dunlap, who has dropped out of his left defensive end position into a zone that no one will enter, while Hall and Mays come on the blitz. The left tackle, David Bakhtiari, picks up Hall, while Atkins engages guard Josh Sitton, and Michael Johnson comes flying inside to meet center Evan Dietrich-Smith. With a head of steam, Johnson bowls over Dietrich-Smith and is closing in on Rodgers just as tight end Andrew Quarless comes wide open in the seam. Here's a side-by-side look from two angles.

Reggie Nelson isn't pictured above, but he's not on the right side of the defense. He's near the numbers at the 30 on the other side of the field. Rodgers must have been frustrated to walk off the field after being sacked just before getting a throw off. Here's how close it was. Watch the TE come open in the top left, Rodgers see him, and get thisclose to throwing it before Johnson is on him. This wasn't great coverage - and really, it wasn't a great playcall by Zimmer as the Packers picked up the blitzers and kept 6 in to block 5. It was another massive individual win, like Hall's earlier pass breakup, with Johnson dominating his man and saving a touchdown.

A few plays later (0:04 left in the first quarter), Rodgers footwork got sloppy on a deep pass to Cobb, but it looked like he thought he'd be getting hit soon and rushed the throw, barely stepping into it. After that, a twist by Johnson and Wallace Gilberry got Johnson free on an inside move, which stopped Rodgers from seeing Quarless come wide open on a corner route against a traditional Cover 2 zone. The pressure was working early, while the coverage forced Rodgers into a lot of check down throws when it didn't. Of course, Aaron Rodgers is going to get his, and found a groove in the late second and early third quarters.

After Hall's beautiful interception, and Terence Newman's touchdown, the defense still had work to do to stop Rodgers and the Packers from putting together a winning two minute drill. If you haven't watched the interception lately, you should click on that link and just enjoy it a few more times.

Johnson's day can hardly be overstated. He was excellent against the run, in the pass rush, and tipped the fourth down pass that sealed it for Cincinnati. Carlos Dunlap also had a few batted passes in the game, and all of these came on the Packers' last drive. The Packers were chipping away on that drive, covering 60 yards in a whopping 13 plays, using just 2:21 to do so. For the most part, Rodgers' success came on quick outs and passes into the flat on both sides of the field, each picking up 7-8 yards. As the Bengals' behemoth defensive ends began to realize this, they started getting their hands up. They knew the quick throws were coming after getting nickel-and-dimed down the field.

On the last defensive play of the game, Troy Aikman speculated that the Packers would try to take advantage of the middle of the field, as the Bengals showed man coverage outside. They changed the defensive look slightly coming out of their timeout, and appeared to have Iloka and Burfict in position to drop into a middle zone while Adam Jones, Reggie Nelson, Rey Maualuga, Taylor Mays, and Terence Newman were in man coverage. 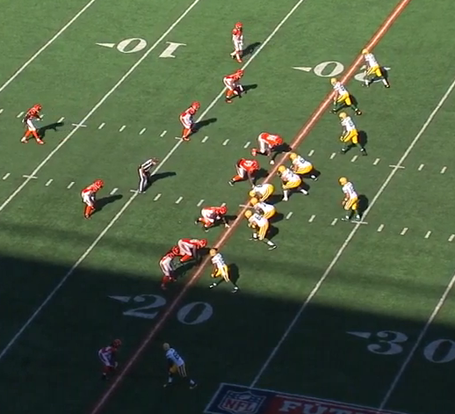 Instead, Green Bay made no secret about their intention for Rodgers to get rid of the ball quickly. Both guards and tackles dove into each of the four Bengals' defensive linemen at the snap, and Rodgers looked for James Jones on a six yard hitch on the left side of the offense.

Michael Johnson is in the process of side-stepping his cut block and and preparing to leap into Rodgers' throwing lane, showing off his agility and vertical leap in the same play to end the Packers' hopes for a comeback.

Big Plays Save The Day

In a day full of big defensive plays - Newman's touchdown and interception, Hall's interception, and Mays' special teams fumble recovery - many Bengals chipped in and contributed to the defensive victory. Michael Johnson was the star of the show, saving a touchdown in the first half and sealing the game with his fourth quarter tip. But solid plays from Leon Hall shutting down Randall Cobb, Carlos Dunlap tipping passes and stopping the run, and constant pressure in Rodgers' mind shouldn't go unnoticed.

I sat down with the film hoping to find trends in the defensive playcalling that helped limit Rodgers. I fully expected that Mike Zimmer's magic had found a combination of defenses that worked. Instead, I found a relatively straight forward gameplan littered with amazing individual efforts from different players. Zimmer did a good job of putting guys in position to make plays, and mixed in some wrinkles, but for the most part it was man under one-high, and it worked. It made me nervous all day since Rodgers had shredded the Redskins' similar gameplan a week earlier, but it worked.

Kudos to the players for stepping up, and staying disciplined, in trying situations throughout the game and pulling it out. Despite the 30 points, I think it was a defensive effort for the ages.