It's true. The Cincinnati Bengals have a lot of work remaining before they can be seriously considered as a threat. But they did a lot of good things too.

Cincinnati's performance wasn't all fire and brimstone. Despite the loss, the Bengals had good performances from several players. Granted, some marquee players didn't have the afternoon that we had hoped, like Geno Atkins or Mohamed Sanu, but there was an emphasis from others keeping the Bengals in the game.

Would we be homers to suggest that the mistakes made are the type of mistakes that many teams make in Week 1? Maybe we're being too optimistic, not calling out every player and telling them on twitter how we really feel -- seriously, people do that and they think it doesn't make them look like an idiot. Look, the Bengals will find their rhythm, cut down on the correctable mistakes and guide their season where we expect them to. It was an early speed bump and that happens in the NFL.

Do you think that Seattle is happy with a five-point win over Carolina? Or the Indianapolis Colts beating the Oakland Raiders by four... at home? Or maybe their fans are concerned that their wins weren't won by enough points. Tampa Bay losing to the Jets will bring out the miserable groans and Pittsburgh losing to the Titans -- and some of their players to season-ending injuries -- probably isn't shedding the cloudy sky in Steelers country.

Cincinnati will have their day, but it would be foolish of us to ignore the good. Such as Cincinnati's run defense.

With 11:55 remaining in the first quarter, Bengals nose tackle Domata Peko penetrated the backfield on a Matt Forte draw from shotgun. Peko used a swim move off the line of scrimmage, beating Bears center Roberto Garza.

Peko ended up missing the tackle, sliding off Forte but the play was dead for Chicago with the rest of Cincinnati's defenders swarming on the back for a two-yard loss.

Later in the first quarter, with over two minutes remaining, the Bears had first down from their 20-yard line. Forte targeted the right side where Carlos Dunlap dominated Martellus Bennett into the backfield. As the back approached the line of scrimmage, Dunlap shed the block to drop Forte for a no-gain. 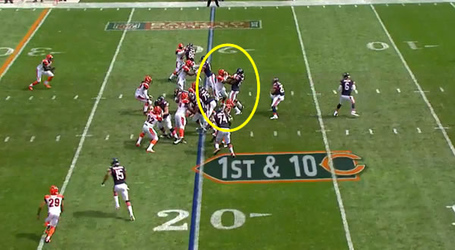 On the next play, it was Rey Maualuga transforming into a guided missile, cutting through defenders on a sweep.

Maualuga instinctively identified the point of attack by tracking Forte. At one point a blocker attempted to stall the linebacker, but he would have none of that. 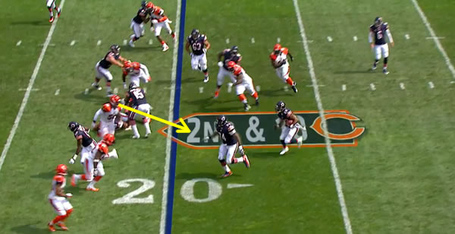 Maualuga dropped the Bears running back after a limited one-yard gain, setting up an eventual third and nine.

Brandon Thompson offered a great play with 14:18 remaining in the second quarter, grabbing Roberto Garza and shoving him out of the way for a direct shot at Forte, single-handedly dropping the running back for a no-gain. Two plays later, it's third and two with 13:13 remaining.

This was all James Harrison.

Though Harrison was busy consuming two blockers, it forced Forte to bounce outside where the sure-tackling Leon Hall made the two-yard stop.

With 7:48 remaining in the second, Rey Maualuga offered another impressive shot. But it wasn't so much going beyond what we expect of him. In fact, this is more expected but it was good to see it. The Bears had second and seven from the Bengals 39-yard line. Forte got the handoff up the middle. Maualuga not only instinctively (and aggressively) attacked the lane, but he did it going through rookie Kyle Long. 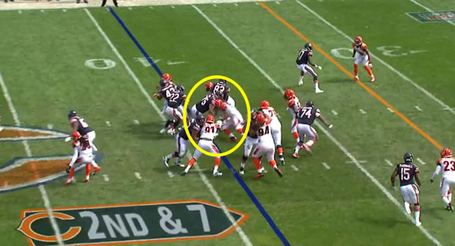 In fact, Maualuga popped Long, moved across the rookie's face and dropped Forte for a limited one-yard gain.

It wasn't all runs either -- some passes that are extended runs were defended well -- especially early in the game.

Take this first and ten situation for the Chicago Bears, on their own 40-yard line with 8:24 remaining in the first quarter. The Bears opened with four wide receivers, including Brandon Marshall who motioned into the backfield to Jay Cutler's left. In a way, it was an immediate red flag for anyone that noticed. Vontaze Burfict noticed, instinctively shifting forward towards the line of scrimmage. 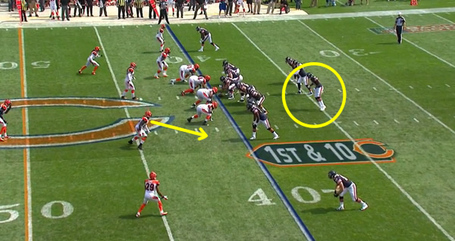 At the snap, Marshall began to flair out into the flats while Burfict moved up with Martellus Bennett as his lone obstacle. Thankfully Jay Cutler's throw didn't lead Marshall enough, allowing Burfict to beat his blocker and drop Marshall for a four-yard loss. 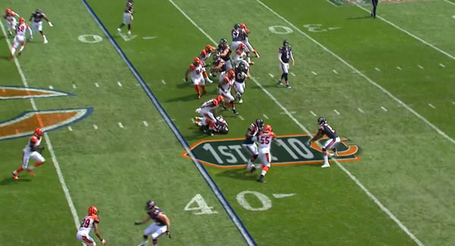 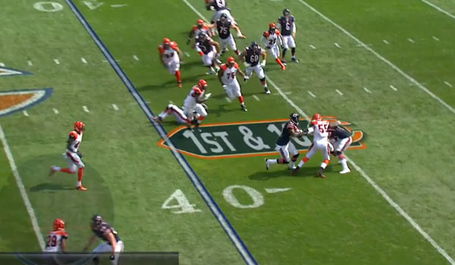 There's no doubt that the Bengals have a lot to work on if preseason prognostications are to be realized, but there were some good things in Cincinnati's loss to build on.